I thought I would share my method of making modular roads for tabletop gaming. My method is not particularly inexpensive or original. But I like the end result a lot, and I think it was worth it to spend the money and time that I did.

I’m using the World Works Games Streets of Mayhem and Urban Mayhem PDF sets. These sets retail for $11.50 each, and in my opinion are well worth it. Each street tile comes in gridless, 1 inch, and 1.5 inch grids; also the streets themselves come in clean, dirty or post-apocalyptic, for use in whatever style of game you’re playing. I opted to use dirty, 1 inch gridded tiles for mine, as I plan on using these roads for both superhero and zombie gaming. Here’s a selection of what you get. There are a lot of other things included, like asphalt/concrete tiles, parking lots, railways, and even a helipad. But I just used these basic tiles to construct my roads: straight, curved, 3-way and 4-way intersections. 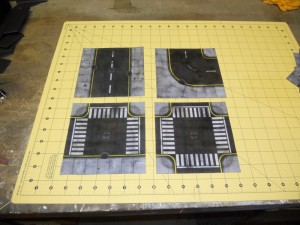 Printing these out is where you will spend the most money. I recommend you print them on high-quality cardstock, since anything thinner may cause the glue to lift and/or bleed through when you mount them. Cardstock and ink aren’t cheap. Expect to go through an ink cartridge or two, depending on how many tiles you print. I scaled my tiles to 6″ x 6″. so that I could fit four of them on one of my 2′ x2′ modular boards.

One of these sets uses the TerrainLinx templates and one uses the new, friendlier TerraClips sets;  two different ways of joining these tiles together. Basically, each of these tiles is designed to be printed out and individually wrapped around foam core squares, which in turn clip together through pre-cut slots and pegs. The result is some mighty impressive and strong modular terrain. But who the hell has time for that? Not me.

I got around it by mounting the tiles on matboard, the same stuff you use to mat pictures. A 32″ x 40″ sheet cost me $8 or so at Michael’s. I chose black with a black core, since that was best for the roads. With that in mind I cut the matboard lengthwise into 6″ wide sheets (more or less) like so. 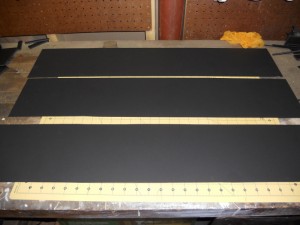 Once I had my strips, I started mounting the tiles. You can fit five tiles per strip with a little left over. I decided to make the road strips varying lengths, i.e. 3, 4 or even 5 tiles. I decided to mount the elbow curves and intersections individually for maximum customizability. 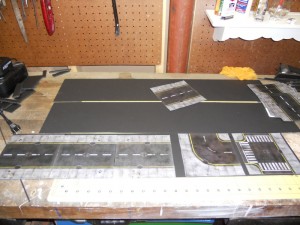 The strips are a little too wide for the tiles, which is something I did on purpose. Better to get them all mounted and trim later than have the tiles too wide for the board. Trimming them down is easy once they’re in place.

For the record, I recommend using a metal ruler with a cork back, as it won’t slip when you’re making a long cut. Unfortunately, I used this carpenter’s square and it slipped, completely ruining a length of road I had just mounted. I used some foul language then, I can tell you. Also, I recommend you don’t get shitfaced on Irish whiskey while making any long cuts, as you may forget and unknowingly allow the tip of your finger to protrude just a little bit into the path of the knife. That hurts.

You guessed it. More foul language.

Speaking of the knife, you may notice the foam board cutter I bought. This baby retails for a ridiculous $17.95 at any office supply or art store.

Don’t pay that much. It’s a fucking X-Acto knife. I got mine at Job Lot for $2.99. (I live in New England. We have Ocean State Job Lot. Folks from other parts of the country should check their bargain stores like Big Lots or Dollar Tree.)

Once mounted, the matboard is heavy enough that it lays flat (mostly). I made most of these roads in the time it took to listen to Led Zeppelin’s Presence. 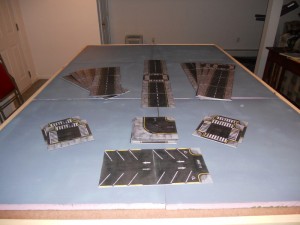 I found out that 6″ x 6″ tiles are perfect for 15mm gaming. Of course,  I do 28mm. So they’re a little small for my needs. The roads themselves are not too bad, as I can still fit my 28mm vehicles on them with a little room on each side. Where it becomes obvious is the parking lot. I could fit a bunch of 15mm vehicles in the spaces, but one 28mm vehicle takes up half the lot. Oh well.

Here’s an example of what a road system looks like made up of the tiles I mounted.

So there you have it, my way of making roads. Not as cheap or quick as some black felt with white lines drawn on it, but I really like the level of detail in the WWG tiles and wanted to use them.