Once again, I figured I’d share some of the miniatures I’ve been using for my ongoing Advanced Dungeons & Dragons 3.5 campaign.  If you’re inclined to check out more, you can find some earlier posts here and here. 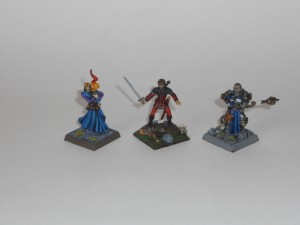 First up, the PCs. Left to right: Elvar, the mage; Azrael, the bard, and Dematose, the cleric. Elvar is Reaper’s Halmar, Young Wizard (Reaper 03449). He is holding an uncorked potion bottle in his hand, and what I painted as flame is supposed to be vapor, I guess. I kind of like the flame look, even though I clearly suck at painting fire. Azrael is a Dark Sword bard from their Elmore Masterworks line. Dark Sword makes some incredible miniatures, and this may very well be the best bard I’ve ever seen. I’m ok with the paint job, even though my diamond pattern kind of fell apart halfway through. Dematose is Privateer Press’s Bastian Kinnet, Battle Chaplain of Morrow. I’m really happy with the way he turned out. Missing from the group is the ranger, Gough. He’s missing because his player owns the miniature and wanted to paint it himself. Of course, 2 years into the campaign, he’s not fully painted yet, even though my friend has painted other miniatures in the meantime. This is because my friend is a shithead.

This is not my friend’s paint job.

If interested, this is the miniature he chose for Gough. it’s another Dark Sword miniature, this time from their George R. R. Martin line: Wildling with Great Axe. Very cool. 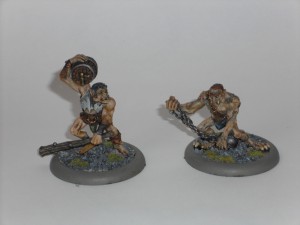 If you followed the first link above, then you know who the Cudgel Gang is. When the players last encountered the Cudgel Gang, they left a few of them alive, including the dastardly leader, Quin Payden. Well, since then, Quin added some new recruits to the Cudgel Gang, and even replaced the ones who died with  some thugs who look remarkably similar. Above are the two newest recruits, the Butcher Bruvvers. These are Heartbreaker Miniatures: Half-Troll with Ball and Chain and Half-Troll with Club, from their fantasy sculptors line. In their recent rematch, the PCs got some much-wanted revenge. They managed to kill almost every member of the Cudgel Gang, including the Butcher Bruvvers. The only one who escaped was (you guessed it) Quin Payden, vowing revenge. It’s a good bet he’ll turn up again. 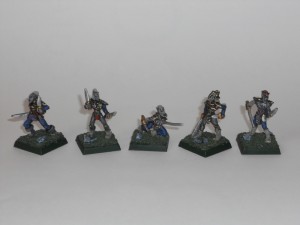 The toughest fairies you’ll ever meet.

Not long ago, the PCs wandered into a faerie ring and were shrunk down to tiny size. They were promptly taken captive by faeries. Since I think most faerie miniatures look like, well, fairies, I decided to use these RAFM Dark Elves instead. They’d been laying around unpainted since the early 90’s, and it gave me an excuse to paint them. Soon afterwards, the PCs were given a chance to win their freedom if they could perform a service for the Faerie Queene. She sent them on the very dangerous errand of stealing the crown of Tarkhagal, the Spider King.

Not surprisingly, the Spider King had a lot of spiders around as guards. The PCs had to fight their way to him, defeating swarms of these guys in the process. The tiny spiders are from Mississinewa Miniatures. The big yellow ones are from Reaper (Reaper 03055). I painted them the color and pattern of an orb spider I found online, and based them with some Halloween decoration cobwebs. In the game, the small ones attacked in swarms and had weak poison. The yellow ones shot webbing and had stronger poison. 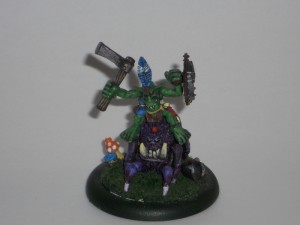 Finally the party came face to face with the Spider King. Or did they? This is Meepo, a goblin who wandered into the faerie ring years ago and escaped the faeries, only to  fall into the Spider King’s lair. For whatever reason, Meepo was immune to the deadly effects of the spider venom. Instead, it drove him mad and increased his physical attributes. The real Spider King kept him around for amusement. Meepo is an old-school Warhammer Forest Goblin Spider Rider. While I have a huge WFB Orc and Goblin army, I never used Spider Riders because I thought they looked silly. (The new ones are much cooler- looking.) I had this guy laying around though, probably the result of a trade made long ago. I figured I’d put him to use as a boss, and here he is.

After a long battle with lots of spiders and a crazed goblin, the PCs thought they had killed the real Spider King.  On their way out, however, they got a rude awakening. The real Spider King, Tarkhagal, dropped from his lair in the ceiling and blocked their exit. That’s him above. I looked high and low for a little crown bit I could use for this big spider, but I couldn’t find one. I even looked at charms for bracelets. No dice. Tarkhagal is Reaper’s Huge Spider (03049), and he is huge. His leg span wouldn’t even fit on a 60mm base. I should have included a picture of a regular 28mm miniature for comparison. He’s about 3 times the size of one of the yellow spiders above.

Well, the bloodied, weary and poisoned characters managed to subdue Tarkhagal and take his crown, thus winning their freedom from the faeries. They’re currently back to their normal size and continuing on their adventure.