With The Recent Demise of My AD&D  Campaign, I have decided to share some of the miniatures I was holding back from the blog for fear my players would see them too early. I figured I’d start with the last (and final) adventure, in which the PCs explored the long-abandoned laboratory of an eccentric (but legendary) Gnome inventor. 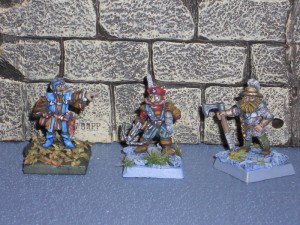 These three gnomes hired the PCs to help them explore the lab in the hopes they could find something that would be of use in repelling the evil svirfneblin who were attacking their homeland in force. The miniatures, L-R, are Reaper’s Balto Burrowell (02510) and Marius Burrowell (02959), as well as an old-school Ral Partha Dwarf, repurposed as a gnome because he scaled nicely. 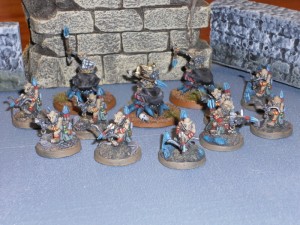 Of course, the opposition had already invaded the lab in the hopes of sacking it themselves. I decided to use Reaper’s Bloodstone Gnomes for svirfneblin. I went with a brownish skin tone as opposed to the blue of true BSGs. The majority were Bloodstone Pinners (06212). I also gave them a couple of Beetle Lancers as sergeants (14548), as well as a captain (Bata, Beetle Rider Captain 14568). 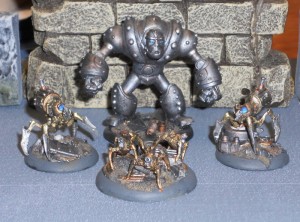 Along the way the PCs ran into some of the gnomish inventions, still active and guarding the lab from intruders. These Brass Arachnids and the Arachnid Swarm are from Wyrd’s Malifaux line. I actually never got to use the Brass Arachnids, but I’m quite happy with how they turned out. On a side note, the Arachnid Swarm was a cast iron bitch of fiddly parts that I never want to assemble again. I lost count of how many times a leg broke off. In fact, I had two Arachnid Swarms, and I gave up trying to assemble the second one. The Iron Golem is from Reaper (02728), and I can certainly find a use for him in other games as a robot or something. He was originally supposed to accompany the PCs in their quest. If you were paying attention, you may remember they’re already hanging out with an animated scarecrow. Scarecrow…Tin Man…off to (stop) a wizard…you get what I was going for here. all the above miniatures are based on junkyard bases from Taban. 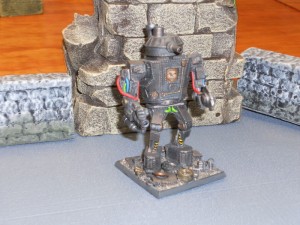 Lastly is the big Boss miniature my friends never got to face.  He’s Frank-n-Steam, from Armorcast. Unfortunately, he doesn’t seem to be available any longer, although there are still some similar Frank models on the site. Being resin, he required a lot of filling and cleanup before I painted him, and even then he still shows some bubbles and seams. I scratch built this base out of junk and bitz I had laying around. And yes, that’s a guy’s face in the chest. Much like the Iron Golem, I can use this thing as a mech suit or a robot body for a mad scientist in SuperSystem or .45 Adventure, so I’m not that bummed out that he never made it into my AD&D game.