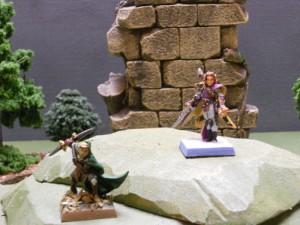 First up are some Reaper elves. (Apologies for the blurriness of the photos. I need to get a tripod.) Up high is Ardynn, Elven Hero (Reaper 14046) , while down below is Baeldrinahr, Rogue Figher(Reaper 02952). Ardynn looks more like a High Elf to me. I decided to base him on snow and I’m happy with the result, although you can’t really see it. I decided to paint Baeldrinahr like a Wood Elf, so I chose the palette and basing accordingly. Both these would have made an appearance in my AD&D campaign, if I was still running it. 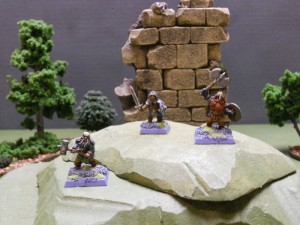 It’s never hard to get me to paint Dwarfs. These are some older Reaper sculpts that actually look kind of small compared to their more recent dwarf products. On the top are two Dwarf Heroes from Sandra Garrity (Reaper 03351). On the lower left is Sturm Jagstone, another Garrity sculpt (Reaper 02236). I love these miniatures. 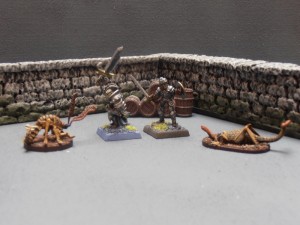 Lastly, I decided to showcase one of the all-time classic and most hated AD&D monsters: the Rust Monster! These two armored lads are about to have a very bad day. 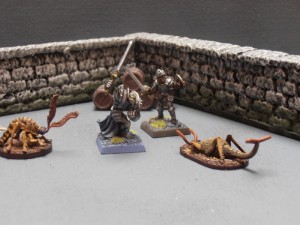 The warrior on the left with the ridiculous sword is Reaper’s Alustan Nightbreaker, Paladin (Reaper 03192). On the right is Kain Swiftblade, yet another Sandra Garrity sculpt (Reaper 02025), one of Reaper’s oldest miniatures, and one of my personal favorites. 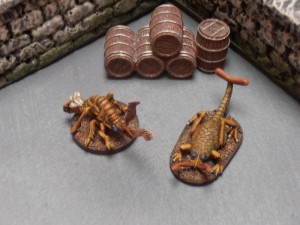 The rust monsters are a mix of old and new. On the left is Reaper’s recent “Oxidation Beast” (why get sued, after all? Reaper 03585). This one is metal (the irony!!….Oh iron-y! How doubly ironic!!!) but they make a Bones version that’s five bucks cheaper at the moment. The one on the right is a classic Ral Partha rust monster.  I really like the look of both models, and I’m pretty happy with the paint jobs.