When we last left our intrepid adventurers Bridget Rourke and Mo Shrevnitz, they had managed to obtain evidence that the Jade Hood was behind the strange disappearances of ordinary citizens in New Commerce. Bridget was able to snap a photo of some of the Jade Hood’s goons loading some suspicious chemicals onto trucks in the Warehouse District.  A shipping label from the Phillips Chemical Consortium was prominently displayed in the photo.

Bridgit went to alert the police and get the necessary warrants for a raid on the chemical plant, while Mo met up with New Commerce’s vigilante crimefighter, The Gargoyle, for a raid of their own. Meanwhile, the nefarious Jade Hood, aware that his schemes are threatened, sends a crew of goons to the chemical plant with orders to blow it sky-high…

Actually, this is technically Scenario 3, as Scenario 2 is a scenario to be run in the event the heroes are captured. The scene is an industrial complex, with lots of machinery and crates to hide behind. This gave me a good chance to break out my Aftermath Modular Terrain. I’m glad I bought in on this Kickstarter, as it’s really some great stuff. I bought in for $100, and the stuff shown below isn’t even half of what I got. The machinery was made by a fellow TMPer, Russell95403, and it works well for this scenario.

Basically, the good guys, Mo and The Gargoyle, need to find two key pieces of evidence and get out of the warehouse before the bad guys blow it up. The bad guys need to plant two time bombs and detonate them. The heroes get extra Victory Points if they can disarm the bombs or prevent the bad guys from planting them at all. 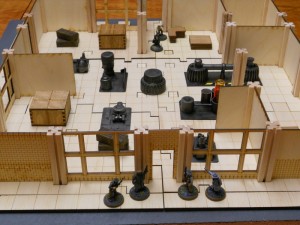 This was the initial setup.  Once again, my buddy Matt took the part of the heroes. Opposing them, played by me, were two Grade 2 Enforcers, Chopper Murphy and Frankie the Fish; and two Grade 1 Gat Men, Limey Joe and Pete the Dentist (you don’t want to know how he got that nickname).

The scenario relies heavily on encounter markers. There are 12 in all, 6 for the heroes and 6 for the villains. Heroes can’t activate villain encounters and vice-versa. The interesting part is the type of encounter (hero or villain) is only revealed when the encounter marker falls within line-of-sight of one of the models on the board. The model still has to come in contact with it to activate it. Among other things, the pieces of evidence and the bomb locations are encounters which must be resolved, which means that each side is trying to get to their encounter markers as quickly as possible, while dodging the bullets and fists of the opposing team! 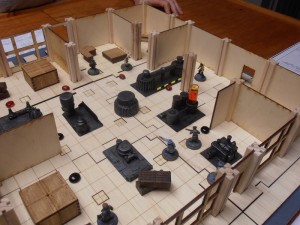 On the first turn, both sides rushed in, trying to get to their encounter markers as quickly as possible. The villains activated one of theirs: a Tong Assassin! Not content to trust the safety of his schemes to his henchmen, the Jade Hood hired a Tong Assassin to ensure that the heroes don’t leave the warehouse alive. The assassin enters play through on of the side entrances. 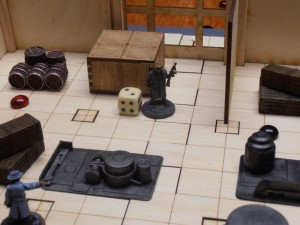 Soon after, Chopper Murphy finds one of the ideal locations to plant a time bomb. He sets it for two turns and prepares to move out of the blast radius. 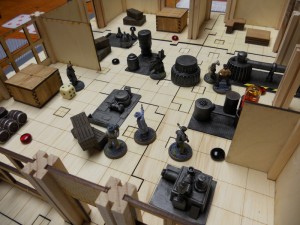 The Gargoyle knows he only has moments to act. He charges forward, guns blazing, and manages to wound Chopper Murphy. The crazed machine-gun maniac fires back, but the hasty expenditure of a Hero Point saves the Gargoyle from being riddled with bullets! Meanwhile, Mo runs at the other goons, but is intercepted by the Tong Assassin! 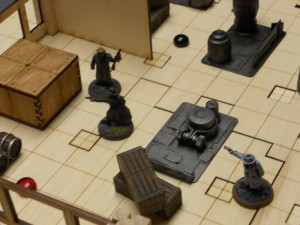 The Gargoyle rushes to the ticking bomb, and, heedless of his own safety, attempts to disarm it! He succeeds! Chopper Murphy, slack-jawed at the Gargoyle’s boldness, opens fire again; this time wounding the Gargoyle. But the crimefighter isn’t down yet! 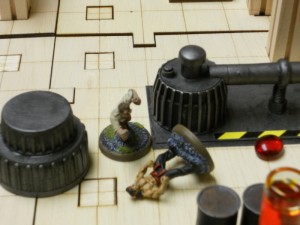 With a flurry of hands the Tong Assassin leaps at Mo, delivering the 1000 needle strike! Mo barely feels it, and delivers two punishing body blows to the assassin. The Tong assassin drops like a wet bag of dirt and doesn’t move! 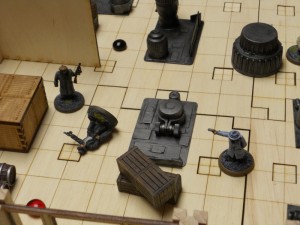 Pete the Dentist sneaks around a piece of machinery and plugs the Gargoyle in the back! The Gargoyle, still reeling from Chopper Murphy’s machine gun rain, goes down! 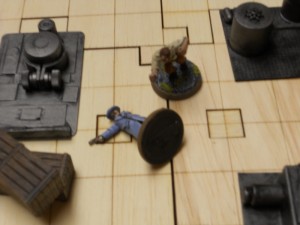 Mo takes this opportunity to charge Pete the Dentist, with predictable results. He levels Pete without breaking a sweat. I’m beginning to think no one has a chance against Mo, at lest not in hand-to-hand! 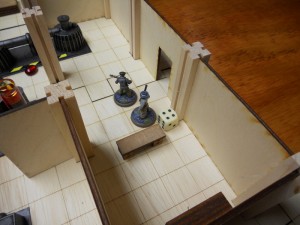 The other two thugs, Frankie the Fish and Limey Joe, activate another encounter marker and find the other prime location to plant a bomb. Frankie sets the timer for three turns. 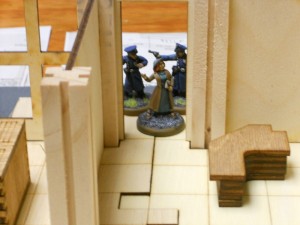 Moe triggers an encounter, still hoping to find a piece of evidence. Instead, Bridget Rourke arrives with two Rookie cops! It’s not looking good for the bad guys! 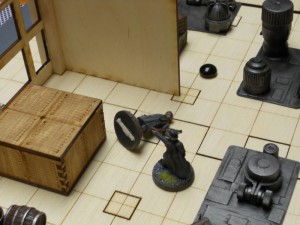 It looks even worse on the next turn, when The Gargoyle makes his Will roll and revives. Taking aim from the ground, The Gargoyle puts a slug between Chopper Murphy’s eyes! Then he gets shakily to his feet, scanning the warehouse… 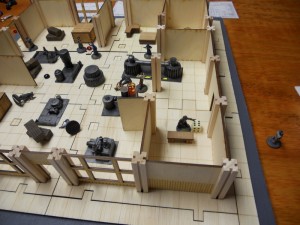 Limey Joe runs across the warehouse floor, taking a shot at Bridget Rourke on the way out. He misses. Frankie the Fish decides he’d better get out of the warehouse before it blows up, and runs off the board. But The Gargoyle spends another Hero point and sprints across the room towards the time bomb. He defuses it with seconds to spare!

Well, this turned out to be a pretty decisive victory for the good guys. The villains could only win if the bombs went off, and neither one did. The bad guys failed to kill or capture any of the heroes, even with the help of the Tong assassin. The heroes got extra Victory Points for defusing the bombs, but they could only win by finding the evidence, which they didn’t do. But since Frankie and Limey Joe fled the warehouse, the heroes had all the time in the world to search it. We decided the heroes found the evidence they needed after all.

And the Jade Hood? Well, let’s just say he wasn’t pleased. Frankie and Limey Joe won’t be returning for any further scenarios in the campaign… 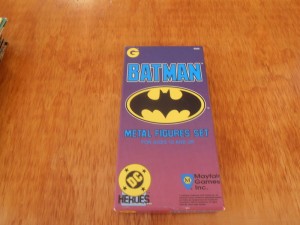 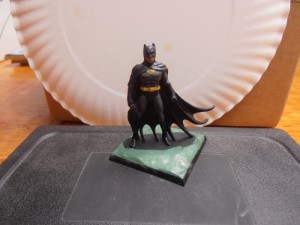 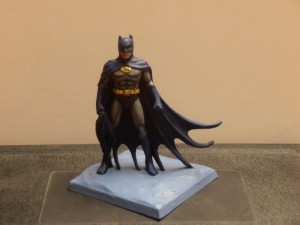 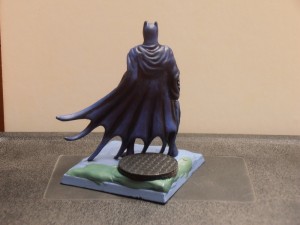 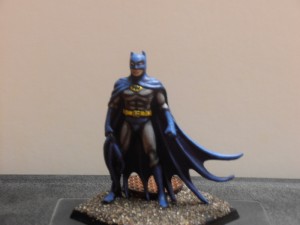 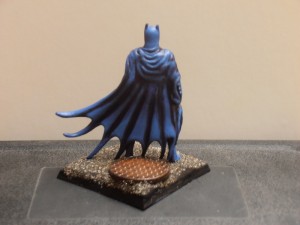