I’ve been going through miniatures gaming withdrawal lately, so I threw down some scenery and played a game all by my lonesome. I chose Battlesystem Skirmishes as my ruleset du jour. Even though I played this one solo, I managed to have a good time.

Amid ruins in an ancient forest stands an ancient watchtower, long rumored to be haunted. Anyone who has ventured there has never returned, but that has only fed the rumors of treasure and glory just waiting to be had by those daring enough to brave the danger.  Two parties of stalwart adventurers set off towards the watchtower with equal intent: to make their fortunes, destroying anything that would stand in their way. 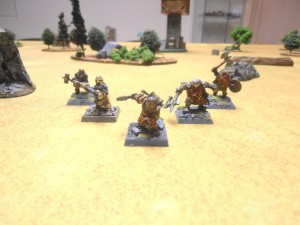 First up: a group of dwarves: (L-R) Poth, Siegfried, Grimnar, Boris, and Reglan. All are warriors with the exception of Siegfried, who is a cleric. Grimnar is the leader, an 8th level fighter. Boris and Siegfried are both 6th level, while Poth and Reglan are 5th. 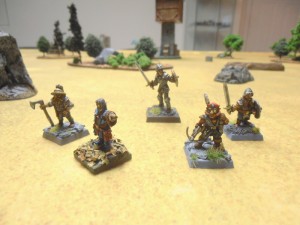 Next up: a group of gnomes and their human mercenary hireling: (L-R) Stengil, Graflin, Cavram, Durwald, and Ashlock. All are warriors with the exception of Graflin, who is the leader and an 8th level wizard. He is supported by his brother gnomes; Stengil, Ashlock and Durwald, all 6th level fighters, and Cavram, an 8th level human fighter. 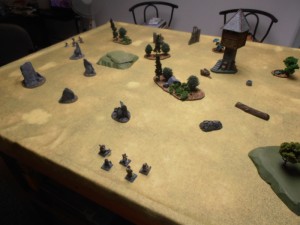 The dwarves approach the watchtower from the south, while the gnomes make their own stealthy approach from the west. Soon, they are not alone! 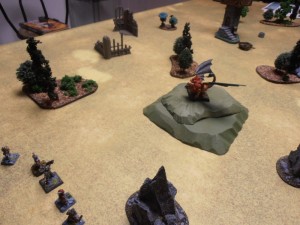 On the crest of a nearby hill, a manticore appears, bellowing a challenge! The gnomes prepare for combat! 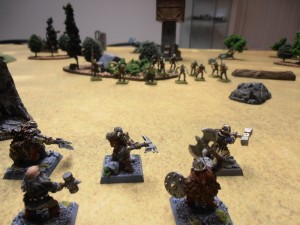 Meanwhile, to the south, the dwarves steel themselves as some zombies come lurching out of the woods! 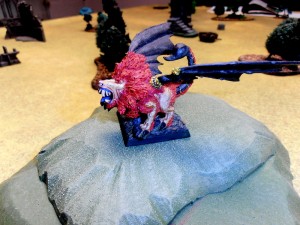 The battle is joined! No sooner do the gnomes move than the manticore lashes out with its tail spikes. It fires a volley at Cavram as the human moves towards the hill, inflicting 1 wound. Meanwhile, the zombies charge into the dwarves. Grimnar wades into the fray, easily destroying one zombie. Boris manages to wound a zombie, but takes a wound himself. Siegfried steps forward and calls upon his deity, turning 6 of them immediately. They flee from the cleric’s true faith, but not for long…

Meanwhile, Graflin, the gnome mage, casts Reduce upon the manticore! The beast fails its save and is reduced by one size level, losing one attack die and incurring a penalty on further attacks! Durwald shoots the manticore with his Crossbow of Accuracy, hitting easily and inflicting 1 wound!

At the end of the turn, a mysterious evil force rallies 3 of the fleeing zombies. They turn and shamble back towards the dwarves… 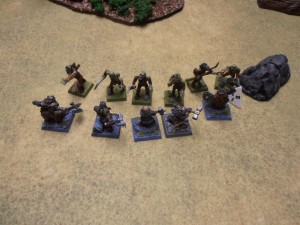 The next round, the manticore gets initiative. He wastes no time in firing his tail spikes, this time at Graflin! Even with the reduced Attack Dice, Graflin takes 2 wounds as the spikes rip through him! Cavram charges up the hill at the manticore, hitting it for 3 wounds! Graflin casts Magic Missile, inflicting another wound on the beast, while Durwald shoots it again for yet another wound! The manticore, down to 1 wound, checks morale, and rolls a 1!! The enraged beast will stay and fight to the death! (Manticores are dumb.)

Meanwhile, to the south, the dwarves square off against the zombies. Boris, Grimnar and Siegfried all put a zombie down, while Reglan wounds one. The zombies fail to wound any of the dwarves, since most of the dwarves killed them before they could fight. Since they’re undead and not being turned, zombies don’t have to check morale. They fight on. 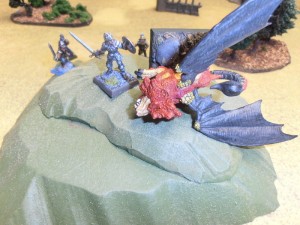 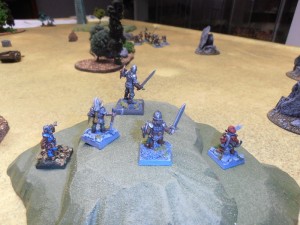 The manticore manages to wound Cavram once before the human runs it through, putting it down once and for all. The gnomes reconvene at the top of the hill, where they get their first look at the rival warband to the south, still fighting off the zombies. They set off quickly, hoping to reach the watchtower before the dwarves! 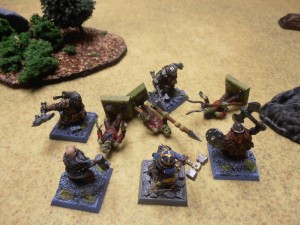 Meanwhile, the dwarves destroy the remaining zombies with relative ease. 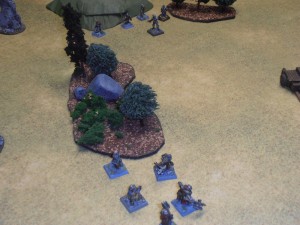 The dwarves regroup and move north, intent on plunder. They round a grove of trees only to spy the gnomes moving towards the tower! Will it be a race, or will the two parties fall upon each other??