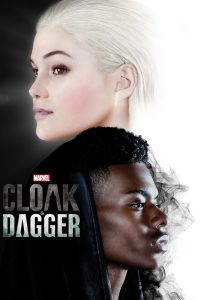 A brief interlude from my Time Trap campaign: a while back I saw an advertisement for a new TV series set in the Marvel Cinematic Universe based on third-string teenage duo Cloak & Dagger. Because the show was hyped pretty early, I forgot about it until I stumbled across it by accident. Apparently, it’s on the Freeform network, which is a network I didn’t even know I was paying for as part of my cable package. Sometimes surprises can be good.

By the time I found it, the first 2 episodes had already aired. I’ll watch anything that’s comic-related, so I watched these episodes on demand and started recording all the new ones. Tonight is the final episode of the first season.

Now, I was already familiar with Cloak and Dagger, by which I mean I knew their identities and their powers; but I wouldn’t say I was a fan by any means. In fact, I don’t own any Cloak and Dagger comics, and I own a shit-ton of comics. They never really piqued my interest. They were just kinda…there, sometimes, as guest stars in other comics.

Which is why I guess I was pleasantly surprised by Marvel’s Cloak and Dagger on Freeform. It’s actually pretty good. It could use a bit of help in the pacing department, but it’s still interesting enough to keep my attention, despite it taking 4-5 episodes to start really making things happen. The cast is great; both Cloak and Dagger are well-represented, as are their respective family members. I’m particularly impressed with Aubrey Joseph, who plays Cloak. It’s tough to pinpoint why, but I think it may be because he has a unique voice, which is an attribute I’ve always imagined Cloak would possess. 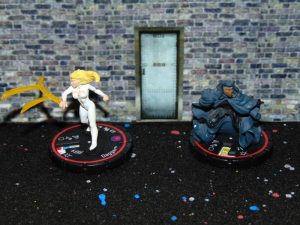 Anyway, in honor of this new show that I like, I’ve decided to paint up Cloak and Dagger for my supers collection. Both are repainted Heroclix, of course. Above is the factory paint job. 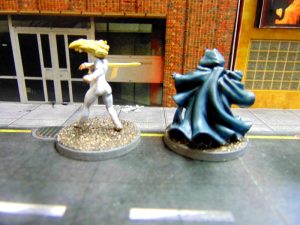 These are my repaints. Their costumes are so basic this really didn’t take very long at all. Just a bit of shading and highlighting for Dagger, mostly just highlighting for Cloak. I really hate Dagger’s daggers, which just won’t stay level no matter how many times I try to bend them into shape with hot water/cold water. I’m almost at the point where I might just clip them off. I really hate these “energy effect” things some Heroclix have.

Like I said above, I’ll watch anything comics(especially supers)-related and give it a shot; but I watch enough good TV to not have time for bad shows. I stuck with Agents of SHIELD, Flash, Preacher, Arrow and Gotham; I bailed on The Gifted, Supergirl and Legends of Tomorrow. I missed out on Black Lighting and Legion (I’ll probably watch Black Lightning, but I haven’t heard anything great about Legion, so I’ll pass). I loved Constantine (Matt Ryan was awesome as John); sadly it ended before it really got started. And of course I watch all the Netflix series, even Iron Fist, which is a huge disappointment to me as I’m a rabid Iron Fist fan. But, oh well. Hopefully Season 2 will be better… 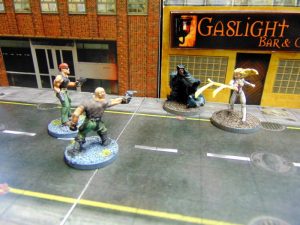