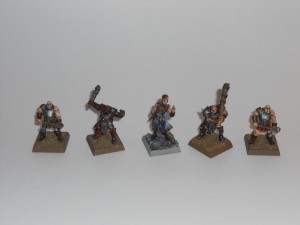 These guys are a small gang of bandits in my current AD&D 3.5 campaign. Basically they’re a group of highwaymen infamous for beating the hell out of the folks they waylay. The fellow in the middle is their leader, Quin Payden. The guy to the left of him is Karg, his lieutenant. Both are nasty fellows.

I rolled some strips of green stuff and cut off the tips, then painted them to look like coins, which I scattered on Quin’s base. I think I stole that particular technique from Cool Mini or Not. I like the end result.

Here is a rear view of Quin and Karg. I love the Dub Bullock miniature with the knife behind his back.

In the game, my players decided to fight rather than hand over their money (of course). They killed two thugs and badly wounded a third. Quin was wounded as well, but not before he got a chance to backstab the cleric and take the bard hostage. He escaped with most of their money. Karg got away, too…unscathed.

Bandits rarely change their ways, so there’s a chance they may cross paths with the party again. My players would love some payback.

2 thoughts on “The Cudgel Gang”