This may as well be called the Marvel Team-Up or Marvel Two-in-One you never read. That’s because…well, you’ll see.

I like to have a scenario in mind when I post an After Action Report so that it reads as more than just a random slugfest. For this one, I was inspired by all those Hostess ads in the old Marvel comics of the early 80’s…ones where a Marvel hero had to thwart a jokey villain in his attempts to steal a shipment of fruit pies or cupcakes. So I figured he Wrecker has a hankering for some Twinkies and doesn’t want to buy a box when he can just steal a shipping crate full of them. He enlists the aid of the rest of the Wrecking Crew and grudgingly promises to share his Twinkies with them. Standing opposed to this nefarious crime are none other than the Amazing Spider-Man and the ever-lovin’ blue-eyed Thing! (I could write comics.) 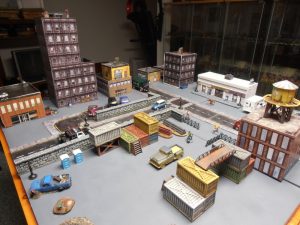 A fine day in Manhattan…

Hey! That’s the Wrecking Crew in the shipping yard! 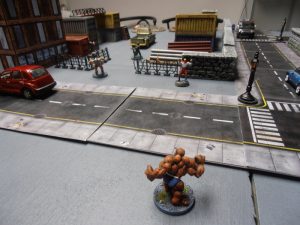 Aw, crap. And I was having a good day. 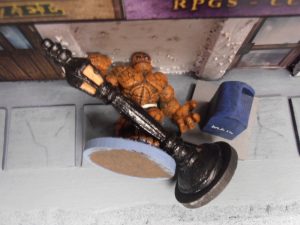 The Wrecking Crew gains initiative, thanks in part to Thunderball’s Clever Boost, which gives them one extra die towards initiative. Piledriver wastes no time in grabbing a nearby lamppost and tossing it at the Thing. The resulting hit does 3 Body damage and knocks Thing back into the wall, knocking him down. 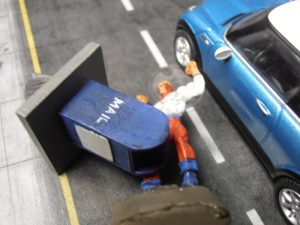 Thing gets up and grabs a nearby mailbox and beans Piledriver with it, returning the favor. the hit only caused one damage, but knocked Piledriver back 5″ into a nearby Mini. Meanwhile, Bulldozer moves towards Thing to keep him away from the shipping yard. 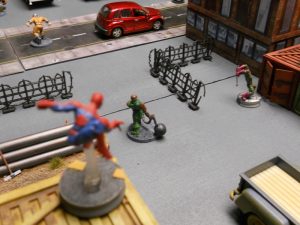 Spider-Man trades his move for a Leap, leaping 32″ down onto the corner of the shipping crate. He tries to web up the Wrecker, but fails to get even a single goal. That old Parker luck strikes again! 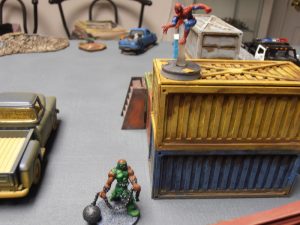 “Let me help you down from there…”

Spider-Man is too high up for Thunderball to attack him unless he throws something, but Thunderball tries something different…he attacks the shipping crates! His gamble pays off as he scores a whopping 10 goals, enough to destroy the crates!

Wrecker screams at Thunderball, “There better not have been any Twinkies in there or they’re coming out of your cut!” 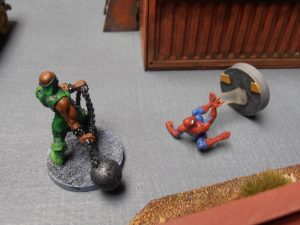 Spider-Man takes no damage from the fall (it’s less than 2″), but he is knocked down in front of a huge guy with a wrecking ball. Not really where you wanna be.

Finally, Wrecker attacks the shipping crate in front of him in search of Twinkies. No luck…this crate contains only pink Sno-balls. Yuck! 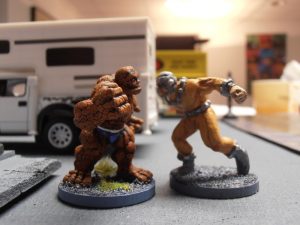 The Wrecking Crew hold onto initiative. Bulldozer does what he does best and charges the Thing, but ol’ Rockface just squares up and meets him head-on. They exchange punches, but neither one lands anything damaging.

Thunderball takes his shot at Spider-Man, but Spidey manages to wiggle out of the way of the wrecking ball…for now. He follows up with a roundhouse to Thunderball’s chin that cracks him for 3 damage! (For some reason I forgot to apply knockback. Not that it made a difference overall, but still noteworthy.)

Piledriver moves towards Thing, but doesn’t reach him. 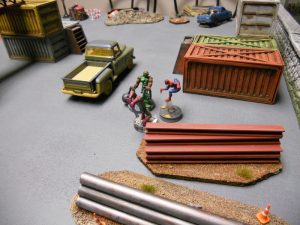 Finally, Wrecker gets annoyed and charges Spider-Man. After all the dice are rolled, Wrecker hits Spidey for a whopping 7 damage! Spider-Man fails his KO check and is…well, KO’ed! 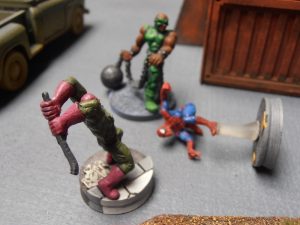 Best not to think about what happens next…

The Wrecking Crew keeps initiative. Piledriver charges Thing, but Thing sees him coming and shrugs it off. 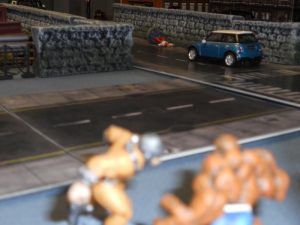 “It’s Clobberin’ Time!”  Thing hauls off and decks Piledriver with a Haymaker punch, knocking him back 25″!!! Piledriver fails his KO check and is out!

Bulldozer once again attacks Thing, but does no damage.

Off-camera, Thunderball takes an action to “ace” Spider-Man. This means exactly what you think it means.

Wrecker moves to another crate and rips it open. Lemon cupcakes! Arrrgh!

Thing finally gains initiative! He makes a quick recharge roll for Haymaker and succeeds, allowing him to use it again this turn. He tries it, but fails to damage Bulldozer. 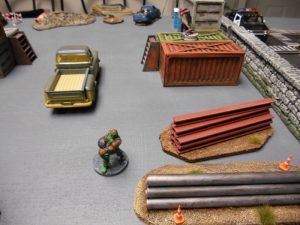 Thunderball moves towards Thing. Wrecker moves upstairs towards a new crate. There has to be a crate of Twinkies somewhere!

The villains gain initiative. Bulldozer, now 5″ away from Thing, charges him! Thing takes 3 damage and needs to pass a KO check. He succeeds! 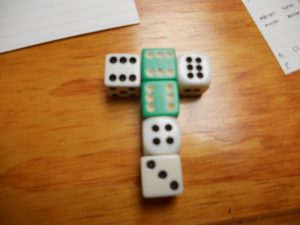 Thing stands up and recharges his Haymaker successfully. He hauls off and creams Bulldozer with this roll. 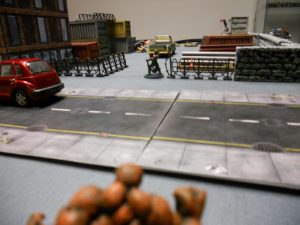 Can you find the Bulldozer in this picture?

Bulldozer fails to resist even one and goes flying 45″! He fails his KO check and is out!

Thunderball continues getting closer. Wrecker finds only apple-filling Fruit Pies in his crate.  “Curse you, Fruit Pie the Magician!” 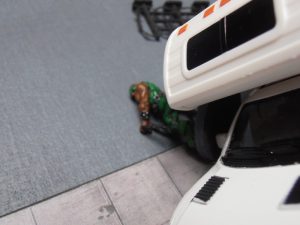 Thing can barely keep standing, so he figures it might be wise to keep some distance between him and Thunderball. He picks up a nearby camper and throws it at the villain, hitting him and inflicting 3 damage!

Thunderball pushes the camper off himself and stands up, moving towards the Thing with obvious ill intent.

Wrecker rips open another container…Funny Bones???!!! How did these get here? Hostess doesn’t even make these!!! 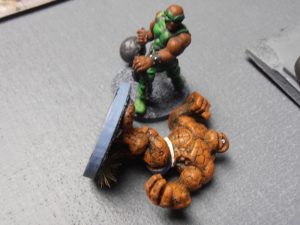 Thunderball charges Thing and hits him for 1 damage. As he loses consciousness, Thing wonders if he might have been better off just letting the Wrecking Crew have the damn Twinkies.

First off, this was a blast. It took me around 45 minutes to play this, and that was with me looking up rules, taking photos and logging the action for this AAR. Once I learn the rules completely, I would imagine this game would have taken me 20 minutes or so.

That’s awesome. This system is so easy and quick that I imagine it would be quite simple to get an entire set of linked scenarios done in a couple of hours. An entire campaign in one afternoon? Sounds good for folks like me that can’t seem to get his friends all together more than twice a year.

Also, in case anyone’s interested, here are my builds for these heroes and villains.

All Bricks, so all have Super Strength as their Major power. (Yes I know technically you’re not supposed to have more than one of the same archetype (except Wild Cards) on the same team, but I defy anyone to tell me that any member of the Wrecking Crew is anything BUT  a Brick.

Again, I know I broke the rules here by giving them more powers than allowed, but as as I said before, it’s tough to picture these heroes (especially Spidey) without all of these powers. Having more powers clearly didn’t help them in the above battle. It’s not a matter of game balance for me…it’s about having fun!