It’s been a while since I painted some old school miniatures. I decided to do yet another Grenadier TSR boxed set from yesteryear. Last time it was Wizards, this time it’s the wee folk: Halflings! 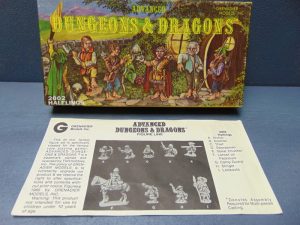 Unlike the Wizards, I never owned this set growing up. I bought it off eBay about 2 years ago. The box is in great shape. The miniatures were painted, but not well. So I stripped them down to the metal before repainting. 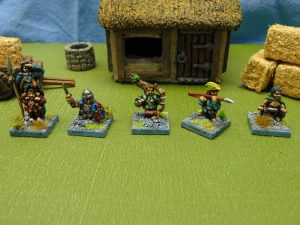 One of the reasons I love these classic miniatures is that they have a lot of character. There’s usually one or two per boxed set that really stand out, especially for the time. In this set, one of the miniatures that stands out most for me is the Halfling lookout team, all the way on the left. Continuing left to right, we have a Swordsman, Camp Guard, Spear Chucker, and Thief. Both the Thief and the Swordsman are pretty good sculpts even by today’s standards. The Spear Chucker, despite being equipped with an atlatl, is my least favorite miniature in the set. I’m also not overly fond of the Camp Guard, because they included a ridiculous-looking tree for him to lean on. I think it would have been a better miniature without the tree, and you wouldn’t have even had to alter the pose all that much! 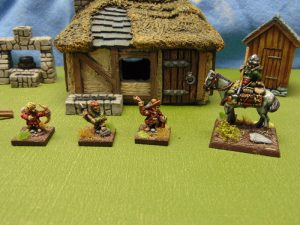 From left to right, the remaining models in the set include an Archer, an Axeman, a Slinger, and a Lancer on Pack Mule. I like all these models, but I especially like the Lancer. He would be great to represent the “Shiriff” of a Halfling shire. I assumed the haft of his spear behind his hand had broken off at some point, but looking at the enclosed picture, it seems he wasn’t modeled with a full spear haft to begin with. I fixed that by making one out of some 5/64 brass rod, thus giving him a full spear, and I like the resulting look much better. 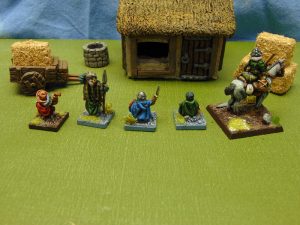 Here’s a view of some of the Halflings from the rear. I didn’t use any white flock on the horseman’s base. I think the color is due to a reaction between the glue I used and the matte sealant spray. I think it looks ok, like the last remaining frosts of the season. I’m not sure if I’ll paint over it yet.