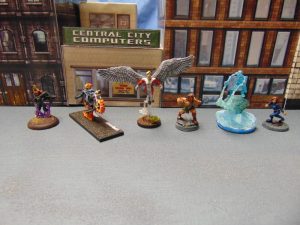 The original Champions debuted in the mid-70’s, and to call them a lackluster team would be an understatement. Despite some interesting roster choices, the Champions never really gelled as a title or as a team. Nonetheless, I figured I’d give them a little repainting love. (Actually, that kind of happened by accident. I had painted up Black Widow and Darkstar for unrelated projects and realized I had one-third of the team. I decided to paint the others up when I could.) 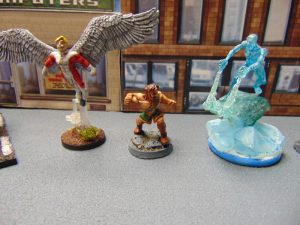 Angel isn’t completely faithful to the Champions version, which is a good thing. Angel’s costume back then was one of the most hideous costumes ever to grace a superhero (look it up). This one is much better, and I am a big fan of this particular sculpt of Angel. Keen-eyed visitors to Dead Dick’s Tavern may recognize some superhero overlap: Darkstar was painted some time ago along with the rest of the Soviet Super Soldiers for my Breeder Bombs campaign, while Iceman was also done a while back. Last post he made an appearance as one-third of Spider-Man and His Amazing Friends. 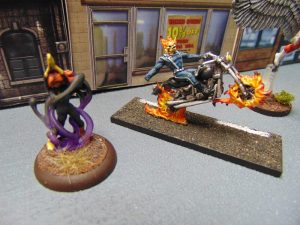 Both Iceman and Ghost Rider contained that translucent plastic I loathe so much on Heroclix models. With Iceman, it’s his whole body and the ice slide he rode in on. It wasn’t much of a big deal to just dry-brush him with white and build a base out of frosted sea-glass, the same technique I used on the Penguin and Mr. Freeze. The base took longer than the model itself. (As a side note, I’m particularly happy with the way Hercules looks. His original clix paint job was underwhelming, to say the least.) 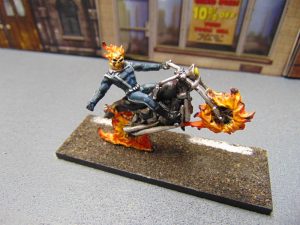 Ghost Rider had that translucent yellow plastic everywhere on the model where there is flame. I painted proper flames on his head and bike and this is the result. Originally, I thought this model was a tad too small to be in scale with the rest, but it’s not so bad after all. (The whole time I was painting him I was humming the Rollins Band’s version of “Ghost Rider Motorcycle Hero”.) I contemplated adding a chain, but then remembered this is the original Johnny Blaze Ghost Rider, so no chain needed…which turned out to be good, since I was considering buying some spiked chains from Reaper, only to find a pack of them costs 10 bucks! A bit steep for bits I will probably only use once. I also thought about making the flame trail go all the way to the end of the base by sculpting extra flames out of green stuff, but I lack the confidence and skill to do so. Oh well.

I’m much more likely to use the individual models in games rather than basing a scenario around this particular team, but you never know what could happen!

2 thoughts on “We Are the Champions”