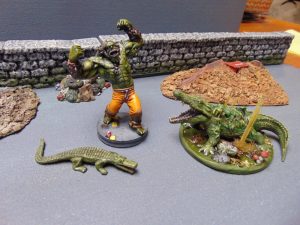 I find the Knight Models 32mm Batman miniatures to be terrific sculpts, but they’re generally too pricey for me to justify their purchase, except in rare cases.  I caved and bought the Frank Miller Batman, for example, because I just had to have it. Same thing with Killer Croc, here.

This version of Croc is based on the Batman: Arkham series of video games by Rocksteady. In total, there are four games. Arkham Asylum, Arkham City, Arkham Origins (a prequel), and Arkham Knight, which closes out the series. Croc appears in every game as a boss except for Arkham City, where he is mentioned, but doesn’t actually appear. (Technically, he doesn’t appear in Arkham Knight unless you purchase the DLC Season of Infamy, which is so good and so worth it I don’t know why you wouldn’t.) In the comics, Croc started out as a big ex-wrestler with a skin condition. He has since devolved through a half-man/half-reptile all the way to a full blown human/dinosaur hybrid complete with a tail! 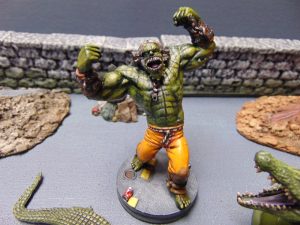 This version most accurately reflects Croc’s appearance in Arkham Asylum (no tail yet), the first game in the series. Much like the game, I love the miniature, too. I posed him with a couple of reptilian friends. The one on the left is a child’s toy I got at a flea market somewhere. I’m pretty sure I got two, but I can only find one.  The other one is a large Dungeons and Dragons Dire Crocodile. I bought it for use as a Pulp monster, but when I decided to paint Killer Croc I thought it was a good excuse to paint the Dire Crocodile as well.

The Dire Crocodile is quite large. Here he is next to a 28mm Reaper Inkeeper. I built a lip of green stuff around his base and applied scenic water with an eyedropper (sayonara, eyedropper). Three days later, the water still hasn’t cured and it sticks to everything it touches. Hugely annoying. Looks ok, though. It will look better when I can add some flock/leaves to the rim of the base, whenever the “water” dries. 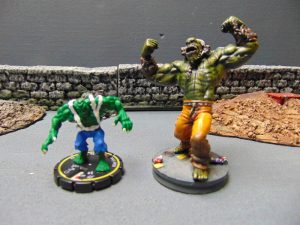 Speaking of huge, even scaled at the 32mm range, this Killer Croc is gigantic. Here he is posed with a Heroclix version of himself. (I’m a big fan of Heroclix for many reasons, but I think everyone seeing this picture can understand why I splurged on the Knight  version of Croc.)

And here he is with a Reaper Ogre, a Heroclix Hulk, and a Heroclix Question. (Incidentally, here are my repaints of Hulk and The Question.) The Question model should give a good indication of how a “normal” 28mm model looks next to Croc.

This is somewhat problematic. Croc is big, but he’s nowhere near the size and mass of the Hulk. From a scale perspective, I find this irksome. Doubtful I would ever use them in the same scenario, but still…

I tried to repaint a Heroclix Solomon Grundy recently, but standing him next to Croc was laughable. In the comics, they’re about the same size; so too in the Knight Models range. But mixing and matching Knight Models with Heroclix may work fine with normal sized figures, but not so well with big guys like this.

Which means I’m probably going to have to buy the Knight Models version of Grundy. And while I’m at it, their version of the Hulk. But at $35 apiece, that’s a lot of cheddar for only two miniatures.

2 thoughts on “Tick, Tock…Time to Feed the Croc!”