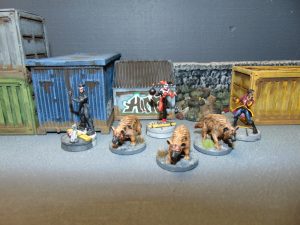 It’s funny how sometimes projects get completed without any clear plan whatsoever. From the crime-filled alleys of Gotham City: three of Batman’s most notorious femme fatales: Catwoman, Harley Quinn, and Lady Shiva!

These miniatures were in the freezer bin wherein all the Heroclix models I intend to repaint and rebase currently reside. A couple of months back I was painting up some Hasslefree martial artists, and I thought a Heroclix Lady Shiva might make a good addition to the theme. I fetched her from the freezer and rebased her, intending on repainting her whenever I got the chance. No rush, you understand. Just a miniature to add to when I had some extra paint I needed to use. 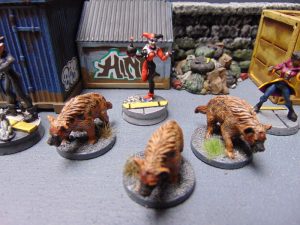 Then I picked up some miniatures in a Craigslist lot that included these AD&D hyenas. I immediately thought of Harley Quinn, and into the freezer I went yet again. A quick rebasing and she joined Lady Shiva in the side pile.

Then, while playing Arkham Knight on the PS4, I thought about the Heroclix Catwoman figure who was cooling her heels in the freezer. I took her out and rebased her with this Reaper cat familiar, and off to the side pile she went.

As fate would have it, these miniatures got painted at pretty much the same pace: a dab here and there while I did other things. Then one afternoon I took them out of the side pile and finished all of them off. I added some highlights and shading to the pre-painted hyenas and the Gotham Girls were done! I’m not wild about how Lady Shiva’s raccoon eyes look, but she’s ok for tabletop gaming. Maybe I’ll touch her up a bit. I’m also thinking of adding some gloss varnish to Catwoman’s costume and whip, but I’m not sure yet.

Incidentally, if you’re wondering about the conspicuous absence of a certain red-headed botanist-turned-arch criminal, all I can say is stay tuned. She’ll be here soon!