It seems I took the month of January off from blogging, quite accidentally. For Christmas I was gifted with Mass Effect: Andromeda for PS4. It was released back in March of last year, but I’m not the kind of (video) gamer that needs to get a game as soon as it’s released. Thus I tend to spend less money on video games overall, as I can wait until the price drops. I am a huge fan of the Mass Effect series, and although this latest game was (unfairly, IMO) derided,  at least in comparison to the previous trilogy, it has accounted for my free time throughout January.

Anyway, it’s nice to be back.

I rarely pick up Wargames, Soldiers & Strategy magazine these days. Although it’s a fine publication, it’s not for me, as it is primarily geared towards the historical wargamer, and even casual visitors to this site will know I don’t fall into that category. The other day I found myself at my newsagent (see what I did there? I used a British term) by complete happenstance ( I was purchasing coffee and donuts for a work meeting at the Dunkin’ Donuts next door), and, since the latest issue of Miniature Wargames magazine hadn’t arrived yet, I gave in to whimsy and purchased WS&S #92. As expected, it had little to interest me as far as gaming goes. I am unfamiliar with most of the historical periods and battles covered throughout the issue. But what issue #92 did have was a worthy article by the great Rick Priestly, entitled “Time, Tide and Yesterday’s Lead.”

You might think Mr. Priestly waxes nostalgic for the early days of Citadel and Warhammer miniatures, but he quickly sets the record straight. Despite his involvement in Warhammer’s development, his particular enthusiasm is the Minifigs line of the 70’s, as those are what led him down the garden path to wargaming.

I must confess that since I live in the United States and I was born a good decade or so after Mr. Priestly, I am unfamiliar with Minifigs. Like so many others, I started gaming through Dungeons & Dragons, circa 1983 or so. I’m pretty sure I got the red box for my 10th birthday and it took me a year or two to start running “The Keep on the Borderlands.” I never played a miniature wargame until I was in college in the early 90’s. Predictably, my first introduction came through Warhammer 40K, then quickly moved to WFB. But I had already been collecting and painting miniatures before then. Despite all my failed attempts to introduce them into my roleplaying games, I found them really cool (an obviously still do). I certainly share nostalgic feelings for the miniatures that got me started down my own path, some 35 years ago. And those miniatures, primarily, are Grenadier and Ral Partha fantasy figures.

The first set of miniatures I ever bought was the often-reissued Grenadier Tomb of Spells set. It’s the second one down in the left column. Starting from the top left and continuing clockwise, we have Specialists, Hobgoblins, a Dragon Lords set that once included paints, Thieves, Denizens of the Swamp, Orc’s Lair, and Wizards. The Wizards set was the second set of miniatures I ever bought, and I repainted the set a couple of years ago. You can see the results here, if so inclined. 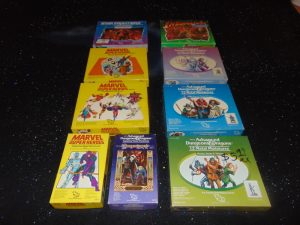 With the arrival of AD&D 2nd Edition, TSR started packaging miniatures under their own name. The above sets are examples of this era. I bought the Marvel Super Heroes and Dragonlance sets when they came out, and a friend gave me the Magic-Users set long ago. The remaining sets were all recent eBay acquisitions.

I probably paid too much for the Indiana Jones set (it’s rare). I paid less than I thought I would for the Star Frontiers and other AD&D sets, but again, probably more than I should have considering the quality. I’ve said this elsewhere: this era of miniature manufacture leaves a lot to be desired. The sculpting is pretty sub-par across the board. Scale is pretty much an afterthought, even between models within the same set (Star Frontiers is by far the WORST for this). I have been painting some of the Marvel miniatures for use in my supers gaming alongside Heroclix models, which should give you a idea of how random the scale is. Some are compatible with Clix models while some are on the small side of 25mm. To top it off, I have no idea what metal was used to cast this line of miniatures, but for some reason, they do not take paint well. Prior to sealing them, even casual handling can cause the paint to rub off, which is kind of a pain during the painting process. 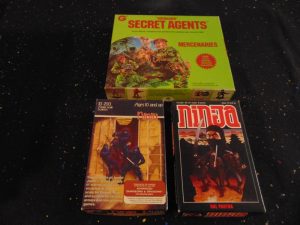 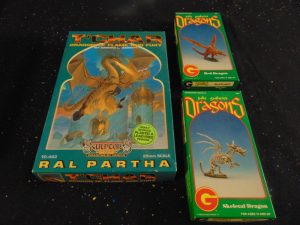 The last of my old sets are above. The Grenadier Secret Agents set is really good, containing lots of mercs and soldiers for use with Top Secret or any other skirmish wargame. Grenadier released two sets of these. I know I had both at one time, but I can’t remember what happened to the other set. (As an aside, the box art above was painted by famous Grimjack artist Flint Henry!) Below them is an exceptional set of ninja by Ral Partha. I recently bought a second set, because as everyone knows, you can never have enough ninja. The bottom row contains dragon models; a Ral Partha T’Char (one of the best dragons produced, IMO) and a couple of Julie Guthrie Grenadier Dragons. I painted up her Red Dragon a while back. You can see it here. 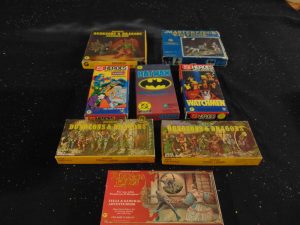 Nostalgia, as Mr. Priestly aptly observes, exerts a powerful force that drives one from affection for times gone by to collector’s obsession. All of the above boxed sets were purchased either on eBay or at a flea market over the last couple of years. With the exception of the Skeleton King’s chariot (top right), all these sets are complete and pristine. (I even managed to replace the 54mm Batman set with one that included a Joker this time.) The DC Heroes sets were a real find at $10 apiece, all bare metal! I painted up the 54mm Batman a few years ago, and recently painted the Grenadier Halfling set above. Batman is here; the Halflings are here.

Which brings me to painting, or rather, repainting. In his article, Mr. Priestly mentions that most Minifigs of the time were likely “favored with a hefty coat of Humbrol Enamel…and then gloss varnished to within an inch of their little metal lives.” Again, I can relate. Here in the States, Testors enamels were the model paints of choice, and I laquered many a miniature in them before “discovering” acrylics right around the time I started playing 40K. Prior to that, every miniature I painted, including many from the sets above, were done with Testors enamels and gloss coat. I shudder to look at them now, but if you’d like to see some before and after shots, look no further than here.

The question then becomes “To strip and repaint, or not to strip and repaint? I am a big advocate of repainting. I’m not the best painter in the world (not even close), but I am exponentially better than I was 35 years ago. I thoroughly enjoyed revisiting the old miniatures I have repainted recently, and I think they are the better for it. But, if even if I were to strip and repaint one miniature every day for the rest of my life, I would likely never finish what I already own, never mind any future tempting purchases. A somewhat sobering and morbid thought, but true nonetheless.

What do you think? Do you get dewey-eyed for a certain manufacturer or era of miniatures? Do you advocate repainting, or are you content with (and perhaps comforted by) viewing your early efforts for what they are?