Just in time for 3 years after the Age of Sigmar destroyed the Warhammer Fantasy universe, I have finally finished my dwarf army. Well, mostly finished. I firmly believe that you can never have enough dwarfs. But for now, I am content.

This was definitely a labor of love. It has been over a decade since I played a game of Warhammer Fantasy, and I have no interest whatsoever in Age of Sigmar. It is unlikely that these stalwart dwarfs will ever see battle, which is a real pity. Nonetheless I did my best to paint them in a manner most glorious, limited only by my shortcomings of  painting skill.

Some of these miniatures and units have appeared before on this blog, back when I was zealous enough to think I could complete a project in a reasonable amount of time. Now that the army as a whole is finished (mostly), I decided to present them once again, this time with the rest of the army. My dwarfs are from several different manufacturers. I have no brand loyalty when it comes to good-looking miniatures, and I don’t play in tournaments where “official” miniatures are required. To that I say most vehemently: “Fuck that shit.”

First up, the Thunder from Down Under(ground), my missile troops! 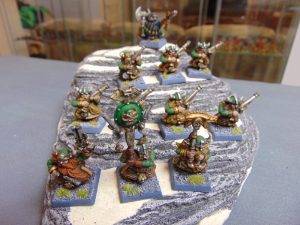 This is the small unit of Thunderers included with the Battle for Skull Pass (BFSP) boxed set. Ten stalwart gunners, led by a Hero (more on him later). I really like these one-piece plastics; even though they’re not poseable, it’s still possible to achieve enough variation with the paint jobs to make them all appear different. 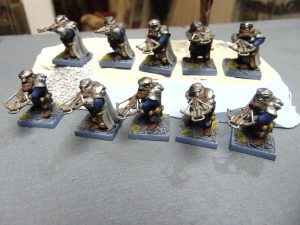 Up next is a group of ten Quarrelers, produced by Mantic. Mantic definitely has a unique look that you either love or hate (I like these guys), but the price can’t be beat. Not as detailed as some of the other manufacturers, but they certainly do the job for rank-and-file troops. These dwarfs could have been build as Ironwatch, which is Mantic’s equivalent of Thunderers, but I chose to give them crossbows rather than rifles because crossbows are cool. 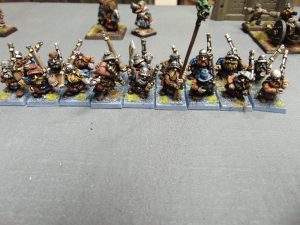 Finally, my favorite unit of missile troops: my Dwarf Gunners, manufactured by Black Tree Designs. Let me be clear: I LOVE BLACK TREE MINIATURES.These guys are all metal, and hearken back to the glory days of GW and Citadel metal miniatures. They have the same “chunky” look to them and the same weight in the hand. They’re priced fairly well, especially since Black Tree seems to have constant 40%-50% off sales going on at any given moment. These guys were a joy to paint, and although 18 is quite a lot of dwarfs for a unit of Thunderers, I really like them! 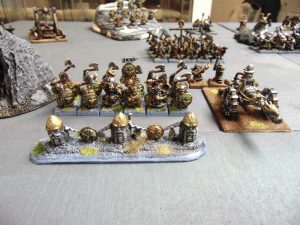 Next up, the foot troops. First is the small unit of Dwarf Warriors from the Battle for Skull Pass set. Ten dwarfs does not a unit make, IMO, but they’re what I had. They’re positioned behind one of the King’s Wall obstacles, also from the BFSP set. I acquired a few more of these dwarf walls over the years.  These warriors are positioned next to a Flame Cannon (more on that later). 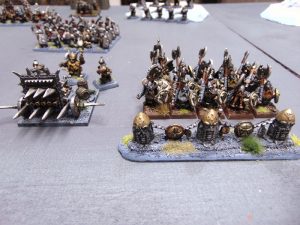 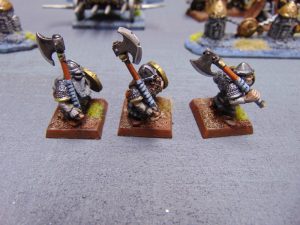 Up next, a group of 16 Dwarf Rangers. These guys are GW plastics, and they lack a command group because I couldn’t find a dwarf command group that looks the same as the unit. I’d still like to get one, though…so if anyone has dwarf plastics from this set that could be made into a command group, contact me and let me know.  Although they are ubiquitous in Fantasy, especially with Dwarfs, I’ve never been a fan of double-bladed axes (they look dumb to me), so I took the liberty of modifying some of axe-heads by removing one of the blades. I like the way it looks much better. They’re standing next to an old -style GW Dwarf Organ Gun (see below). 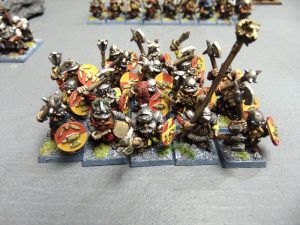 A unit of Black Tree Dwarf Warriors. Now this is more like it! A small unit at 18 models, but a solid enough brick on the table. Red is my least favorite color, and I loathe painting yellow, so why I chose this color scheme I couldn’t really tell you. The standard bearer had a miscast axe, so I just clipped it and replaced it with a Mantic hammer head. 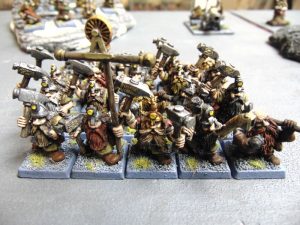 This unit is a unit of Black Tree Miners. Note the shiny headlamps and the hammers. I love the look of these guys, and there’s 20 of them, so it’s a decent sized unit. But I’ve decided to use these guys as warriors rather than miners; I am a big proponent of core troops over special or elite choices, and these guys can serve as warriors just as well… 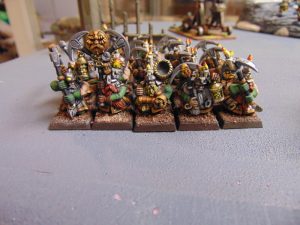 …especially since I already have a unit of Miners. These guys are mix of the GW BFSP miners and a GW miners regiment, for a total of 18. The one-piece BFSP sculpts blend pretty well with the poseable regiment dwarfs. The command group is from the BFSP set, so I was free to make the entire regiment box rank-and-file miners. 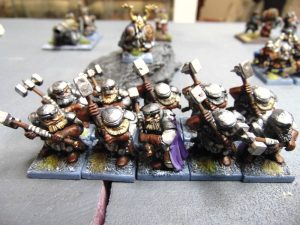 These Mantic Shield-Breakers are proxy Hammerers. Since there’s only 10 of them, I figured I would use them as a bodyguard for my army general. To be blunt, I hate half of these miniatures. The ones that have smooshed-down helmets annoy me, as it can’t possibly be that difficult to cast a miniature headless instead. This would give you the option of adding whichever dwarf head you prefer. Any of them would look better than these lazy, one-piece castings. The other dwarfs actually look pretty cool. And once again, the price can’t be beat (I guess you get what you pay for). This was the most recent unit I painted, completing it just last week, even though I bought it at Gen Con in 2012.

Lastly, my elite unit. These are 20 Black Tree Dwarf Ironclads; in other words, proxy Ironbreakers. I love these guys, and they’re pretty much the best dwarf unit you can field. I once had a unit of Savage Orc Boar Boyz charge a unit of my friend’s Ironbreakers, only to get decimated on the charge and routed. That’s right: my unit of Savage Orcs charged the dwarfs and got their asses kicked so hard they ran away; and somehow I rolled so badly that the dwarfs were able to run faster than my boars and cut the entire unit down like ripe wheat. Oh, the humanity. 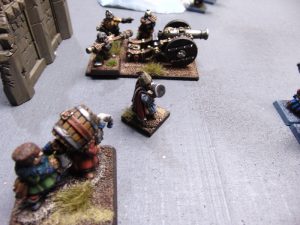 Next up: the artillery! Here is a standard cannon. Note the crew is being kept well-hydrated by the Dwarf Brewmeister and his team. The cannon is a metal GW piece, the beer guys are from Reaper and serve no purpose other than to look cool. 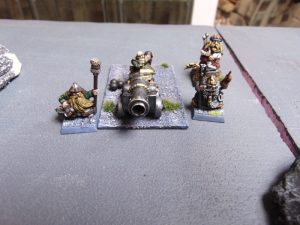 Another cannon, this time the plastic one from the Battle for Skull Pass boxed set. I’m a fan of the models, especially the Dwarf Engineer. Note the Dwarf bagpiper in the background. He’s from Bob Olley’s Dwarf World line, and he’s playing the only instrument loud enough to be heard over cannon fire. Hell yeah! 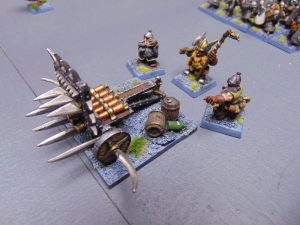 Here is a close-up of the old-style dwarf Organ Gun from Games Workshop. I’m pretty sure I have the wrong crew miniatures for this artillery piece (I think these are technically cannon crew), but they came with the gun and I got the whole kit on the secondary market. I like the newer GW model better. In fact, I like the Mantic version better, too…but the spiky front on this one has some charm. Kind of superfluous, though…I mean, wouldn’t the five loaded guns deter a frontal assault just fine without all the spikes? 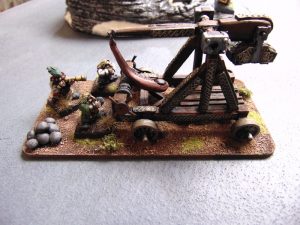 This trebuchet is from Black Tree Design. You may ask: who needs a stone-thrower when you have cannons? Well, I do. My cannons almost always misfire. I have better luck with rocks. And dwarfs are pretty traditional…rocks have been around forever, and if there is one thing dwarfs have no shortage of, it’s rocks. They served well enough in the past…why change things? Rocks are obviously made for hurling at greenskins or those annoying elves. AS IT SHOULD BE!

Here is a shot of the Flame Cannon, also by Black Tree. Sadly, since I will probably never play this army in a game, I will not be able to see the flame cannon in action. Burning things seems like a lot of fun. Like all my Black Tree dwarf models, I love this gun. As a bonus, here’s another look at the Dwarf Warriors from BFSP. 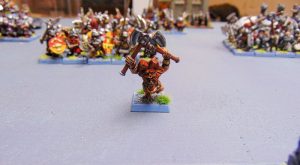 Confession time: Although love dwarfs, I hate Dwarf Slayers. I think they’re stupid. That’s why I will never field a unit of them. Although GW has made them iconic, I refuse to buy into their bullshit. Nonetheless, one of them came with the BFSP boxed set, so I painted him up. There he is. 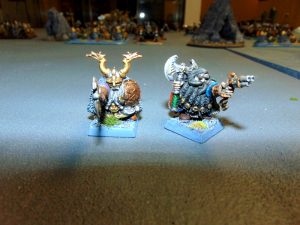 And finally, a closeup of my Lords. The army general on the left came with BFSP. I painted him up a couple of years ago as part of Dwarvember, along with those GW warriors and miners. You can see more pictures of him here. On the right is a GW Dwarf Hero. Since he has a cool pistol,  I placed with my small unit of Thunderers.

As I said, the army is mostly done. Astute viewers may have noticed bare banner poles on some of my standards. That’s because I suck at freehanding banners, but hopefully I’ll get around to it. Also, the Mantic units do not come with command groups (it’s not necessary for their game, Kings of War), and neither do I have a command group for my Rangers. I’d like to get command groups painted for all my units. Perhaps it’s because I played so much Warhammer Fantasy, but units without command groups look incomplete to me, and are therefore irksome.

I’m just glad I completed this project (mostly) after talking about it for so long. The army may be complete, but I still have plenty of dwarfs to paint. Watch this space soon!

2 thoughts on “The Dwarves Are Upon You (again)!”