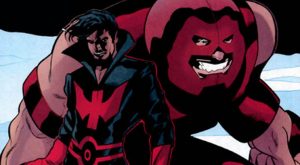 Juggernaut is a classic X-Men villain, a physical titan who is counterpoint to his brother Charles Xavier’s mental mastery. Unfortunately, he often hangs out with Black Tom Cassidy.

Black Tom is the cousin of Sean Cassidy (not to be confused with Shaun Cassidy, the Hardy Boy), better known as the X-Men’s Banshee. Black Tom was created by veteran X-Men scribe Chris Claremont, a man responsible for many great X-Men storylines and characters. Unfortunately, he’s also responsible for many horrible X-Men characters (like Black Tom Cassidy), as well as the nightmare “alternate-reality/timeline” clusterfuck that characterizes the X-books to this day.

I have mixed feelings about Mr. Claremont. On the one hand, his X-Men work with John Byrne in the late 70’s/early 80’s is iconic. But then, in the 90’s, he created Gambit.

No matter how conflicted I feel about Mr. Claremont, my feelings about Black Tom are crystal clear. Like many of Claremont’s characters (Moira Mac Taggart, for example), Black Tom suffers from ridiculous ethnic stereotyping. He’s all “begorrahs” and “boyos” and “blimeys”.  I get that he’s a comic book villain, but fer Chrissakes, man. Black Tom also channels his powers through a shillelagh, because of course he fucking does.

In case you can’t glean as much from the tone of this post, I actually hate Black Tom Cassidy more than I hate Gambit (I didn’t know that was possible). Nevertheless, he hangs out with Juggernaut, so…. 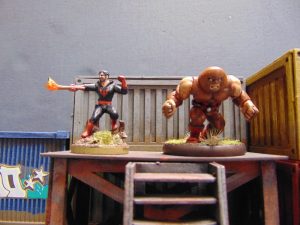 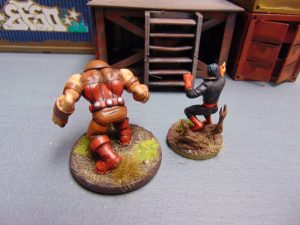 Here are my Heroclix repaints of Juggernaut and Black Tom. I look at these and while I’m happy with the repaints, I have a slight problem…Juggernaut is way too small. According to the Marvel wiki, Juggernaut is 9’5″. The fact that he’s hunched over (no doubt plodding forward) doesn’t help, but I feel like Juggernaut should be HUGE. Take this screen shot from the Marvel Super Heroes video game:

Yeah. That’s Juggernaut. Not someone slightly larger than Black Tom Cassidy. He can fit his whole hand around Iron Man’s waist! (In the video game, he’s actually bigger than the Hulk.) 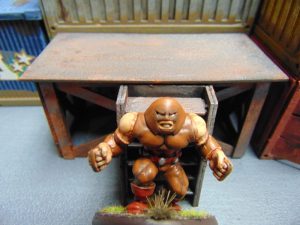 There are other Heroclix versions of Juggernaut, but, IMO, this one is the best sculpt. I wish it was bigger, but I’ll live with it.

As far as Black Tom goes, his sculpt is fine, although the flame coming out of his shillelagh (why does that sound dirty?) is made out of that translucent ‘Clix plastic I hate so much. I painted flames over it, for better or worse.

Here are my Super Mission Force builds for Juggernaut and the reviled Black Tom Cassidy: 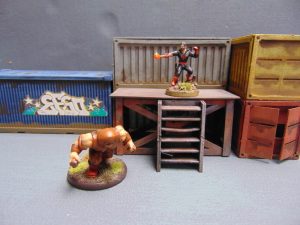 Special Rules: Unstoppable: Juggernaut’s Density Increase power is ALWAYS on. He doesn’t have to activate it, nor can he choose to deactivate it. This makes him immune to knockback at all times. It also means he can’t charge, only move at his normal rate. Juggernaut can be Entangled, but only until his next activation. He automatically wins any opposed roll to escape an Entangle. He just plods forward. Juggernaut can be grappled normally. (If you want try grappling Juggernaut, good luck.)

Note: this is the old version of Black Tom, the one I know and hate from a few decades ago. Apparently, Black Tom is now part wood, and can control wood. If you prefer, I guess you could give him Armor and Melee Specialist instead of the minor powers I gave him to reflect his current version. He’ll still suck, though, because he’s still Black Tom Cassidy.

5 thoughts on “Juggernaut and Black Tom”