To finish off Monster Month, I present a  monster miniature that is finally seeing paint after almost THIRTY YEARS in my “to-do pile”! 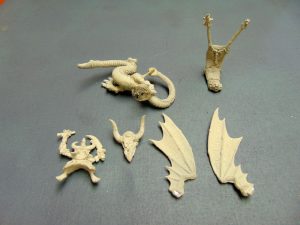 It’s an old Warhammer Orc Shaman on War Wyvern, circa 1990 or thereabouts. I got him on the secondary market sometime in the mid-nineties. Originally, he was to be for use with my Warhammer Fantasy Orc & Goblin Army, but I wanted to use the wyvern as a mount for an army general, Varg Bonebreaka,  rather than a shaman (more on this later). Before I could do more than buy the bitz and start the conversion, though, several things happened.

Eventually, around 2003 or thereabouts, I ceased playing Warhammer and Warhammer 40K altogether. This miniature, along with all my others, languished in storage until around 2010 or so, when I started painting miniatures again.

The mounted shaman miniature is perfectly acceptable, in a “I’m holding two weapons parallel to my body within my frontal plane” kind of way (typical of GW of the time). He just wasn’t all that exciting. For my general, Varg,  I decided to use the original Morglum Necksnapper model as the base of the conversion.  You can see in the picture below how the original model looked way back when. I intended to mount the shaman on Morglum’s boar, since he wouldn’t be using it. I still haven’t got around to that yet, either.

I purchased all the bitz I needed for the conversion from a GW rep who came by my FLGS in the “Bitz Wagon”. I bought a dwarf casualty for the base, as my Orcs & Goblins often faced off against my friend’s Dwarfs. (Yes, I wanted to irritate him.) I got rid of Morglum’s axes, as I hated how they looked, and replaced one with a double-edged Chaos axe. I decided I was going to give him a long spear in his other hand, as he would be pretty high up on that wyvern and wouldn’t be able to reach his opponents with anything else. For that, I used a lance from an old Skeleton Horsemen box. Finally, I ditched Morglum’s banner poles and replaced them with the back banner from an old Skaven model, Queek Head-Taker.

Then I let him sit there in the Insanity Pile, untouched, for almost 30 years. When Monster Month rolled around, he wasn’t hard to find. 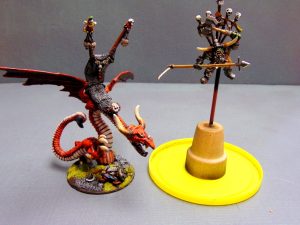 Here are the results. Because of the large amount of conversion on the orc, I needed to paint them separately prior to assembly. This is actually the first time I mounted a model on something to handle it while painting (I usually just hold it between my fingers). The wooden “plant pot” was intended to provide some stability, but it didn’t do much as the model kept falling over whenever I accidentally hit it (which was often). After the third time fixing the spear, I got wise and glued it to this coffee can lid for added stability. 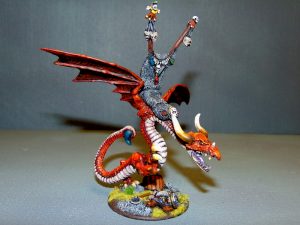 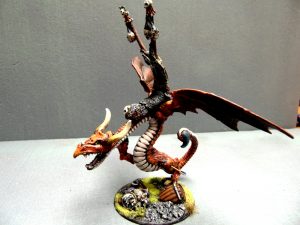 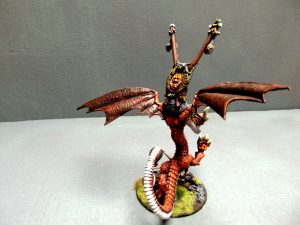 I don’t go in for the double banners on the wyvern’s back, because I think it looks stupid. Also, I suck at making banners. I opted to add some severed heads from an old GW zombie sprue instead. 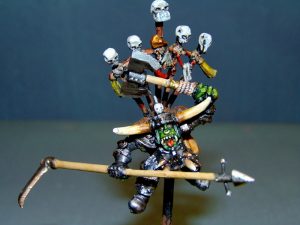 I couldn’t find the “back end” of the lance pole. It disappeared some time in the last 25+ years or so. Instead I used a piece of plastic rod. I thought it looked kind of boring, so I added this scythe blade from a GW zombie sprue to the end, turning it into a nasty, unique-looking pole-arm. 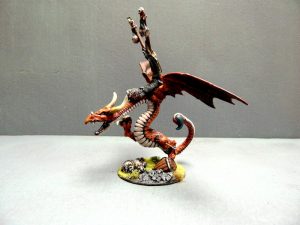 I drilled a couple of holes in the wyvern’s flank and added some arrows. Monsters, and the generals on them, tend to attract missile fire. 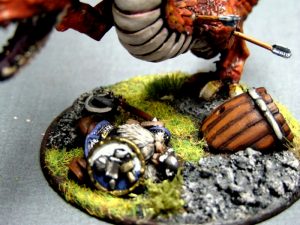 My friend’s Dwarfs, IIRC, were painted in a green color scheme. I decided to paint this dwarf blue to make him really stand out against the grass and under the wyvern’s claw. The broken barrel is from an Army Painter basing kit. 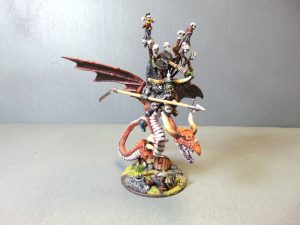 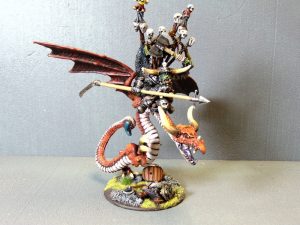 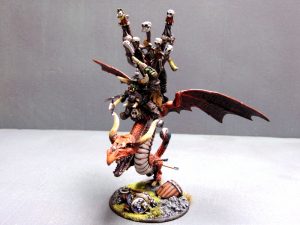 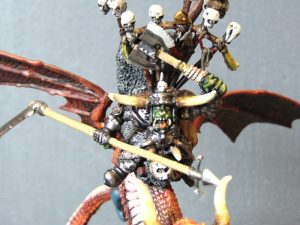 At last, some final pictures of the complete wyvern with the rider. I give you Varg Bonebreaka, a name inscribed forever in the Book of Grudges many times over! WAAAAAAAAAAAGH!!!!!!!!

This model took me longer than I thought to complete, so I’m glad I started when I did. Unfortunately, I still have a few monsters that aren’t quite finished, and the end of Monster Month is nigh! Oh well. Perhaps I will finish them up soon, and post them as an intermission during next month’s Forgotten Heroes challenge!