For my third group of miniatures for Dungeon Saga: the Dwarf King’s Quest, I decided to focus on the dwarfs. 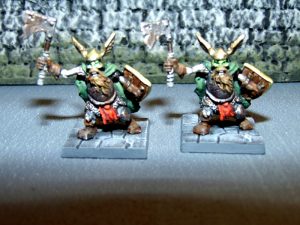 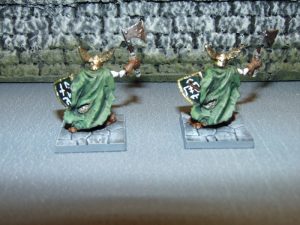 There are two dwarf revenants in the game, basically undead dwarf warriors who serve their undead Dwarf King, for whom the game is named. I decided they would likely be clad in similar raiment, as they are soldiers, after all. I opted for green. 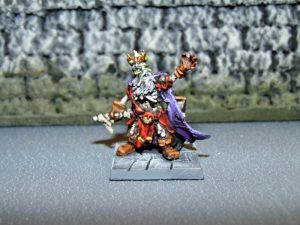 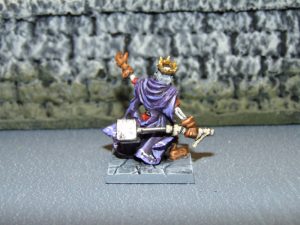 Then there is the eponymous undead Dwarf King himself, Grund (not a very dwarflike name, but whatever). I’m pretty happy with the way he turned out. I really like the miniature, too; much like beards, big blocky hammers just seem to go with dwarfs. 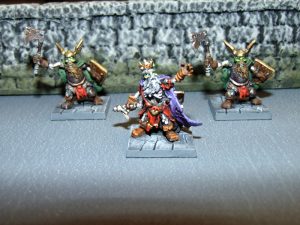 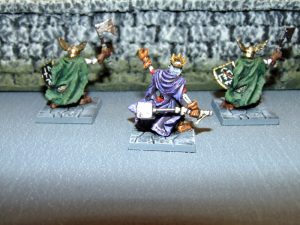 Here’s a shot of the king and his soldiers. Speaking of beards, I think it’s great that dwarfs keep theirs even after death, when the rest of their face is just a skull. It’s also worth noting that only after death would a dwarf EVER tolerate rust on his weapons or armor. 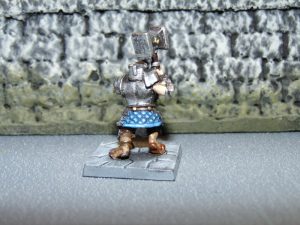 Finally, I completed my first Dungeon Saga hero: Rordin, the Dwarf. I don’t have a problem with the miniature per se, but it’s not that exciting a pose. Also, his hammer head is bent, and even though I tried to straighten it about 6 times, it went right back to the bent position. Annoying, but not really the end of the world, considering how much I’m likely to actually play this game.

Up next: (undead, not Russian) Trolls! I’m hoping to get them done by the end of the month, which will leave only the remaining 3 heroes and the dungeon scenery left to paint. Wish me luck!