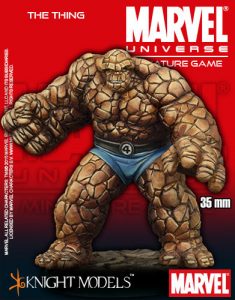 Therefore, ladies and gentlemen, I ask you again: What time is it?

I think we all know what Mr. Grimm would say.

Knight Models is a Spanish company that makes those terrific (and hugely overpriced) miniatures for the Batman Miniatures Game. (I splurged and bought a Killer Croc, because I really liked it.) For a brief time, they had the license to produce Marvel miniatures, too. I very much covet their Hulk model, and I would love to get one. But man, are they pricey on the secondary market! Most eBay listings for the KM Hulk start at around $75. That’s a shitload more than I want to pay for ANY miniature. (I don’t pony up that kind of cash to GW; I’m not about to give it to someone else, either.)

This miniature of Thing was listed on eBay for $25 with free shipping. It was mint in the box. I bought it. I’m glad I did. 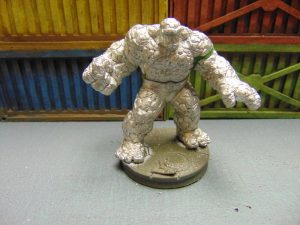 First off, he’s huge. At 75mm, he’s way bigger than a Heroclix Thing. (I find the Heroclix “big guys” to be kind of small, but YMMV.) More on that below. 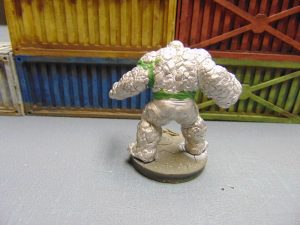 He’s a three-piece casting: the legs, body and left arm. The miniature required some filing and filling with green stuff to fit together properly. Not a big deal, but it was an essential step. I primed him black. 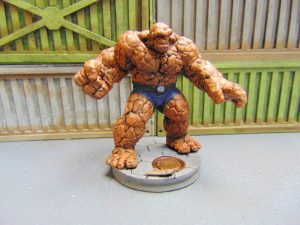 I based him on a 40mm Micro Arts Studio urban base and gave him his first basecoat: Citadel Ratskin Flesh for the orange rocky skin, and P3 Exile Blue for his speedo. 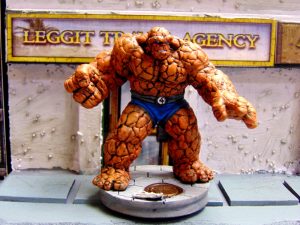 Here he is completed. I highlighted  his skin with Citadel Macharius Orange and a drybrush of Fire Dragon Bright, before giving the cracks a wash of Army Painter Strong Tone. His trunks were highlighted with Vallejo Prussian Blue and Reaper Dragon Blue. 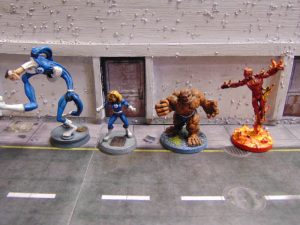 Here’s the Fantastic Four from the early Clobberin’ Time Heroclix set. As you can see, Thing doesn’t look too bad. 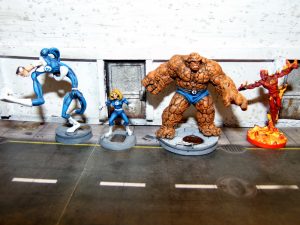 But HERE is the Knight Models Thing with the rest of the Heroclix FF. Much better, don’t you think?

I plan on using the Knight Models Thing in any supers game where his large size doesn’t obviously conflict with other models of similar scale; in other words, I wouldn’t use this KM Thing in the same game I use a Heroclix Hulk (that would just be dumb) Instead I’ll use the ‘clix Thing for that.

There are presently two Knight Models miniatures I desperately want to acquire: the Hulk and Solomon Grundy, both seemingly impossible to find for sale at a reasonable price any longer.