I need to stay off eBay.

And then, last month, I bought the Knight Models Thing. I mean, you can’t blame me. It’s an awesome miniature and I got a great deal on him. I painted him right away. It’s not like he was languishing long in the insanity pile.  And I WILL use him in a game soon.

I thought it was a momentary lapse. But then, I saw this. And I bought it. 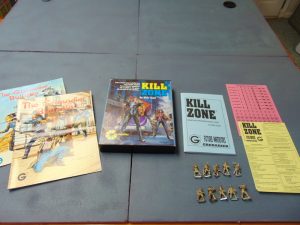 This is a Grenadier boxed set, circa 1994, that contains a full-blown game and “Future Warriors” miniatures sculpted by Nick Lund. It’s basically cops vs. gangers in the future, very Judge Dredd-ish.

I thought I was pretty familiar with all things Grenadier, but this one caught me by surprise. I’m a big fan of Grenadier and of Nick Lund, but I never saw this before. I never knew it existed. I’m not sure if this came out over here in the States or if it was only a European release.

It’s pretty much mint. The miniatures have never seen paint. In addition to them, it includes the rules, reference card, tokens and even dice. It even has a mail-in card for a subscription to the Grenadier Bulletin, as well as two copies of the  Bulletin, which seems to contain miniature previews, painting tips and scenarios for the Fantasy and Future Warriors lines. Cool!!