Between some small projects of my own and my participation in Zombtober this month, I’ve managed to finish up all the miniatures from Dungeon Saga: The Dwarf King’s Quest. (Of course, I still have all the dungeon furniture and doors to do, but those can be done here and there as time permits. The main thing is all the miniatures are officially done!)

There are four heroes in Dungeon Saga: Orlaf, the Barbarian; Madriga, the Elf; Rordin, the Dwarf; and Danor, the Wizard. I painted Rordin already when I painted the undead Dwarf King and his Revenants, so that only left the other three. 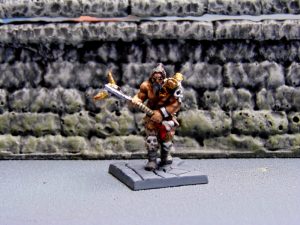 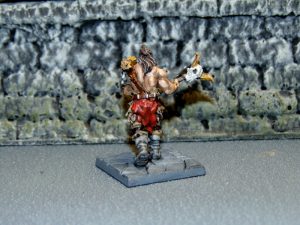 Here is Orlaf. I really didn’t like this miniature much until I painted it. For whatever reason, I just wasn’t impressed with the sculpt or the overall character concept. Now he’s grown on me somewhat. I painted him close to the “official” look, with only minor differences. 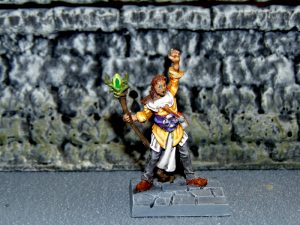 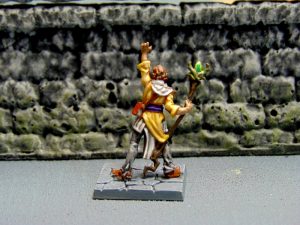 Next is Danor. I completely scrapped the “official” paint scheme for this model, as I hate the way it looks. This is the only model in the entire set that I primed grey, as I knew early on I was going to paint him predominantly yellow. I based him with Citadel Tau Light Ochre, then highlighted with Averland Sunset, Yriel Yellow and finally, Mold (a light yellow from Reaper). I was going for a similar yellow/white color scheme to Merlin, the wizard from the Gauntlet video game of my youth. At the very end I decided to paint his belt purple for some contrast. 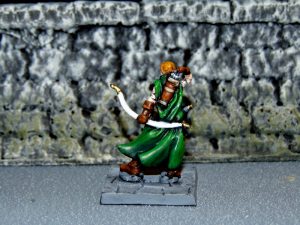 Last, we have Madriga. I considered painting her completely different from the classic “elf ranger with a bow” green and brown. I was toying with painting her cloak a deep orange and going for an autumn color scheme, but I said screw it and just painted her as you see here. I wanted this project to be over. 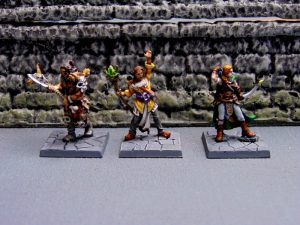 Here’s a shot of all three. 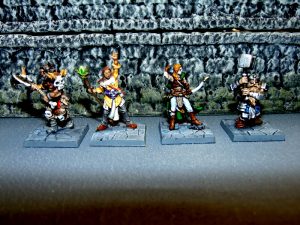 And here’s a shot of the three plus Rordin, the Dwarf.

Onto other things. I need to get my first Zombtober stuff ready to post this weekend, as I’m already a week behind!