The zombies activate! We rolled 11 dice in the dice grave, scoring 7 zombies. They spawned at random points all over the board. None spawned close enough to Mr. Wisdom or his girls to threaten them this turn, and Honey Velvet and her group were far enough away from any spawning points that they only had to worry about the zombie that was still trying to eat B-Train this turn. 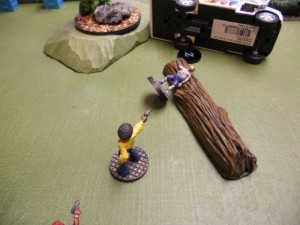 Feel the Fist of Funk!

A zombie spawned right next to Spartacus Jones and since he was within 6″, he charged right into Monstrous Melee! Spartacus could have Snap-fired at the charging zombie, but why bother? Instead he showed that dirty rotter what it means to meet the Fist of Funk! Ka-POW! One zombie down.

Meanwhile, the zombie on the truck with B-Train failed to do any damage, and so did B-Train. They remained in combat.

The Survivors won the activation next turn. Mr. Wisdom managed to get into base contact with a zombie spawn point and destroy it, which made his section of the board just a little bit safer.

Ramses Magnum fired at an approaching zombie not too far away, but failed to kill it. Lorenzo leveled his shotgun at the zombie and blew it into next week!  Honey Velvet joined the melee between B-Train and the zombie in the truck. With her machete, she made quick work of the zombie before he could sink his yellow, decayed teeth into B-Train.

Spartacus Jones was still trying to rally his group, considering Foxxy Dynamite was still suppressed. Not willing to move on without her, he consolidated the troops and waited it out this turn.

The zombies spawned at an alarming rate, due mostly to the sound of gunfire from Honey Velvet’s group. We rolled a whopping 17 dice for the dice grave and scored 12 zombies. That was enough to hit all remaining spawn points once, and one twice! It was beginning to get crowded…

To make matters worse, the zombies won the activation for the fourth round, which means they spawned AGAIN. Luckily, there were only 6 this time, but it didn’t help any, as there were now enough zombies on the board that they started to herd together. Many of them began to close on the park, where Spartacus Jones and his group had been stuck for the last two turns. 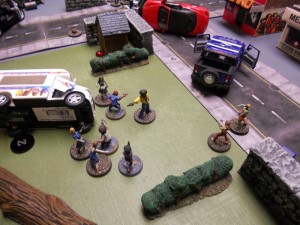 Both De’Andre and Cyrus Snap-fired on the approaching zombies, but didn’t do anything to slow them down, and they wound up in Monstrous Melee. Foxxy Dynamite finally came out of her stupor and shot one of them down. Spartacus fired his gun but missed. That’s a LOT of gunfire.

Mr. Wisdom got charged by a zombie, but made quick work of it with his sword-cane. 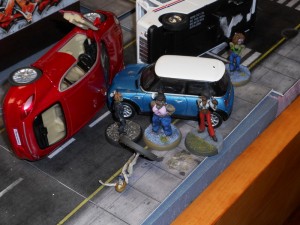 On the survivor’s activation, Mr. Wisdom got close to another zombie spawning point, and took that one out of play too.  His area was rapidly becoming the safest part of the board, as zombies weren’t moving towards him at all, really. All the spawning points left were closer to the other groups. However, just to be safe, Mo’nique and Lady Chardonnay moved around a car wreck to confront two shambling zombies. Mo’nique put one down permanently with her purse, while on the other side, Yu’nique made it to a car and looted it, finding 2 units of Food!!

Honey Velvet’s group began to move around the Gun Shop, staying away from the front as more zombies were heading there all the time. Ramses Magnum kicked open a nearby door to a SURVIVE! Location, and once inside, opened a fridge only to find it filled with disgusting zombie guts, which promptly coated his expensive, polyester powder-blue suit in gore! This had the unfortunate effect of raising the Zombie Threat Level by one for the rest of the game, ensuring that more and more zombies would be attracted each turn!

The zombies activated first AGAIN the next turn. Based on the amount of gunfire the previous turn, as well as the heightened threat level, we were rolling a truly horrendous amount of dice to spawn zombies. They seemed to come from everywhere at once! Poor B-Train lagged a little too far behind Honey Velvet’s group and wound up in Monstrous Melee as a zombie lunged at him. He was pulled down and eaten before our eyes! Honey Velvet could do nothing for him and turned her head away. Ramses Magnum, being Dead Inside, was calmly indifferent to the whole scene. It gave them some breathing room as all nearby zombies would be attracted to the feast next turn.

But poor B-Train wouldn’t be the only one to become zombie chow this turn. In the park, both Cyrus and De’andre were pulled down and noshed on by zombies while Spartacus Jones and Foxxy Dynamite could only watch helplessly. Both passed their GUTS checks, so they could act freely when their time came. 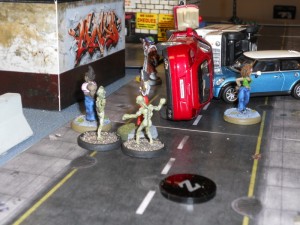 Zombies charged at Mo’nique and Lady Chardonnay. Lady Chardonnay put one down with Snap-fire, while Mo’nique bludgeoned yet another zombie into final rest with her purse.

On the survivor’s activation, Mr. Wisdom moved to join his group, taking a shot at a zombie at long range and missing, while Yu’nique looted a nearby dumpster and scored a Big-Ass Knife! 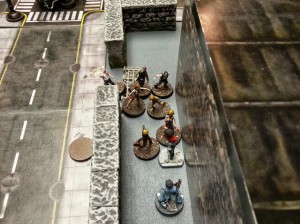 Meanwhile, Honey Velvet’s group continued around the Gun Shop, only to find a hastily-erected barricade collapsing under the weight of half a dozen zeds. They would have to fight their way through next turn! 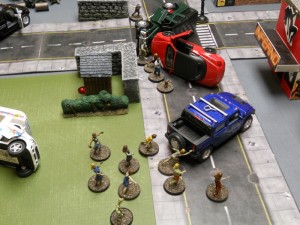 Let's get the FUNK out of here!

Spartacus and Foxxy ran into a nearby Hummer and locked the doors as the groaning zombies outside mobbed up and gave pursuit. He couldn’t get it started this turn, and would have to wait. Meanwhile, the zombies were getting closer, and a car door isn’t much protection…

2 thoughts on “The Soul Survivors: A No More Room in Hell AAR Part 2”