Since I bought .45 Adventure 2nd Edition, I’ve been itching to run some Pulp games with the new rules. In accordance with my new play style, I thought a miniatures campaign over the course of several weeks would be a good way to introduce all my friends to .45 Adventure while not necessarily needing to have them all present at once. It’s easy to jump into an episodic pulp game at any point, as each scenario doesn’t require much of a backstory. 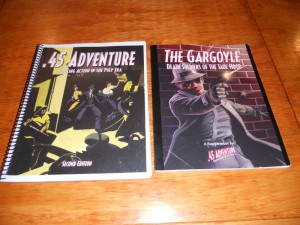 With that in mind I decided to run Death Soldiers of the Jade Hood, the published campaign for .45 Adventure 1st Edition. It will take a bit of fiddling to get it to run smoothly in the new edition, but I don’t think it’s beyond my abilities. I will give a brief synopsis of each scenario (including special rules), the full After Action Report, and any major differences between 1st and 2nd Edition that I encounter along the way.

The basic plot of the campaign is as follows: The nefarious Jade Hood, criminal mastermind of the city of New Commerce, has hatched a diabolical scheme to turn ordinary, unsuspecting citizens into bloodthirsty maniacs. He hopes to use his mind-controlled army to take over the city once and for all. Standing in his way is Ace Reporter Bridget Rourke, her faithful friend and ex-prizefighter Mo Shrevnitz, and the enigmatic vigilante of New Commerce…the Gargoyle!

The board is set up as shown above. It’s a warehouse district at night, which limits visibility to 12″. Four streetlamps shed light in a 3″ radius. In the middle of the board is a white truck. The bad guys are loading the truck with crates (represented by the tokens) of chemicals that the Jade Hood needs to make his Death Soldier formula. Bridget Rourke has to get behind the truck and snap a photo of the crates being loaded, then get off the board with her evidence. The bad guys need to stop her or at least prevent her from snapping a picture and get away with the crates. My buddy Matt decided to play the heroes, leaving me with the bad guys. He started with Bridget Rourke (placing her on the left table edge, above). Mo started off the board until his encounter card was drawn. I started with 2 Grade 1 Brunos (Flanagan and Baldy), and 4 Grade 1/2 Mooks. I put two of the Mooks on guard duty and armed them with pistols. The other two Mooks were armed with a knife and club, respectively, and they were loading the truck.

A couple of turns into the game, the Mooks have successfully loaded the truck with a few crates. Bridget has managed to avoid being spotted thus far, but she can’t get anywhere near the truck without being seen. A deck of cards is used to simulate random events, such as Mo arriving, random guard movement, and an opportunity to snap a picture.  I was a little unclear as to whether or not we should shuffle drawn cards back into the deck, but I decided to reshuffle as there were ten cards and only two chances to take a picture. (What if we drew the picture cards early? Does that mean there’s no chance for the heroes to win?) 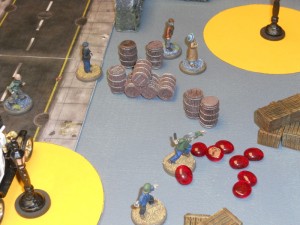 A few turns later, Bridget is spotted. She sprints across the street, trying to avoid the bad guys. Flanagan, Baldy and one of the Mook guards are in hot pursuit. The Mook fires his pistol at her, but it jams. Flanagan gets close but can’t tackle her this turn. The other Mooks continue to load the truck.

Suddenly, Mo arrives just in the nick of time! He sees his friend Bridget is in trouble and rushes in, meaty fists swinging! 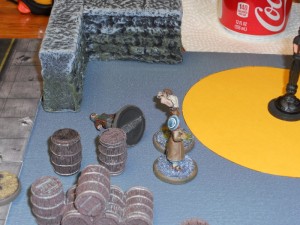 On his activation next turn, Mo charges into combat. Now, here’s how 2nd Edition really differs from 1st: combat runs much more smoothly. Most models roll one die and add their Shiv score, keeping the result. Mo, however, is an ex-prize fighter, and he knows how to land a few punches. He has One-Two Punch and two levels of Brawler, which means he rolls four dice and keeps two. Plus, he charged into combat, so he gets to roll an additional die, bring his total to five dice, keeping 2 results. Yeah, Mo is pretty tough.

Being Grade 1, Flanagan only has one wound. So, Flanagan pretty much craps out his bones and keels over. 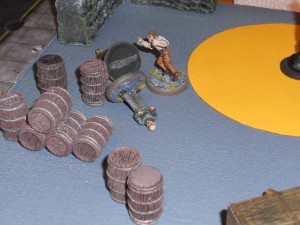 The next turn, Bridget runs away, still trying to get to the back of the truck. At this point, I pretty much gave up with the random event draw, as most of the results weren’t making sense. (The guards had been roused already and were pursuing Bridget, so it wouldn’t make too much sense that they would suddenly get the urge for a smoke and randomly move off.) On his activation, Baldy charged Mo and tried to rough him up, but Mo wasn’t having any of it. Predictably, he floored Baldy with little effort. 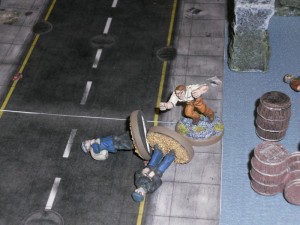 A couple of turns later, the pistol-armed Mooks ganged up and fired on Mo, but failed to hit him. Mo closed the gap, and using his Sweep ability, knocked both of them into next week with one punch!

Meanwhile, Bridget moved closer to the truck’s rear end. Since we were no longer using the random deck, I ruled that if she could get into contact with the back of the truck, she could attempt to take a picture. The Mooks loading the truck finally decided to drop their crates and get involved. They moved towards Bridget with murderous intent, seeking to silence the nosy broad once and for all!

Bridget popped the flash on her camera, taking a picture of the incriminating chemicals and blinding the Mooks in the process. Despite having their Shiv score reduced to 1, the knife-wielding Mook managed to land a vicious hit on the Ace Reporter, and would have gutted her like a mackerel! But Bridget Rourke didn’t live so long covering crime in New Commerce without being Lucky. Matt spent two Hero points and Bridget managed to miraculously avoid the blow altogether.  Now, however, she was locked in hand-to-hand combat with two armed Mooks, and while Mo was on his way, he wasn’t there yet…

Next round, Mo ran to help his friend Bridget. Bridget couldn’t leave combat without taking some free hits from her assailants, so she craftily raised her camera again and ignited the flash, once again blinding the Mooks…and Mo. 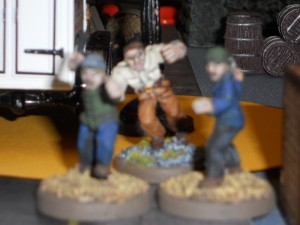 Later, Bridget’s blurry picture was developed. It showed the last few seconds of consciousness for the two Mooks, and incidentally fulfilled a bonus victory condition: she got a picture of combat taking place! 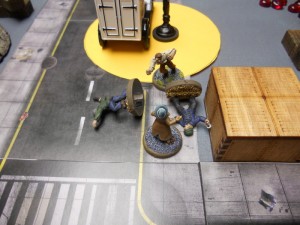 When their eyes cleared, Mo was locked in combat with the two Mooks. Another Sweep, and another two unconscious Mooks. Bridget and Mo were able to exit the board with proof of the Jade Hood’s chemical designs and the fight. A clear victory for the heroes! That’s a wrap, boys!

There were a couple of rules differences I noticed between 1st and 2nd Edition. In 1st, Night limits visibility to 6″, whereas in 2nd, it’s 12″. This vastly increased the Spot distance for the guards. In the published scenario, spotting was handled with another deck, giving a 50% chance to not spot, a 25% chance to attempt to spot with a penalty, and a 25% chance to attempt to spot with no penalty. It doesn’t detail the penalty or what happens when the enemy is spotted, so I just threw out this whole mechanic and ruled that once a model was spotted, every model on the board was aware of it.

Also, once a model is spotted, it can’t ever hide again unless it has a special ability allowing it to do so. Bridget didn’t have any such ability, so once she was seen she was effectively screwed until Mo arrived.

Speaking of Mo, he clearly outclassed everyone on the table in combat. In the last edition’s combat system, Mo was nowhere near as tough. The new system really makes a difference.

Lastly, there are no Grade 1/2 models in 2nd Edition. Basically, they made Grade 1 models much weaker and did away with Grade 1/2 models altogether. If I was playing 1st edition 45 Adventure, this would have been a bit more of a challenge for Mo and Bridget, as the bad guys would have been able to stand up to Mo a bit longer.  I played the next scenario the same way (coming soon) and it was even more one-sided. From now on, when converting from 1st to 2nd edition when I see Grade 1/2 models, I’ll make them Grade 1; and when I see Grade 1 models, I will make them Grade 2. That way it won’t be as much of a cakewalk for the heroes.

Stay tuned for the next thrilling episode, coming soon!