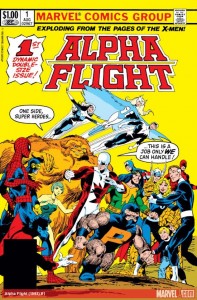 Don’t ask me why I did this. For those who don’t know, Alpha Flight is the first all-Canadian superhero team, created by John Byrne (a  Canadian) in 1979. Byrne is legendary for his artwork on X-Men and Superman, among too many other credits to name.

Alpha Flight made their debut in X-Men #120, and soon had their own book. The thing is, Alpha Flight kinda sucks. I mean, to call them second-raters is an understatement. To call them third-stringers is still a kindness.

Still, I thought I’d have some fun and repaint and rebase some Heroclix for Supersystem. So here they are. 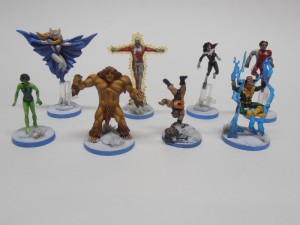 Despite being a  really lame team (and that’s being kind), most of the Clix sculpts are pretty good. To me, Shaman, Snowbird and Puck really stand out. Shaman required the least in the way of repainting; he actually had a pretty good paint job right out of the box. The others, however, required a bit more effort to make them look good.

Now I have to find something for them to fight.