I just got a brand new mat from Cigar Box Battle Mats, and I love it. To celebrate, I thought I’d photograph my old Warhammer Fantasy Orcs and Goblins on it. I haven’t played a game of Warhammer Fantasy since about 2003, so it’s been a while since these miniatures have seen battle. I’ve been using a few here and there for RPGs and skirmishes, but that’s about it.

The WAAAAAAGH is too big for me to photograph all at once, so I just took pictures of the individual units. This was my main WFB army from 1995 or so until about 2003. Previously I played Undead, but when GW split them into two different army books I never really went back. I was on a pretty limited gaming budget back then and couldn’t afford it.

Most of these miniatures were picked up in trades on Bartertown or in the boxed sets. The paint jobs aren’t terrible, but neither are they as good as they would be if I was painting them today. I tried to do a decent job as fast as possible so I could field them quickly. (I didn’t play with unpainted miniatures then, and I still don’t now.)

First up, two units of archers. Night Goblins on the left, Orcs on the right. The Goblins came from the 4th edition boxed set. My friend bought the set for $60 bucks. It included Goblins and High Elves. He took the Elves and the rules sold me the goblins for $20. A good deal then and would still be now. The Orcs were old style Arrer Boyz, mostly plastic but a couple of metal ones too. This was the era when core troops were pretty much all the same sculpt with no variation. The armies today look better, but say what you will about the old style: at least they ranked up with no problems. Out in front are three Night Goblin Fanatics, as well as the old version of Skarsnik and Gobbla. In the back is the old Orc Rock Lobba. 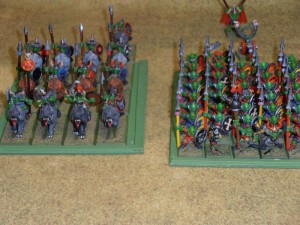 Moving onwards, here’s a unit of Goblin Wolf Riders and my main unit of Goblin spearmen (also from the 4th edition boxed set). Way in the back you can see an old-school Doom Diver Catapult.

Next we come to my main core units of Boyz. On the left is a big brick of Orc Boyz from the 5th Edition boxed set. I forget who sold me these, but it was someone who was only interested in playing Empire. In the middle is my elite unit of Black Orcs (the old-school sculpts). This unit is one of the only ones I paid full retail for. On the right is another unit of Orc Boyz. These are mostly old Heroscape Orcs I picked up in trades. Once I had an opponent in a local tournament object to me using them, because, technically, they weren’t “purely GW miniatures”.  I took the unit out of my army and still trounced him. Then I told him to fuck off. Also in the picture is one of my Orc Bolt Throwers (which are now apparently crewed by Goblins in the newest version of the rules). More on the characters in front later. 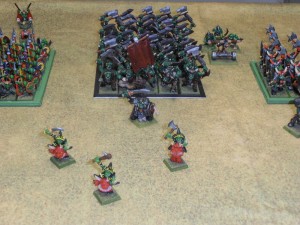 A better shot of the 5th Edition Boyz. In front are three Goblin Squig Hoppers. I loved the absolute randomness and fun of playing goblins. The Fanatics, the Doom Divers and the Squig Hoppers…none of them ever worked how you wanted them to, but they were just too fun not to include in the army. I don’t think any of the Hoppers ever killed anything. They always got shot before they could even make contact with an enemy.

These guys won many a battle for me. Back in 4th-5th Edition, Savage Orc Boar Boyz were insane unit killers. I had 12 armed with spears and could usually break any unit on the charge (except for Dwarf Ironbreakers…Ooooo, how I hated them). Next to them is another Bolt Thrower, another unit of Orc Arrer Boyz (also from the 5th Edition boxed set) and another Doom Diver Catapult. 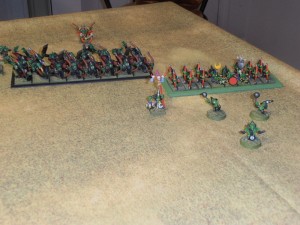 Lastly, here’s another shot of the Orc Arrer Boyz. To the right is another Night Goblin archer unit (from the 4th edition Boxed set), a Night Goblin shaman, and a few more Fanatics. 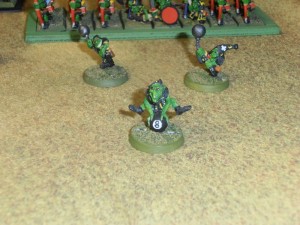 My Night Goblin archers couldn’t hit the ground if they aimed at it, but that’s not why I played two units of them. I did it for the Fanatics. I would always equip one of them with a Madcap Mushroom. That would be the guy riding the 8 Ball. 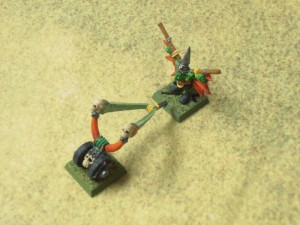 A close up of one of the Doom Diver Catapults. The new model is pretty cool, but it’s also three times as big. I like the old one better. 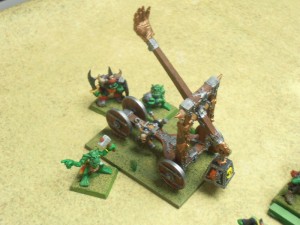 The old-school Rock Lobber. I was supposed to have two of these, but I got burned in a trade on Bartertown. I will always remember the name and email address of the asshole who screwed me. He lives in Healdsburg, California. So, Ben, if you’re reading this, go fuck yourself. 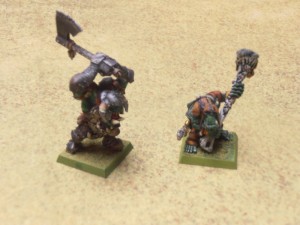 A couple of character models. On the left was my Warboss. He was an exclusive Games Day miniature that my friend picked up for me. On the right is Nazgob, the Orc Shaman. He was a new miniature when I bought him. GW still makes him today. He was originally wearing bright blue, but I recently repainted him and he looks much better. 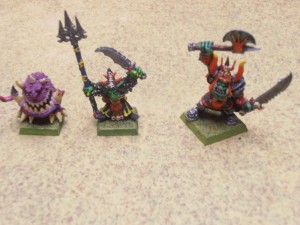 Skarsnik and Gobbla, a very fun (but not very effective) Night Goblin team. I don’t think I ever won any battles with Skarsnik as my general;, but it was always fun to see which of my own troops Gobbla would eat. On the right is my old Warboss before I got the Games Day miniature.

Last but not least, Gorfang Rotgut. I added some bitz from the zombie boxed set and added a shield to his shield. It was one of my first conversions. I once played a campaign against my friend using Gorfang as my army commander. My friend played Dwarfs. I got crushed. No sour grapes here, I still had a blast. But I realized that Gorfang was one of the most overpriced (points-wise) and ineffective special characters in the game.I chose him because he had a hatred of Dwarfs (believe me the Dwarfs felt the same way), but that didn’t help. In the end, my Orcs got curb-stomped by the Dwarfs. I think I won one out of eight battles.

I picked up a Battle for Skull Pass boxed set about two years ago, mainly for the Dwarfs. (I’ve always loved Dwarfs, and my friend kicking my ass with them did nothing to diminish that.) I considered painting up the Spider Riders and adding them to the WAAAAGH, but decided against it. I also thought about buying the Arachnarok Spider, but again, decided not to, even though it’s a really cool model. After all, I never play Warhammer anymore. I’d like to, but I’m not about to try to keep current with whatever version of WFB GW  is hawking, or whatever new units they come up with to replace units they arbitrarily deem obsolete.

Grom the Paunch didn’t make it to the table here because his chariot broke and is awaiting repair. Not that it matters. I never won a game with Grom as my general (Goblin generals suck), and, come to think of it, I never won a game with anyone in a chariot as my general. Chariots are huge targets for war machine and missile fire, and whenever I fielded Grom he got shot to death by turn 3, or his wolves got shot and effectively stranded him wherever they died.

More Armies of Yesteryear to come!