One of my 2019 Resolutions was to finally play GW’s Legends of the Old West, an out-of-print Old West skirmish game using the Warhammer engine. Despite using a variation of the IGO/UGO mechanic, it remains pretty popular among Old West gamers, as it’s easy to pick up and play, particularly if you’re familiar with Warhammer.

I’ve been wanting to play some Old West skirmish for years now, and even started making a Mexican border town, Mescalero, several years ago. Like many projects of mine, this got sidelined in favor of whatever else struck my fancy; but not before I also bought, assembled and painted some Plastcraft Western Buildings. I now have the beginnings of two towns; a traditional Mexican adobe village and a clapboard boom-town. (I also meant to make some Badlands scenery (and I still will), but, you know…sidelined.)

Recently I managed to get my hands on the holy grail of 28mm Western gaming, the OOP 1/64 scale ERTL Cow Town playset. It contains a Hotel/Saloon, a Sherriff’s Office, a Blacksmith, and an outbuilding and outhouse, along with lots of other scenic knick-knacks (like bar tables and desks). Between the Cow Town set, the Plastcraft buildings, and a couple of MDF buildings I bought from Knuckleduster, I have no excuse not to move forward with this project.

For Old West miniatures, I have a mixture from Blue Moon, Old Glory, Foundry, Knuckleduster and Reaper. Before the whole thing got sidelined, I painted up the Blue Moon cowboys that I got from Scale Creep. I really like this line a lot. The Old Glory and Foundry stuff looks a little small compared to the others (especially the Reaper Chronoscope stuff), but I’m hoping it won’t bother me too much when I actually start playing.

First up, the Blue Moon miniatures. The Earp brothers: Wyatt, Virgil and Morgan, along with Doc Holliday.

Frank and Billy McClaury; Billy the Kid and Pat Garrett.

A few Reaper Chronoscope miniatures: Stone (who I think is an undead gunslinger, although I didn’t paint him that way); Deadeye Slim; and a U.S. Agent (not to be confused with the guy who replaced Captain America). Both Stone and Slim are Bones miniatures. I bought the Agent because he has a pepperbox pistol, and that’s kinda cool.

Same can be said for the blacksmith (what moron parked a wagon full of hay near the forge?!)…

And this RAFM Call of Cthulhu doctor.

None of these miniatures count towards my painting queue progress, sadly; most were painted years ago. But THIS is my big project for this year; in lieu of starting a new army, I’ll get my Old West scenery and miniatures all done instead.

In between other stuff, of course…

Production of my south-of-the-border town of Mescalero has slowed while I try to figure out some problems with the church roof. With all the amazing new Western buildings available from companies like 4Ground, Game On and Knuckleduster, to name a few, I thought I might as well start putting together a more traditional Western town. The trouble is those laser-cut MDF buildings can get pricey pretty quick.

I first saw these PlastCraft Western Buildings on Miniature Market and I figured I’d give them a try. The kits are all basically the same, although the front of each building is different, and some have awnings while some do not. Each building kit comes with a resin door and window (varies by kit). You can’t beat the price: at less than $5 each I bought all six varieties. 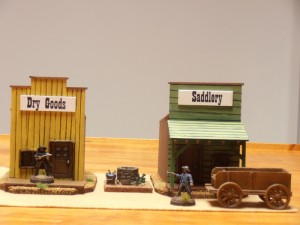 I posed some 28mm Blue Moon cowboys with these buildings to give you an idea of the scale. As you can see, the buildings are pretty small for 28mm and might be better suited to 15mm. The roofs are not designed to be removable, but I guess you don’t have to permanently attach them if you don’t want to. Regardless, the interiors are so small that there’s really no point in not attaching them. 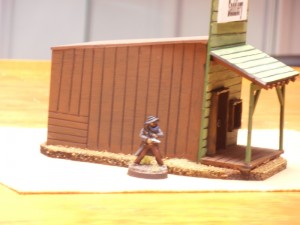 I have mixed feelings about these kits. I’ll give you my personal pros and cons, as well as discuss how I assembled them. I wish I had thought to take pictures of them before assembly, but I didn’t think I’d be writing a review of them. Sorry. 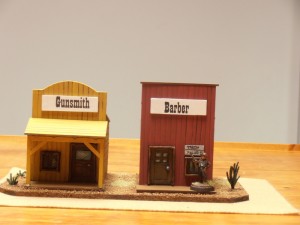 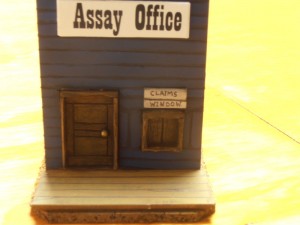 The low price makes it easy to overlook the annoyances. These kits would compliment some nicer buildings by the abovementioned companies, or may provide adequate scenery for a small outdoor skirmish on their own. You may notice I used some extra card bits to make signs on a couple of buildings like the one above. It won’t win any awards, but it adds a little something extra. You get plenty of leftover card to use in any way you see fit. For example, I considered making a plank bridge from one building roof to another, but scrapped the idea.

After I painted them, I realized my Western buildings look pretty bright and clean! I’m thinking of adding some weathering pigments to them to dirty them up a bit. You could paint them with less color to give them a more hastily-constructed or ramshackle look, if you prefer.

SHOULD YOU BUY THEM?

Yeah, if you’re looking to add a little extra to a town or if you’re on a tight budget (or both). As long as you have the patience to assemble them, these kits are fine for what they are, and a steal at the price.