Not quite a week into Monster May(hem), and I have finally completed my first submission. I present: the Scourge of Planet X: The Ripper Beast!

This miniature from Rattrap Productions has been primed and sitting on my desk since last year’s Monster May(hem). I never got a chance to get to him and moved on to other projects; so I made him my first priority this year. Partially, this is because I’m sick of looking at him; but it’s also because he has been so patient and understanding; two traits not normally associated with Ripper Beasts of Planet X.

The Ripper Beast, as the lore goes, is the most feared predator on Planet X. It loves nothing more than to live up to its name by ripping things, usually into bloody chunks. The Ripper Beast is doubly feared because it seems to regenerate as soon as it is wounded, making it nigh-impossible to put down for good.

Despite its renowned savagery, this Ripper Beast seems to be wearing clothing. It has two spiked wristbands and no dangly unmentionables to speak of. This either makes it smarter than you would think, able to clothe itself and perhaps forge weapons; or just oddly modest. The only picture of the Ripper Beast I could find was the one on the cover, there; so I couldn’t verify this. The only example of a painted Ripper Beast miniature I was able to find was the one inside the book, which doesn’t help because it’s black and white.

So I went with the clothing look, and I tried to get it as close to the cover as possible. It’s a retro sci-fi creature, so perhaps some space-spandex is appropriate after all. While I may never use this miniature as intended, it can sure get some use as a super-villain for games of Super Mission Force!

I have at least two more projects for Monster May(hem) I’m trying to get done by month’s end. Both require a lot of base work, so they’re taking longer than usual. Check back soon, but in the meantime, be sure to stop by and see what everyone else has been up to!

Don’t see your name here yet? No problem! Just email me at angrypiper@angrypiper.com or drop a comment below and let me know you want to participate! It’s never too late to paint a monster!

This could easily be the bloodiest game I have ever played in all my years of wargaming. It was like a Sam Peckinpah film on my gaming table.

With all the Super System 3 I’ve been playing lately, my Pulp gaming has been neglected.  So I had a couple of friends over for some .45 Adventure. (I have since bought the 2nd Edition, but we used 1st ed. the other night.) We started off with the scenario included in the rulebook, “Shootout in the Park”.  It’s designed for two players, but I modified it a bit to include three different teams. Basically, with the heroes in pursuit, a mob boss and his goons flee across a park (the battlefield), dropping two halves of an incriminating ledger listing all the bribed city officials the mob boss has under his thumb. Both sides are trying to find the ledgers and leave the park with them.

The two teams are .45 Adventure’s resident vigilante The Gargoyle and his ally, Ace Reporter Bridgit O’Rourke; and Mob Boss “Little” Paulie Wolinsky and his two goons, “Full Count” Nocerino and Tommy “Gun” Miller. I added a third team: corrupt cops! These cops know that if the ledgers get out, their crooked activities will be revealed. So why not just grab the ledgers and eliminate the mob boss while they’re at it?

The scenario ended with “Little” Paulie recovering both halves of the ledger and fleeing the park, leaving all three cops dead, and Bridgit O’Rourke out of action, pummeled mercilessly into unconsciousness by “Full Count” Nocerino.

Which set us up for the second (and bloodiest) scenario of the night…The Chase! 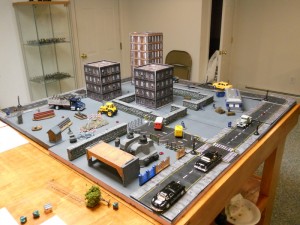 .45 Adventure is designed to be played on a 2’x 2′ surface, which isn’t a whole lot of room where vehicles are concerned. So I set up a 4′ x 4′ board as you see here. “Little” Paulie is in his car, fleeing from the Gargoyle, who is in hot pursuit. He has to make it all the way around the board and exit off the top near the construction yard. But a lot can happen before then. There are encounter markers along the road as well as in the city. To make matters worse, the streets are lit, but the rest of the board is dark, limiting models’ visibility to 12″.

The big dump truck in the construction yard contains a load of junk. Any model can take an action to dump the load if they are in base contact with the truck. This will block the road. It’s not a good idea to do that until the last possible second, however, as you never know who might be in the lead and you don’t want to prevent your own team from making their escape with the ledgers! 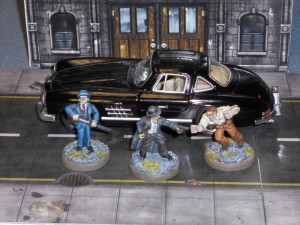 The heroes are The Gargoyle (center), ex-prize fighter Moe Shrevnitz (right), and eccentric, driven District Attorney Roland N Seguin (left), who is determined to rid New Commerce of crime! The Gargoyle is in his car, which is a bit better than your average buggy. The Gargoyle is Rank 3, while the other two are Rank 2. If Bridgit didn’t get creamed in the first scenario, she would have been here too. 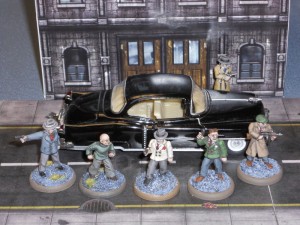 The hoods( from left to right) are Jimmy Gumballs, “Full Count” Nocerino, “Little” Paulie Wolinsky, Rocco Fortunato (nods to Frank Sinatra), Tommy “Gun” Miller, and around the back of the car, Jack Sacco, the driver. Jack and “Little” Paulie are in the mob boss’s roadster, fleeing from the Gargoyle. The rest of the goons are all on guard duty in the construction yard. Paulie is a Grade 3 Mob Boss, Rocco a Grade 2 Enforcer, and the rest are Grade 1. 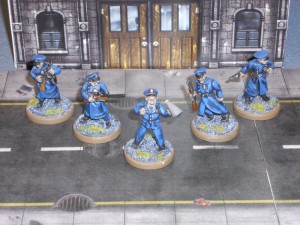 Any surprise the cops or heroes might have enjoyed was pretty much lost on the first turn of the game, when Officer Conlon opened up on DA Seguin with his rifle, scoring a head wound that the DA miraculously survived. From there it went south pretty fast in the construction yard. Within a few turns it looked like this. That’s “Full Count” Nocerino, Moe Shrevnitz, Officer Dearcy, Officer Landry, Officer Conlon and Jimmy Gumballs, all dead. Moe and “Full Count” learned the hard way not to show up with your fists to a gun fight. The star of the show was Officer Landry, who caved in Jimmy Gumballs’s skull with the butt of his shotgun and then, on his next activation, walked up and put a full blast straight into “Full Count’s” chest. 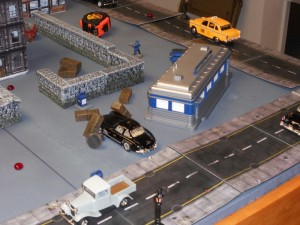 Meanwhile, with Jack Sacco driving, “Little” Paulie was free to fire at the pursuing Gargoyle with abandon. Despite having a faster and more maneuverable car, The Gargoyle was unable to catch “Little” Paulie before he lost control of the roadster after being wounded several times. He swerved off the road, running over and killing Officer Haggerty in the process. 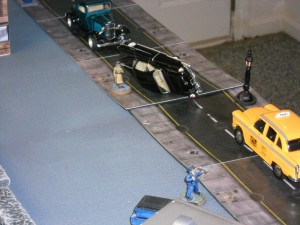 Eventually, The Gargoyle got his car back on the road and once again in pursuit. In the meantime, Sgt. Burke, after spending two turns climbing out of an open manhole he fell into (damn encounter markers!) shot and wounded Jack Sacco, who lost control of the car. It flipped over and landed on Sgt. Burke, who survived long enough to put a few more rounds into “Little” Paulie, wounding him in the arms. Neither Sacco nor “Little” Paulie could use their arms any more, they were so badly shot up. Which of course meant they couldn’t drive. Or shoot. They could just stand there and wait for Sgt. Burke to finish them off.

The Gargoyle had other plans. He swerved around the corner in his sweet ride, pausing long enough to shoot Sgt. Burke between the eyes before running down Rocco Fortunato, killing him. That’s 2 people the Gargoyle had murdered with his car. Over the course of the game, the Gargoyle had been shot so many times that he could barely use his arms and legs. Tommy “Gun” Miller ventilated The Gargoyle and his car a bit more, killing him. 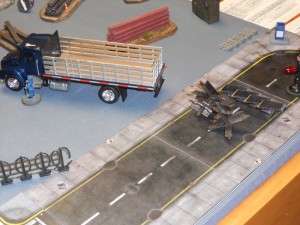 Hedging his bets, DA Seguin managed to get close enough to the truck to dump the junk in the road just in case Tommy “Gun” managed to get to the mob boss’s car and get it running again. Then he hunted Miller down like a dog, killing him. But not before Miller cut him off at the knees with a spray of .45 bullets from his Thompson!

So the end of the game looked like this: All cops: dead. The Gargoyle and Moe: dead. Tommy “Gun” Miller, “Full Count” Nocerino, Rocco Fortunato, and Jimmy Gumballs: dead. DA Seguin: crippled and crawling towards the car wherein Jack Sacco and “Little” Paulie waited, unable to do anything but look sadly at where their arms used to be.

Just another night in New Commerce! 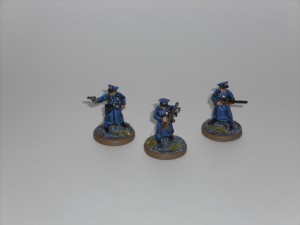 I got the pulp bug again, although to be sure I never really lost it. I painted these cops a while back for use with Rattrap’s .45 Adventure, which is my pulp rule set of choice. In truth, it’s the only rule set I’ve ever used to play pulp. I like it, though, so I haven’t needed to try anything else yet. 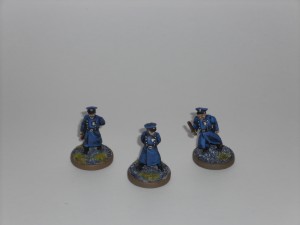 All these cops are from Bob Murch’s Pulp Figures line. Some of them are customizable, like the cop on the right in the picture above. You can give him either a billy club or a pistol. I opted for the club. 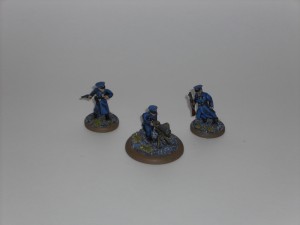 When the cops need a little something extra, they break out the big guns, like this machine gun here. The shotgun cop on the right is another customizable piece. 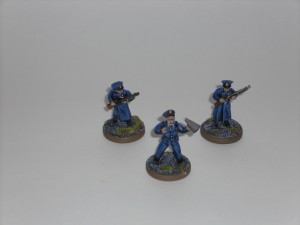 The sergeant with the megaphone is one of my favorite models. These cops were easy to paint all at once, considering they’re all wearing the same colors. Now I have more than enough police to take on my gangsters (coming soon).