The end of the year signals the end of WizarDecember as well. I would like to thank everyone who participated, whether by submitting miniatures or just by dropping by and viewing the work of some very talented hobbyists! A reminder to all to check the sidebar for some interesting blogs, some you may know, some maybe not. I plan on being a regular visitor to all of them!

Without further ado, the final wizards of 2015! 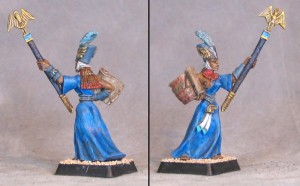 First up is TMP’s CBPill with another Wargods of Aegyptus miniature, an “Asar Mistress of Worlds”. While I don’t play the game, CBPill’s submissions for Dwarvember and WizarDecember have piqued my curiosity as the game seems to have some pretty nice miniatures associated with it.

Next up is a Scibor Tech Priest proxy for CBPill’s (not) Adeptus Mechanicus army! I love Scibor’s miniatures (especially the Dwarfs), and this one looks like another fine sculpt. I’d be wary of playing with him though, as the resin might not hold up to constant handling. But YMMV!!!

And finally, CBPill ends WizarDecember with “Stanley whose RPG character is a Wizard named ‘Palmyricus the Perfidious’ (thought that would be a silly change of pace.)” We probably all know a Stanley. Technically not a wizard himself, but don’t tell him that! “Lightning Bolt! Lightning Bolt!”

Thanks for all the great submissions, CBPill!! 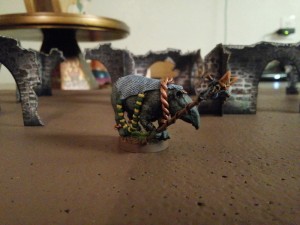 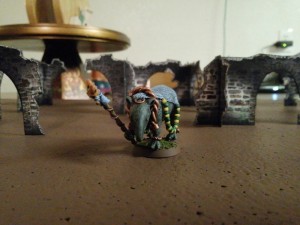 Next up is Punkrabbitt Returns’s  submission, which has to be one of the strangest and coolest wizards I’ve ever seen! This is Ooleekoo,  “a Morokanth shaman, essentially a sentient tapir native to Glorantha specializing in spellcasting.” Punkrabbitt has Frostgrave fever, and this looks to be a new wizard for yet another Frostgrave warband! You can see how he converted the original model and hear all about Ooleekoo over at his blog, Tumbahelada de Punkrabbitt, over in the sidebar! He used a plastic Toob figure! How frickin’ cool is that??? Awesome and inspirational job, Punkrabbitt! 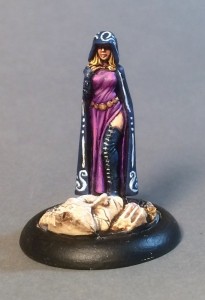 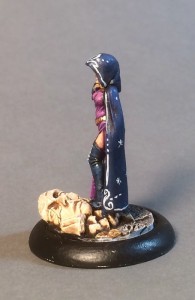 Another awesome paint job on another awesome base by TMP’s 144artist! This is another Hasslefree Kev White sculpt. The scenic base really adds a lot to the miniature and the freehand work on the cape is terrific! I generally suck at freehanding anything, but after seeing 144atrist’s work and what a difference it makes, I’m going to have to try it more often! 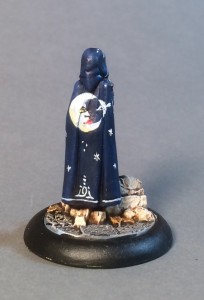 Here’s a closeup of the detail work on the rear of the cape. Thanks for participating in both recent painting challenges, 144artist! 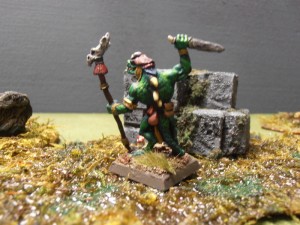 Finally, here is my submission. I originally planned a big blowout to WizarDecember, but then I got a PS4 and Star Wars: Battlefront, so…it didn’t happen. However, here is a lizard-wizard for your perusal! This is a Reaper Lizardman Shaman. I’m happy I got to pose him amongst my recently created swampy terrain, even though the pictures aren’t spectacular.

In other news, amongst my Christmas loot this year I received a Barnes and Noble gift card, which was promptly put to use purchasing Frostgrave and Thaw of the Lich Lord. To my newfound friends who submitted wizards this month, I can no longer resist the pull of this highly reviewed game. I credit Punkrabbitt in particular for all his warband submissions in November and December. So hopefully, I will play some Frostgrave in the near future and write some AAR’s about it! (Although I don’t think a Lizardman warband would work so well. Being cold-blooded in the frozen city? Might result in at least an initiative penalty or two. 🙂

I’m taking a break from hosting painting challenges for a while, in part because I can’t find a word to work into “January”, but mainly because I need some time to focus on projects I’ve let go (like Imperial Assault) in favor of Dwarfs and Wizards for the past two months. I’m more than willing to participate in someone else’s challenges, if the subject is right. So someone pick up the glove!

Thanks again to all! Happy New Year!

This week was my birthday, and between that and the general holiday madness it was a challenge to be able to submit anything this time around. But WizarDecember stops for no one until the 31st! So, without further ado, here are the wizards! 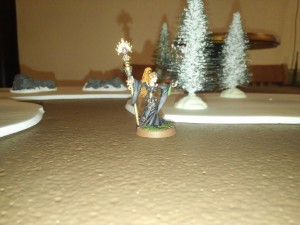 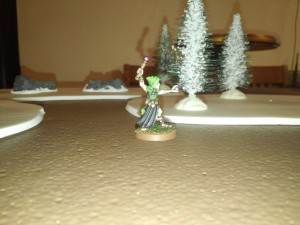 First up is Punkrabbitt’s Week TWO submissions, here a little late but welcome nonetheless. You can read all about his Frostgrave warbands over on his blog, Tumbahelada de Punkrabbitt, accessible through the sidebar if so inclined. Up top is the old Citadel wood elf Queen Alarielle, circa late 90’s. Below that is an old Citadel wood elf mage. Together they’re a wizard and apprentice for Frostgrave, respectively. 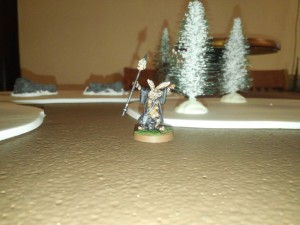 Punkrabbitt’s week three submission is a conversion of a Reaper Bones miniature. Using an Iron Wind Metals rabbit head, Punkrabbitt converted this wererat to be a bunny-headed wizard for yet another (bunny or Chaost-themed) Frostgrave warband! Awesome! 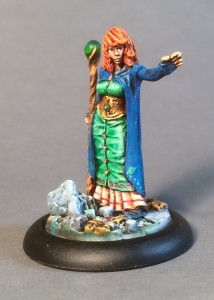 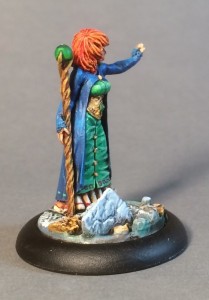 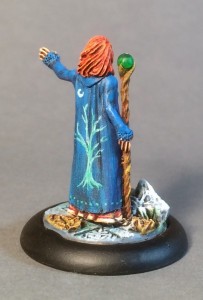 TMP’s 144artist submitted this Hasslefree female wizard, again for use in…you guessed it…Frostgrave! (I gotta get into this game.) 144artist combined some terrific brushwork with a Micro Arts Studio base and here is the result! I particularly like the blending on the crystal ball and the designs on the hem and back of her robe. Thanks again, 144artist!

These two are from TMP’s CBPill. Up top is an old Celtos Kev White Sculpt that is a new version of CBPill’s Necromancer from an old WarGods of Aegyptus world campaign. (His words, not mine.) And on the bottom is a “wizard-type from the Dark Fable line of Ancient Egyptian minis.” Both look great. I’m considering an Egyptian-themed pulp game in the future, and that guy on the bottom would fit right in. Thanks again, CBPill!!!

Lastly, here is my submission for the week: this RAFM Wizard with Wagon. I’ve always loved the opening scene in the Fellowship of the Ring, when Gandalf rides into Hobbiton in a wagon loaded with fireworks. So I guess it’s no surprise that I went for a Gandalf look when I painted him. 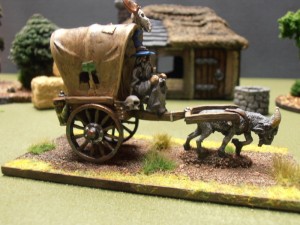 I now wish I painted the goat more of a whitish color. I painted him first, then decided on the Gandalf look, so by the time I painted the wizard it was too late to change the goat around and make my deadline. Although I used different colors, they look a little too similar for my liking.  Also, it seems I need to rub off some of the static grass on the side of the base. Ooops. 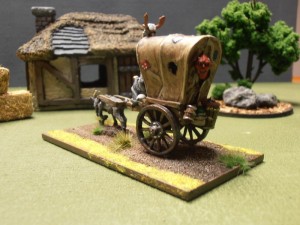 This is one of those miniatures with a lot of character. I’m not sure what this fellow poking his head out the back is supposed to be, so I just went with a standard “red demon” look.

WizarDecember concludes next week, the day after Christmas! Happy Painting!

WizarDecember officially gets underway this weekend with some impressive submissions! And here they are! 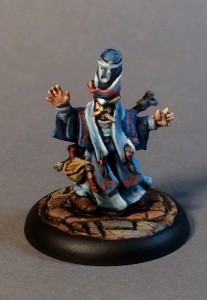 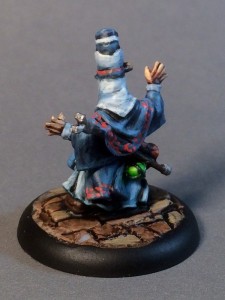 First up is TMP’s 144artist with this Reaper Pathfinder gnome summoner! I really like the “iconic” Pathfinder series of miniatures, and with 144artist’s paint job, it’s not hard to see why. Thanks for the submission! 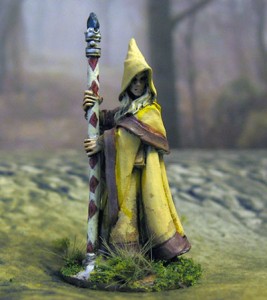 TMP’s Skrapwelder sent in this Reaper wood elf mage. Awesome work. I’ve always found yellow to be a tough color to work with, especially shading it well. I also really love the face in this miniature: perfect shadowing! Thanks, Skrapwelder! 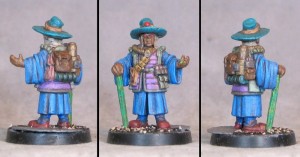 Just under the wire, TMP’s CBPill submitted this interesting fellow. CBPill explains: “This is a figure from the Colony87 Kickstarter. He’s supposed to be a space merchant, but he really looks kind of wizardly to me, so that’s how I painted him and put the green magic swirl in his left hand.”

Works for me! I also like him as a space merchant! 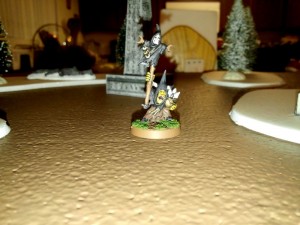 Punkrabbitt returns returns for WizarDecember as well with this GW goblin shaman from Battle for Skull Pass. Punkrabbitt says it’s for yet another Frostgrave warband. I’ve managed to resist the pull of Frostgrave so far, but it’s getting harder everyday with all the great reviews, and miniatures like this just highlight the possibilities… Thanks, Punkrabbitt! 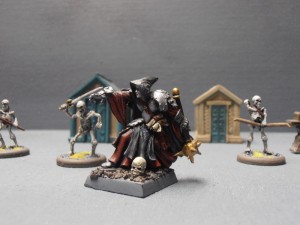 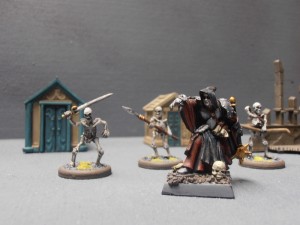 Lastly this week is my submission: this Reaper “death priest”. I posed him with some skeletons from Mississinewa Miniatures (sadly gone, now) and some Armorcast mausoleums, just for effect.

That about does it for this week!  See you on the 12th, and Happy Painting!

Flush with the heady wine of Dwarvember success, I have decided to host yet another painting challenge for December. As the title of this post implies, it will be wizards that are the focus of this month’s challenge.

Once again, the “rules”:

Pics/links will be posted here every Saturday in December, starting on the 5th.  The other dates will be the 12th, 19th and 26th. I’m pretty lenient on the submission times. Just get it to me by the end of the weekend to be included in that week’s post. And no fair submitting miniatures painted prior to December!

Wizard miniatures may be from any company, and any scale, and any genre! So if you want to paint a traditional spell-slinging mage, go for it. Or if you want to break out the Cthulhu priests or Shadowrun shamans, that’s perfectly acceptable as well. Clerics, druids, necromancers…we don’t discriminate here!