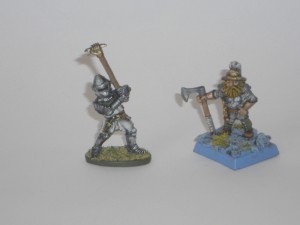 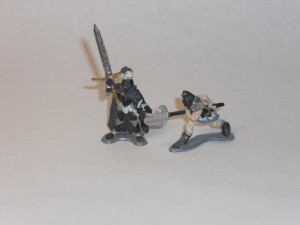 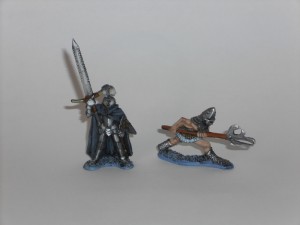 Like most miniatures enthusiasts, I have an ever-increasing mountain of unpainted lead and plastic that might one day get me my own episode of Hoarders.

Well, I will not go gentle into that good night, friends. I’m doing something about it. They say the first step is to admit you have a problem. Well, I submit to you my pile of insanity. Judge not lest ye be judged. I know some of you are worse. 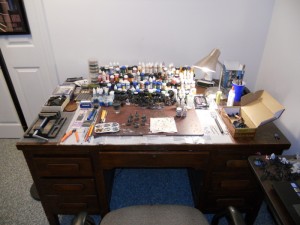 First up: my desk. Thousands of miniatures have been painted and, in some cases, repainted here. Considering 90% of the painting I do nowadays is for the AD&D campaign I’m running, I have to be careful about what I show so as not to give my players any warning of what’s coming. In front of the paint rack is a group of miniatures, most of which are primed black. Some have been in this state for YEARS. The current project is a group of 10 Wargames Factory Zombie Vixens. Once these are done I have 20 more to paint. You may notice the backscratcher on the right. Highly recommended for those of us who spend hours painting hunched over. 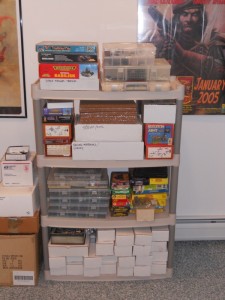 This rack contains leftover bits on sprues,  Plano cases full of painted miniatures (don’t count), old boxed sets of Grenadier and Ral Partha miniatures (one day I’ll get around to repainting them), basing materials and supplies, etc. All the white card boxes are full of Heroclix miniatures, sorted by team. There are some hidden gems here, too. For example, I have about 40 Rogue Trader Beakie Space Marines, still on the sprue. I’m saving them for a rainy day. 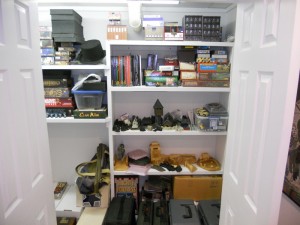 Here is one side of my closet. The miniatures are on the second shelf, all unpainted: boxed sets of Wyrd, Confrontation, Alkemy and Privateer Press stuff; an unopened High Elf Battle Ready Battalion; an unopened WFB Battle of Skull Pass; several unopened regiments of High Elves, including a Cavalry Patrol; my Cawdor Necromunda Gang; some Warzone stuff I bought just because I liked it; a box of Defiance UAMC Marines; a box of Wargames Factory Shock Troopers (soon to be joined by 2 more boxes en route); a Reaper Dwarf Cannon; some Mantic Dwarfs, a box of Judge Dredd Gangers I bought at Gen Con for 5 bucks; and a Clan War Crab Regiment to go with the Clan War base set I haven’t painted. It’s over by the Space Hulk game that has all unpainted miniatures in it, too.

Below that are three shelves full of mostly unpainted scenery. Yes, that’s an original Warhammer Mighty Fortress. I’ve never used it, but that doesn’t mean I won’t. Three boxes of Pegasus Gothic buildings and ruins share the same shelf, along with a GW Chapel. (All those tackle boxes and miniatures cases have painted WFB and 40K armies in them, so they don’t count towards the pile of insanity.) 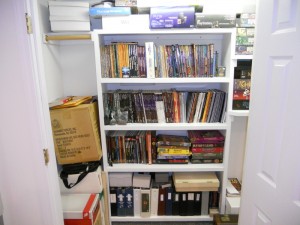 Here’s the other side of my closet, just for the hell of it. No miniatures here, just RPGs and card binders. 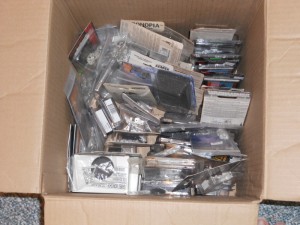 You could dive into this and never come up.

And lastly, here’s the box o’blisters. Way too much stuff to list here individually, but Reaper, Hasslefree, Pulp Figures, Armorcast, Warhammer FB, Privateer Press, Confrontation, Moonlight Miniatures, East Riding Miniatures, Wyrd, Killer B, Bronze Age, Rattrap and plenty of nameless and/or forgotten miniatures companies have at least one and most likely more than one blister in here.

If I was so inclined, I could count all the unpainted miniatures I have to paint. But I’m not so inclined.

After a recent barrage of orders, I decided I need to do something about this. I can’t keep buying stuff and not painting it. That’s craziness. So I’m doing what others in this hobby of ours have done. I’m making a plan.

Over the last 2 weeks, I’ve painted 20 miniatures. I’ve bought about 50. So I’m starting over. Monday-Monday…10 miniatures, no new purchases.