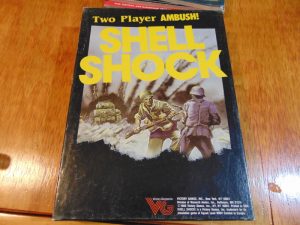 With the recent demise of my AD&D campaign, I have decided to downsize some of my miniatures, especially those that I will no longer have a need for now that the game is over, as well as those “Oooh, shiny!” bits I bought on impulse but will realistically never use.

Shipping will be in the cheapest USPS flat rate box I can fit it in. Of course I will combine shipping on multiple items, but I’m only shipping to the lower 48. Sorry! 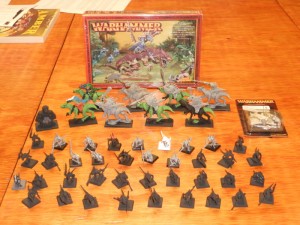 First up: a mess o’ GW Lizardmen. 38 skinks, assembled and primed. 8 Saurus riders on cold ones, assembled and in some cases, partially painted (not by me). A Terradon rider, New in Blister, and Kroq-Gar on Carnosaur, New in Box, still shrink-wrapped. Plus, I’m throwing in a Saurian Idol from Hydra miniatures, just because I’ll now never use it and it’s a cool terrain piece, as well as a ton of lizardmen/skink bitz.. Buying this stuff new from GW would cost over $175, not including a bunch of skinks and the Saurian Idol. Of course, I’m not GW, so I’ll take $100 for everything, plus shipping. 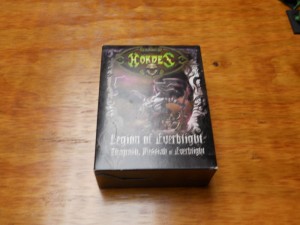 Fourth: A Hordes Legion of Everblight Thragosh the Messiah, New in Box. Retails for $45, I’ll take $30 plus shipping. 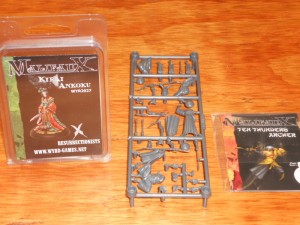 Fifth: Some Malifaux odds and ends: Kirai Ankoku, New in Blister, and a full sprue with cards of Ten Thunders Archers. I bought these guys at Gen Con a couple of years ago, and I threw out the box so it would fit in my carry-on. But everything is there. About $40 retail for both, I’ll take $20 plus shipping. 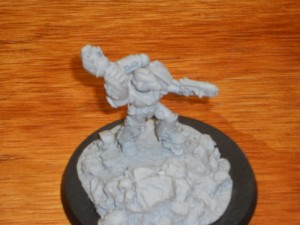 Last: a Rogue Trader commemorative marine, in Finecast. It’s missing the banner pole. Came to me in a trade, and I don’t want it. $10 plus shipping and it’s yours.

Email me at angrypiper@angrypiper.com or PM me on The Miniatures Page if interested.

I’d like a few more of those Dwarf Wall Obstacles that came in Battle for Skull Pass, if anyone’s got them.

If offering cash money, you should be aware that I only take Paypal.

Well, ZeDecember didn’t really work out as planned, mainly because I got distracted halfway through it and failed utterly to rekindle my painting spark. Some of that was due to the holidays, some due to real life, and some due to the fact that I’ve been in a painting slump lately.

One thing I have been doing is re-reading lots of my old comics and playing copious amounts of Batman: Arkham City on PS3. Yeah, I know I’m late to the party, since this game came out in 2012, but I’ve never been one to rush out and buy a new game when I have dozens of games I haven’t even opened yet just laying around. Suffice it to say, however, that aside from playing PS3, I haven’t done all that much for the past couple of months.

In an effort to get my ass in gear, I came up with a scenario for SuperSystem 3 involving a “Year One” Batman and Captain Gordon vs. Two-Face. Even Year One Batman is pretty damn formidable (my build came in at 120 points) despite his inexperience, and Two-Face just isn’t all that powerful a villain (my build came in at 71 points), so I had to tweak the rules a bit to make it more of a challenge for Batman. Here is what I came up with:

The Scenario: Two-Face decided to rob the Gotham Savings and Trust building. Actually, the coin decided for him. He put together two squads of highly trained goons, came up with two plans, and went to work double-quick.

A specialized GCPD SWAT team, led by the arrogant and trigger-happy Lieutenant Branden, arrives on the scene shortly afterward.  Also rushing to the scene, hoping to avoid the certain collateral damage that is to occur when Branden and his team is unleashed, is Captain James Gordon. But neither the SWAT team nor Two-Face counted in the new player in Gotham City: The Batman.

Forces: One player controls Two-Face and his two squads of goons. The other player controls Batman and Captain Gordon. The SWAT team begins play under the control of the hero player, but that may change (see below).

Setup: The board represents a section of Gotham City. The buildings are mostly not important, but there needs to be a building big enough to represent a bank, complete with interior.  The bank has 2 exits and several windows. Two getaway cars are parked outside the bank on either side. There should be a separate escape route off the board for each getaway car.

Deployment: Two-Face and his goons begin play inside the bank, looting. Gordon begins in a squad car on one corner of the opposite table edge, while Branden and his SWAT team deploy on the other corner. Batman may be deployed anywhere on the board, but must begin at least 20” from the bank.

Objectives: Two-Face wins if he can loot the bank and make his escape off the board by one of the predetermined escape routes, or if he kills Batman. Batman wins by stopping Two-Face.

The Coin: Any time the Two-Face player wishes to do something where there are two clear alternatives, he must flip a coin and let the coin decide.  Examples include choosing which way to exit the bank, choosing which getaway car to use, choosing which escape route, choosing who to shoot at, etc. The only exception to this is that Two-Face can always elect to shoot at Batman without tossing a coin.

Two Squads: In order to give Two-Face better odds than he would otherwise enjoy, he is allowed two squads of Veteran henchmen for this scenario.

Looting the Bank: At the start of the game, roll a d3. The result is how many rounds Two-Face and his goons must spend looting the bank before they can attempt their escape. Looting the Bank is a Difficult (2) Mind roll. Two-Face doesn’t have to make the roll (but he has a better chance of doing it than his henchmen).

SWAT Team: Lt. Branden is a bit of a psycho, and is just as likely to shoot at Batman than at Two-Face or his goons. If the SWAT team ever has line of sight to Batman, they activate immediately and open fire.  This happens outside the normal activation sequence and control of the SWAT team reverts to the Two-Face player for as long as they have line of sight to Batman.

Gordon Takes Command: If Captain Gordon can get within 10” and has LOS to the SWAT team, he can effectively take command and the SWAT team will not fire on Batman. This command is lost if Gordon ever leaves command distance, however.

Batman won’t attack cops no matter how much he may want to.

“What are you??!” Batman has a special power for this scenario: Fear Aura. Anyone in short range must make s Difficult (2) Resolve roll or be afraid. Batman gets +1D to Attack and Defense rolls against models he has frightened until they make their Resolve roll. Two-Face is immune to this power.

I gamed this scenario a couple of weeks back. Sorry, no pictures this time. I played Two-Face, while my friend took the role of Batman and the cops. Although it was fun, it had its share of problems.

First, it’s not all that hard to keep Batman out of the SWAT team’s view, so he never had to worry too much about getting shot at by Branden and his men.  This could be further abused by the fact that the same player has control of the SWAT team and Batman at the start of the game, so if they wanted to be unscrupulous about it, they could basically ensure that Batman stayed far away from the SWAT team. (My friend didn’t do this, however. He’s a good sport.)

Second, the game quickly degenerated into the SWAT team and Gordon firing away at Two-Face’s goons (and vice-versa) for most of the game, without either side really doing any significant damage to the other. I think this is because they were too similar. They had the same Vitality, similar stats, and they were all Veterans.

Third, even with a big screen of goons to hide behind, Two-Face is just no match for Batman. Although he managed to flee the bank, Batman brought him down in short order without too much trouble. Two-Face spent three turns just trying to break out of Batman’s Entangle power while Batman waded through his goons without breaking a sweat.

It was fun, however, and we both enjoyed the randomness of the coin tosses and the moment when Batman got to use his Fear Aura on the goons in the bank.