I own a lot of Heroclix miniatures, but I don’t play Heroclix. Instead I use them with my favorite Superhero rules system, Supersystem 3.  I use Heroclix miniatures because I game with established Marvel and DC comics characters rather than creating my own heroes. (Until recently, there was a terrific online  archive of SS3 stats for Marvel and DC Heroes, but that seems to have disappeared. Bummer.) I never liked the Heroclix system. The dials really annoy me, and it doesn’t seem right that heroes gain and lose powers as the dials get clicked.  For example: I think Superman should be able to use his heat vision whenever he wants to fry something, not be limited as to when he can use it based on how much damage he’s taken.

There are a lot of companies making superhero miniatures in 28mm. I would get into some of them, but my fellow supers enthusiast from across the Atlantic, Carrion Crow, has already done that comprehensively over at his blog, and there’s really nothing I can add. (Incidentally, Carrion Crow has done a bunch of articles on converting Heroclix that are well worth the read, as they’re quite inspirational and really show the versatility of these miniatures, even for games outside the Supers genre.)

So why use Heroclix? The answers should be obvious, but…

The quality of the sculpting and the factory paint jobs seem to have an inverse relationship over the years, at least in my opinion. In the beginning, the sculpting seemed to be generally ok, while the factory paint jobs bordered on the atrocious. As the years and releases accumulated, it seems the reverse is now true. Scale, especially when compared to the earlier releases, is disproportionate. But the paint jobs are generally better.

Still, they’re not good enough for me, so what follows is a tutorial of sorts on working with Heroclix, specifically rebasing and repainting them. I will say in passing that converting Heroclix is a breeze, as they’re made of fairly soft plastic, so weapon/head swaps are easy. (Again, if conversions are your thing, I highly recommend Carrion Crow’s Buffet over in the sidebar, as well as Dick Garrison’s Rantings from Under the Wargames Table.) 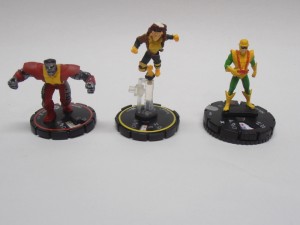 Heroclix bases have changed over the years. Above you can see the three types of bases. On the left is the original design, in the middle is the original “flying” base design, and on the right is the current design.  A few words about each:

Original clix came with a different-colored ring on the base, denoting the experience level of the model (Yellow=Rookie, Blue=Experienced, and Red=Veteran). This made a difference in the Heroclix points cost for including the model on your team. (A more experienced version of a hero cost more points.) Silver or other colored rings denote unique, promo, or special versions of heroes and villains. Some of these can get quite expensive to purchase on the secondary market, although many, especially from the older sets, have come down a lot in price. 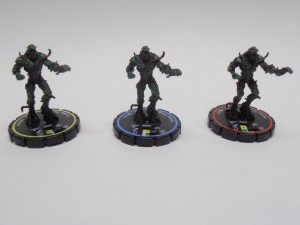 Generally speaking, a more experienced version of a model costs more money on the secondary market, but this isn’t always the case. Regardless, many of these miniatures used the exact same sculpt regardless of experience level (see above) which is great news for those of us who don’t use them for Heroclix, as any version will do. So, just buy the least-expensive version available!

Flying bases come in two varieties, shown above. As you can see, the Human Torch model sits on a plastic disc that fits over the top of the flying base. In contrast, the Green Lantern model has a peg on his foot that fits into the flying base. For whatever reason, flying bases no longer exist in the latest Heroclix sets, and even models that fly are sculpted on the ground, like Ms. Marvel above. I only rebase the flight stands in the “peg-leg” cases like Green Lantern. When rebasing models such as the Human Torch, I pop them off the plastic discs and rebase them without flight stand. (That’s my preference, but YMMV).

The newer bases are bigger and blockier, and have no color rings denoting experience levels (something else they decided to do away with, it seems). Fair warning if you plan on rebasing miniatures on these bases: they are MUCH harder to work with than the earlier colored bases. models are now sculpted onto a plastic crescent, and it’s often easier to remove the crescent from the dial than to remove the model from the crescent. 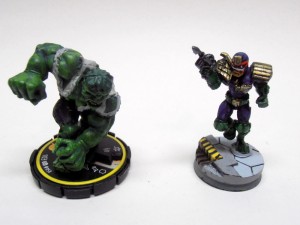 There are several ways you can remove a Clix model from its dial. First is brute force, which I don’t recommend. Bigger models, such as the Hulk above, can be wrested off the dial without much worry of damaging the model, but why risk it?

The second way is by using a hobby saw or Dremel to saw the figure off the dial. Again, I don’t recommend this as at high cutting speeds, the plastic will melt. This stinks, and can also alter the shape of the model’s feet.

The best method I have found to remove a Heroclix model from its base is the following. First, throw the model (or the flight stand) in the freezer for at least an hour. This makes the plastic brittle. Then, remove it from the dial with a pair of nippy cutters. If you go slow enough, it should pop right off with no problem. Note that clix models with thin legs are vulnerable to snapping even if this method is used, particularly if you don’t take the time to cut slowly. One good thing about Clix, however, is even if they snap, the break is usually clean enough that you can heal it with some superglue. That was the case with the rebased and repainted Judge Dredd model above, and you can’t tell the difference now. 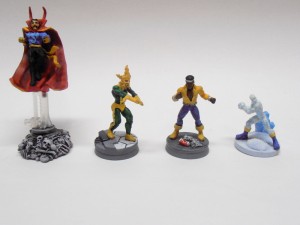 Once you have the model off the dial, it’s up to you what kind of base you want to put it on. I find that Heroclix adhere readily to resin bases with superglue, but you may want to take the added steps of drilling and pinning in order to secure a firm transplant. The Dr. Strange model is based on an old metal RAFM fantasy base. He’s a good example of a transplanted peg-mounted flying base.  Electro is glued to a Micro Arts Studio Tech Base. Power Man is based on an Armorcast Urban Base, while Iceman is based on a piece of MDF, snow-flocked and enhanced by me.

Again, the choice to rebase or not depends on how much you hate the dials. I loathe them, but I’ll still use Clix models on the dial in a pinch. If you want to see an example of an AAR using rebased an repainted Clix (as well as other models), check one out here. If you want to see a Supersystem 3 game using unaltered Clix, look here. I think the first game looks better, but both were a blast regardless. 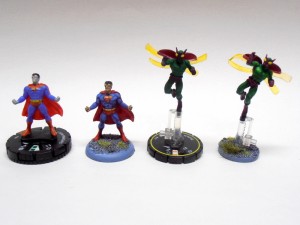 As I said before, it’s no secret to anyone with eyes that Clix models generally have poor paint jobs, especially the early releases. As you can see in the picture above, repainting a Clix model really achieves some dramatic results over the factory paint job, and repainting is a surprisingly easy and often fast option for those who can’t abide poorly painted figures (like me). Above is a before and after comparison. Although not a true before and after, as they are different figures, you can see what a factory painted miniature looks compared to one I’ve repainted. The one on the left is a new “Superman Robot”, which I repainted and rebased to be a perfectly adequate Superman. The one on the right is Marvel’s Beetle. I added highlights rather than a giving him a full repaint.

Since I don’t strip my Clix, I have no need to prime them. The factory paint job is perfectly fine as a first coat. Although some of the early Clix models are so heavily painted that you may find subsequent coats obscure detail, this is usually a problem with individual models and is easily remedied by simply using another figure. 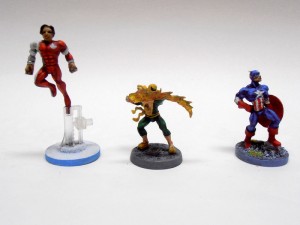 In many cases, repainting a Heroclix model is merely a matter of adding highlights rather than starting from scratch. This Northstar miniature was painted with highlights only. In contrast, the green on Iron fist was originally red (it was the only version of him I had), so I needed to paint a dark green basecoat on and highlight from there. Captain America was originally a much lighter blue. I repainted him a darker blue and highlighted upwards. 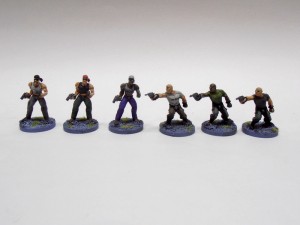 These criminals and henchmen were completely repainted to give them some variety. 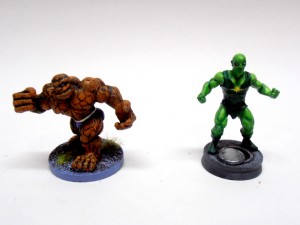 In the above picture, the Thing was given a black wash over his original paint, and then highlights of orange. In addition, I trimmed his eyes because they were way too big on the original paint job. Radioactive Man was repainted a darker basecoat and highlighted upwards, much like Captain America.

If all you’re doing is highlighting the existing paint job, you can blow through repaints in record time and still enjoy quality results. But here is another tip to speed-painting Clix: 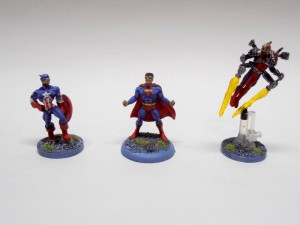 Heroclix generally use the same paint shades, as seen in the picture above. If you want to repaint a lot of Clix all at once, it makes sense to grab a handful of miniatures that use the same colors and do them in batches. Of course, if you need specific heroes and villains, this may not be an option in the short term. But, if you’re planning a game down the road, you may want to paint some miniatures you may not have a use for immediately simply because you’re painting similar colors on the miniatures you do need. For example, even though I have no immediate plans for Superman, I painted him at the same time as Captain America and the Fixer because they use the same colors. Neat, huh?

I plan on doing more Supersystem gaming in the near future, so watch this space for more Clix repaints and AARs!