Recently, over on The Miniatures Page, I asked the Warhammer Forum whether or not I should just break down and buy The Island of Blood Starter box.  I figured I could buy the boxed set and use the High Elves, selling off the Skaven to recoup some of the cost of the set. There were many reasons not to make this purchase, and only one real reason why I wanted to (because I’m sick). For those interested in how the thread went, you can find it here: TMP Link. For those others who don’t want to bother, I’ll briefly recap below.

I haven’t played a game of Warhammer Fantasy Battle  since about 2003 or so, and only recently got back into painting miniatures at all. I started playing WFB with an Undead army, prior to GW splitting up the Undead into two separate armies, Tomb Kings and Vampire Counts. With my army effectively cut in half, I decided to start another army that had been interesting me for some time: Orcs and Goblins. This would become my main army for most of the time I spent playing WFB.

Still, as any wargamer knows, sooner or later you want to try something new. I wanted to play the good guys for a change, and I specifically wanted an army with some decent cavalry. I started with some Brettonians, since they came in the boxed set; however I quickly abandoned them before I spread one drop of paint, because I read their army book and found them to be unbelievably cheesy/beardy/unbalanced. I moved onto Empire, but never really found the time to paint them, so I sold off what I had. A couple years later, I broke down and bought the High Elf Cavalry Patrol boxed set below, because it was a small force and didn’t require much of a committment in either time or money. I figured I could use it for some small skirmishes. I quickly added a regiment box of Silver Helms and a Regiment box of Spearmen to add a few more core troops to the force. 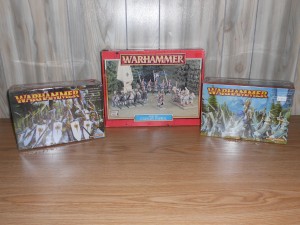 As you can see, I never even opened the boxes. They went into storage along with the rest of my miniatures, where they sat until last month. In the meantime, the game store that I patronized changed ownership. I never set foot in the new store, which I didn’t even know had  opened until a year later. That didn’t matter either, since they went out of business long before I pulled these miniatures out of storage.

Which brings us to last month, when I got the undeniable urge to paint up a High Elf army, even though I know I will probably never play them. Ever.

I took my dilemma to The Minatures Page, and I was pretty much universally encouraged to buy and paint more elves (although some folks told me just to paint what I have and keep it a skirmish force due to the cost, time, and let’s face it, stupidity of buying and painting a force I will likely never use).  Tiny Legions, a fellow TMPer, was kind enough to point out that the miniatures in Island of Blood are significantly larger than the miniatures I had, and even posted some comparison shots. In the end, I decided I would probably buy IOB anyway. But I didn’t. 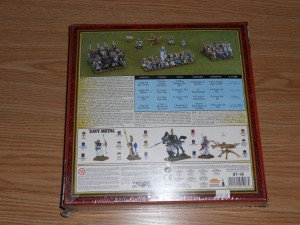 Instead, I got a pretty good deal on the Battle Ready Battalion above, mainly becasue I found a place that has LOADS of GW backstock and wants to get rid of it. The BRB I got is from 2003, still mint in box. I picked it up for half price. Which now means I have more elves to paint. So, as of now, my High Elf Army consists of:

Altogether, not too bad. A little cavalry heavy, perhaps. I’d like to have fewer Silver Helms and maybe a few more Reavers and another unit of Archers. And a unit of elites would be nice. I always felt sorta “Meh” about Phoenix Guard and White Lions (elves with axes? C’maaaaaan.) I’d opt for some Swordmasters, because they’re the coolest, and because i snagged an old-school blind Eltharion miniature from the same store., and he could champion the unit. And of course, I need a wizard, which means my army just isn’t complete yet.

Now for the worst part. I always wanted to play Dwarfs, because Dwarfs are hands-down my favorite fantasy race.  When I initially got into WFB, a friend of mine quickly laid claim to the Dwarfs, so I picked Undead so we could fight each other. I got my ass handed to me by his Dwarfs too many times to count. When I switched to Orcs and Goblins, I lost even more, because my own Animosity rules frequently lost the game for me.  I always wanted to play Dwarfs, and still do.

Which is why I bought this, too. 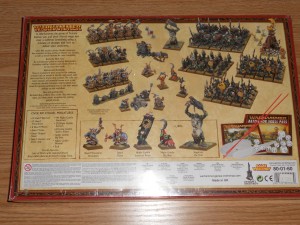 The Battle for Skull Pass, which was also discounted since it’s the last edition of WFB. I just bought it for the Dwarfs. Although the Goblins look very cool,. I painted enough green skin in the late 90’s to know that I don’t want to paint any more. So my plan is to sell off the Goblins. Perhaps I’ll keep the Troll, and I like the Spider Riders, which look way better than the old metal ones I have. We’ll see.

So now I have the makings of a nice Dwarf skirmish force:

I don’t like the sculpt on the Thane, and I always found Dwarf Slayers of any type to be stupid.  Just my opinion. So, not content with what I have, I am awaiting the conclusion of a trade in which I have acquired 36 more Dwarfs: 18 Miners and 18 Hammerers, as well as a Dwarf Organ Gun. I’ll probably pick up a better Dwarf Thane model too. Lord knows there are plenty of them out there, most of them not even made by GW.

So now I have an additional 183 miniatures, including the horses, to assemble, paint and base. Did I mention I’m just as likely to play these Dwarfs as I am the High Elves? In other words, it’s probably never gonna happen.

Why did I do this? And why am I so looking forward to it? 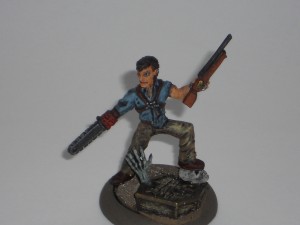 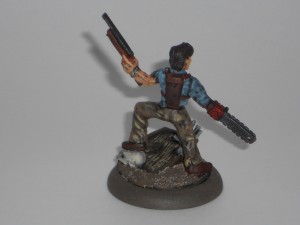 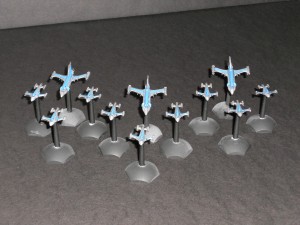 Here we have the noble defenders of Earth, the Galacteers. Once again it’s the starter fleet from Hydra Miniatures, with 3 Class 2 and 9 Class 1 rockets. 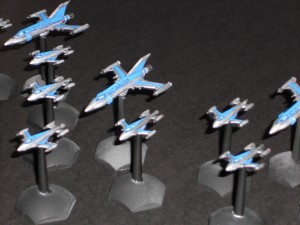 I went with a silver and blue theme for these ships after trying about 3 other color schemes. This one worked the best for me. It also gave me the chance to paint with metallics on a large scale, which is something I rarely do nowadays. The Galacteer Class 3 ships look very cool and I’m tempted to buy one just to have, but so far logic has prevailed and I will try the game out first before committing myself to any further purchases. 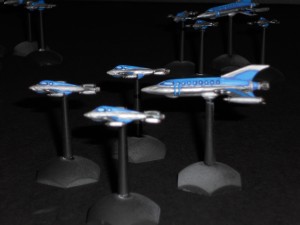 Close up of the ships

Finally painted up my starting War Rocket fleets. Above is the Imperial starter fleet, available from Hydra Miniatures. The Imperial Fleet is the military force of the evil cosmic overlord Marduk, and in my opinion, the coolest-looking of the fleets. 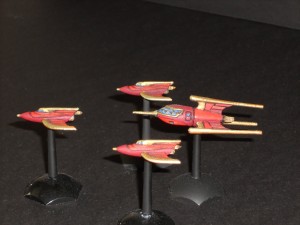 Starter fleets come with 9 Class 1 and 3 Class 2 Rockets, which is enough of a force to play a decent game.  Depending on whether or not I like the game, I may invest in more fleets, or at least some Class 3 and Class 4 ships. They certainly look cool. 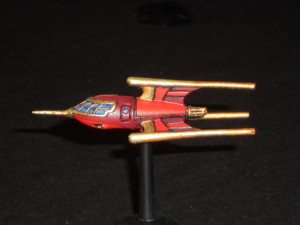 Close-up of the Imperial Class 2 Rocket