Back in the day, I was a big fan of the old Marvel Super Heroes RPG from TSR (still am, in fact). I thought some of their adventures might make fun scenarios for Supersytem 3, and it turns out I was right! First up is the introductory adventure included with the basic set: MSH0: Day of the Octopus!

A brief synopsis: That tentacled creep Dr. Octopus is at it again! This time his scheme is to become “Supreme Ruler of New York City” (yes, really). To that end, he has created a 30-foot tall robot duplicate of himself that will destroy Manhattan unless the heroes can stop it! (Because, you know, that’s  the best plan an insane, genius nuclear physicist could come up with.)

FYI ALL of the published adventures, as well as the rulebooks for TSR’s Marvel Super Heroes are available at Classic Marvel Forever in PDF format, and they’re FREEEEEEEE! Many of them are delightfully terrible, with questionable storylines, lame villains, and encounters that make you scratch your head and ask WTF??? But all of them seem easily adaptable to SS3, and 99% of the heroes and villains used in all of them are available as Heroclix models!

Without further ado, the dramatis personae: 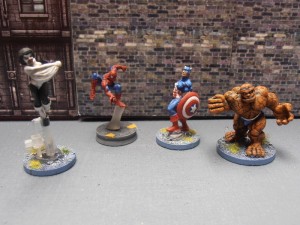 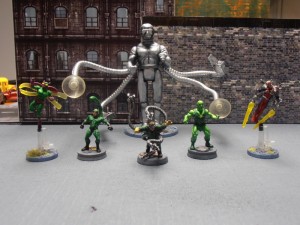 The main villains (L-R): Beetle, Scorpion, Dr. Octopus, Radioactive Man and the Fixer! (Fixer looked different back in the day, but this newer version is the only Clix model of the Fixer, so I’m stuck with it.) And of course, looming menacingly in the back: The Octodroid!!!!!

As is usual with most starting adventures, the heroes far outclass the villains. I assumed the bad guys would need some help, so I added Constrictor and these killer robots as reinforcements. The robots are repainted and rebased Horrorclix Carnage Bots.

If you’re wondering about the Octodroid, he’s this old Toy Biz Marvel figure, spray-painted silver. I picked him up on eBay for 8 bucks including shipping. Not bad, eh? Onto the game! 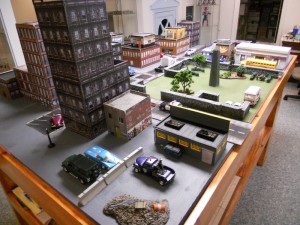 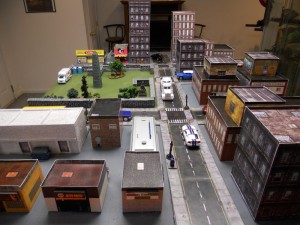 An otherwise quiet day in Manhattan. Ben Grimm, Peter Parker and Steve Rogers are all spending some personal time in the park. Thing is buying a hot dog and feeling sorry for himself. Peter is having a picnic with Aunt May. Steve is on a date with his girlfriend, Bernie Rosenthal. Captain Marvel is on duty at Avengers Mansion (remember, this adventure was from 1984!) 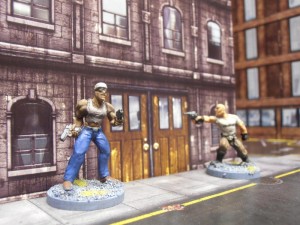 All the heroes notice two well-known goons, Turk and Grotto, entering a building across from the park. They are up to no good! All the heroes in the park start to make their excuses and head over to the building, just as a huge explosion blows out the front wall! Who emerges but Grotto, accompanied by Turk, in full Mandroid armor!

(If you’re asking WTF??? allow me to explain: A suit of Mandroid armor was on display in the lobby of the building. You might think there would be extra security, or that the suit of Mandroid armor would be somehow neutralized for display purposes, like a cannon at a park, but you’d be wrong. It’s just sitting there in a glass case in the lobby, along with the plans for a new power source made by Tony Stark. Or it was. Until Turk stole it.) 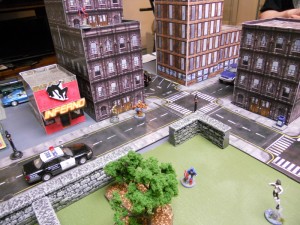 Alerted by the explosion and able to fly at lightspeed,Captain Marvel arrives on the scene instantly. The Thing wastes no time rushing across the street and ruining Grotto’s day before closing with Turk! And at that moment, the super-villains arrive!!! 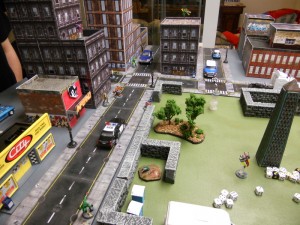 What are they doing here? What could they want? The heroes have no time for speculation, because combat erupts! 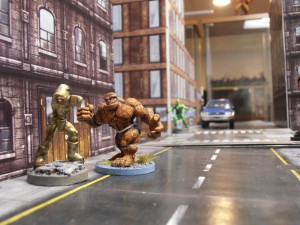 Thing beats up on Turk, but fails to KO him. Meanwhile, Spider-Man webs Turk to the ground. Turk is entangled! 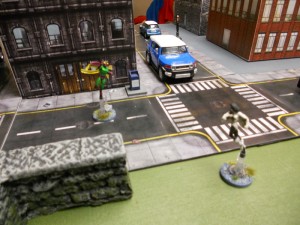 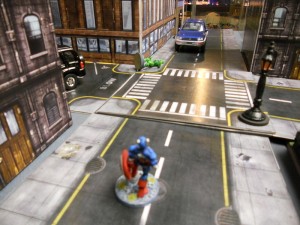 After firing off a blast of radiation at Thing, Radioactive Man gets slammed by Cap’s shield and gets KO’ed instantly! (Cap rolled a ton of goals to hit, and it carried over to damage. Radioactive Man rolled poorly, and that’s all, folks!) 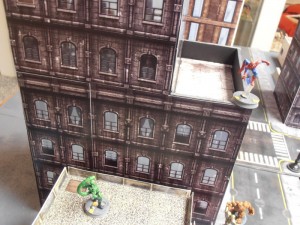 Scorpion shoots at Spider-Man, but fails to hit. In the next round, he bounds atop the building closest to the web-slinger, but before he can close, Spidey webs him to the roof! Meanwhile, Thing takes out Turk once and for all.

On the other side of the park, Captain Marvel gets the worst of it in her fight with Beetle and is KO’ed! Cap takes out the Beetle with a shield toss, and Thing rips up a lamp post and cancels Christmas on the Fixer! With three villains KO’ed, the bad guys bug out and flee the table! But not before a sinister-looking steel tentacle snakes up from a nearby grate and steals the plans for a new power source…the villains’ goal all along! This was but a diversion! Mu-hu-ha-ha-ha-ha!!! 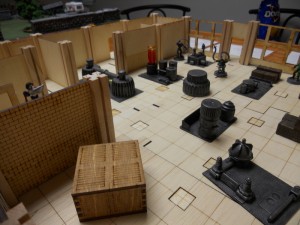 In the original TSR RPG adventure, the heroes had to search for clues to find Dock Ock’s hideout. But we jumped right into it! The heroes track Doc Ock to his lair in an abandoned warehouse, where he awaits them with Scorpion and Constrictor! 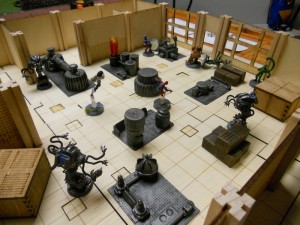 “It’s Clobberin’ Time!” Doctor Octopus barely has time to activate his security robots before the Thing is in his grill. He decks Doc in two rounds, which made for a very quick end to this scenario. Meanwhile, Captain America shield-bashes Constrictor into submission! All in all, not a good round for the villains. But as he lapses into rocky-fisted-induced unconsciousness, Doc Ock manages to activate his most villainous automaton:The Octodroid! 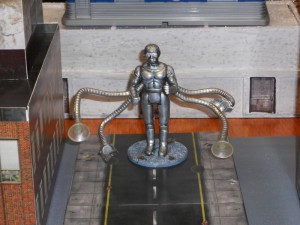 The Octodroid begins its path of destruction, shattering buildings to the left and right. The heroes move quickly to intercept! Spidey tries to web its legs together, but the Octodroid will not be bound! Captain Marvel fires a blast of energy, inflicting damage. In response, the Octodroid pauses its attack on New York to fire at the heroes with the plasma cannons contained in its tentacles, but fails to hit any of them. 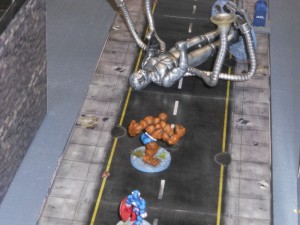 Then after a few more exchanges, Captain America once again saves the day. He hurls his shield with uncanny precision, striking the Octodroid in its eyes! Something shorts out and the Octodroid comes to an abrupt halt, toppling over a few seconds later. New York is saved! (Once again, Captain America rolled a shit-ton of goals that failed to be resisted by the Ocotdroid. Even I was surprised by how quickly the robot fell!)

This was a lot of fun and I plan on adapting more of the published TSR adventures to SS3 soon. Up next: MSH-1: The Breeder Bombs, featuring the X-Men!