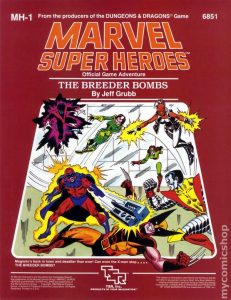 With the holidays over and my Reaper Nativity project done, it’s back to Super Mission Force for some solo supers gaming. I can’t wait until the final version of these rules is available for purchase, because I’ve been having a blast with just the rough play doc versions!

Up next is my adaptation of MH-1: The Breeder Bombs, featuring the Uncanny X-Men! The plots of most of these old  TSR Marvel Super Heroes adventures are pretty ridiculous and terrible, even by comic standards, and this one is no exception. I made some changes to the plot (and some scenarios) as you will see.

As originally written, the module opens up with the majority of the X-Men training in the Danger Room while one lone X-Man is alone in the mansion, making lunch. The Fixer suddenly bursts into the mansion and attacks the lone X-Man. He’s pissed and looking for Wolverine because someone mailed him a videotape of Wolverine killing his partner, Mentallo. Of course, Wolverine is being set up, and when they investigate, the X-Men find a warehouse with robot duplicates of Wolverine and Mentallo, as well as the real Mentallo, captive and alive. He reveals that Magneto is behind the tape, and that his plan is to detonate “Breeder Bombs”, explosives that will force mutations upon all humans, thereby ushering in the age of Homo Superior. Then the X-Men travel to various spots on the globe to defuse these bombs, battling Sentinels, Soviet Super-Soldiers, and finally, Magneto himself, who reveals he’s been set up himself and he’s not behind it after all…it’s all the work of a ROBOT DUPLICATE of Magneto! The X-Men face off against this robot Magneto and his robotic Brotherhood of Evil Mutants in the climactic chapter.

Well, that’s sure a pile of crap for a plot. We are to believe Robo-neto went through all the trouble of making robot duplicates of Wolverine and Mentallo just so he could tape robot Wolverine “murdering” robot Mentallo…all to enrage The Fixer, who is hardly a real threat to anybody. The Fixer decides to get revenge by attacking the X-Men where they live. He’s supposed to be a mechanical genius, but apparently lacks basic common sense to know that he’ll definitely get his ass handed to him in short order if he takes on the whole team by himself. Also, while we’re at it, why not ask why the hell did Robo-neto do this at all? It certainly doesn’t further his Breeder Bombs agenda. Even a robot duplicate of Magneto should have enough sense to know that Fixer can’t take out the X-Men on his best day. So why poke the hornet’s nest and get their attention, which allows them to investigate and find Mentallo, who then reveals the whole plot? Why not just kill Mentallo for real while you’re at it to ensure his silence? No, the whole first 2 chapters are just plain silly. So I modified them for SMF scenario purposes, as you will soon see.

Moving on, the actual Breeder Bombs scheme isn’t bad. In fact, it’s something the real Magneto might actually do. So I decided to dispense with the entire ridiculous robot Magneto/ robot Brotherhood element and just make the real Magneto and the Brotherhood the main opposition in the adventure and modified the scenarios accordingly. The results I hope will be fairly true to the original adventure. Guess we’ll see soon enough!

Before we do that, though, I thought I’d share my Super Mission Force builds for the X-Men. Please note that these violate some of the rules of character creation and team building, but this is hardly competitive play.

All in all, a pretty powerful team. I considered giving Cyclops Resistance (minor) instead or Enhancement, but I think both fit him. He’s an effective leader but also tough to put down. I guess either one would work. Although he doesn’t meet the definition (i.e. he’s not one of the most powerful beings on the planet), Wolverine is a Powerhouse because of the sheer number of powers he has. I think it’s tough to see Wolverine without any of the powers I gave him. Kitty’s Density Decrease power works a little differently than in the SMF rules: while making a Density Decrease attack against anything electronic or robotic, Kitty gets an extra attack die. This represents her unique ability to screw with machinery while phased. Storm’s powers are all a result of her weather control; again, since she has so many things she can do, she falls into the Super category.

Up next, the first scenario: The Danger Room!