I was born a bit too late for the 1967 Spider-Man cartoon, although I watched it in syndication faithfully. When I was a young lad, this is what we had for a Spider-Man cartoon: Spider-Man and His Amazing Friends! The problem, of course, is that that’s a terrible title for what turned out to be a terrible cartoon, and Spider-Man’s friends were not all that amazing.

Spider-Man and His Amazing Friends aired on Saturday mornings here in the USA, back when they played cartoons on Saturday mornings. It starred the voice talents of June Foray as Aunt May and the great Frank Welker as Iceman. It also featured narration courtesy of smilin’ Stan Lee. And yet, it still sucked.

The series ran for 24 episodes, and is technically the first appearance of Firestar (whoopee!).  I say it ran for 24 episodes, but I’m pretty sure my local network affiliate only had access to two of those episodes, because it seemed like they chose to alternate between these two episodes every week. I speak of season 1, episode 5: SWARM!, and season 1, episode 7: Videoman. I’ve seen both of these godawful episodes more times than I care to remember. Until recently, they were available on Netflix, but that seems to no longer be the case here in the USA.

The series had a couple of ok episodes, one featuring Captain America, Sub-Mariner and Dr. Strange and one featuring the Uncanny X-Men (in which Wolverine was inexplicably Australian). But all in all, it was mostly about Iceman and Spidey fighting over Firestar’s attentions. Kinda like if Firestar was Archie, and Spidey and Iceman were Betty and Veronica. Oh, and they had a cocker spaniel who was even more annoying than they were.

Anyway, I have had a painted Spider-Man for a while, and I recently painted up Iceman for another project. So I figured I’d paint Firestar for the hell of it. And here they are. 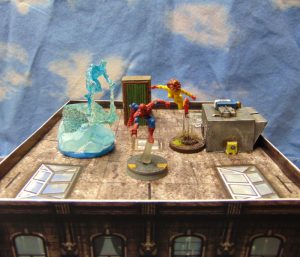 Watch out, true believers! It’s Spider-Man and His Amazing Friends!