The Scenario: Just in time for Christmas, The Toyman has planted a bomb somewhere in the town square! He scattered piles of Christmas presents around, which naturally attracted the attention of the locals. The bomb will go off soon, making this a Christmas to remember…unless Superman can stop it!

Superman’s goal is to find and defuse the bomb before it goes off, and to protect as many civilians as possible. The Toyman’s goal is to make sure the bomb goes off by delaying Superman long enough for it to detonate.

Game length: The game lasts a maximum of 12 rounds, or as long as it takes for the bomb to detonate or be discovered. 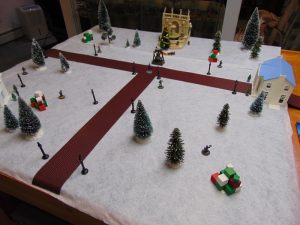 Setup: The play area is a 4′ x 4′ section of  a park or town square. There are several piles of Christmas presents scattered around the area, as well as a few structures, monuments and buildings. Each of these is a possible location for the bomb. Randomly place a face-down counter under each possible location. All of these counters should be blank except for one, which should represent the bomb. (Obviously, if you’re playing this game solo, as I did, make sure you don’t know the location of the bomb.)

Scatter 6 civilian models or counters around the board. Each one represents a hapless civilian who has wandered into harm’s way and who must be protected!

Superman deploys in the middle of the board. The Toyman and the clockwork soldiers don’t deploy at the start of the game. Keep them off the board for now.

The Super Mission Force turn sequence is slightly altered for this scenario. It is as follows:

Civilians: Per the SMF rules, civilians move 4″ in a random direction at the start of the turn. If a civilian wanders off the table edge, he or she has made it to safety. Civilians can also be escorted off the table edge if Superman moves into base contact with them and then moves to any table edge. Civilians have a Body of 2 and are quite vulnerable to attack.

Card decks: This game uses a special card activation mechanic to randomly determine when and where hazards (usually malicious toys) appear. Using a standard deck of cards, make two separate decks (red and black). The red deck should contain as many cards as you have locations (in my case, 7). Assign each location a corresponding card (i.e. Ace = fountain, 2 = Church, etc.) The black deck needs to contain 12 cards, including a Joker. (Ace-Jack, plus the Joker). These cards represent events or hazards that will take place. Feel free to make up whatever events you want based on the Toyman’s hazards (see below). You can use hazards similar to mine or make your own.  The Joker card represents the bomb’s detonation, and you should be sure that at least 4 cards are “no event” to give Superman some breathing room.

8-9: Clockwork soldiers (Toyman’s henchmen) regenerate (if they are on the board and damaged), or nothing happens

10-J: Presents shuffle!  The Toyman has made use of tricky teleportation technology! Randomly swap the places of two stacks of presents, being sure to move the counters underneath with them. This may mean that Superman may have to revisit a section of the board he has already scanned. Depending on the location of the bomb, this may also mean the bomb has moved!

Hazards: Hazards deploy at whatever location is drawn that round. Hazards are there to delay Superman and to cause mayhem. Hazards do not get an initiative roll of their own, which means that until Toyman arrives, Superman automatically will act before any deployed Hazards. A hazard will always attack Superman if he is within range of its attacks or within its charging distance, as appropriate. If not, it will attack any civilian it can reach instead. If neither Superman or any civilian is a viable target, the hazard will move towards Superman at the fastest speed possible. Generally speaking, hazards pose little threat to Superman other than forcing him to spend valuable time dealing with them when he should be looking for the bomb. But hazards are very dangerous to civilians!

Toyman: Toyman deploys at the end of Turn 3. He can appear wherever you want, but I deployed him via a huge present that parachuted into the center of the board. He rolls for initiative as normal starting on Turn 4. Prior to this, Superman automatically has initiative over any Hazards that may have activated.

Toyman also has some special characteristics for this scenario. First, he functions as both a character and a henchman group. When he activates, his clockwork soldier bodyguards activate with him. They move as a unit and can make use of concentrated fire. In addition, the clockwork soldiers function as a type of armor. All damaging attacks on Toyman must target the clockwork henchmen first, removing them as casualties before the Toyman loses any Body. Once all henchmen are destroyed, Toyman takes damage as normal.

Lastly, Toyman can fix any damaged toy (other than his clockwork soldiers) on a successful Chance roll if he moves into base contact with it. Return the toy to full capacity. It can activate as normal on the following round.

Superman: Until the Toyman deploys at the end of Turn 3, Superman automatically has initiative. It should be noted that with Superman’s Speed and Flight powers, he has a Move of 60″, which means he can reach any point on the board from any other point on the board in 1 round. This is good, because he’s going to need it. He has a lot of ground to cover and not much time.

Usually, Perception checks are opposed Free Actions, but not in this scenario. The Toyman has encased his bomb in lead, which means Superman can’t simply use his x-ray vision to spot it. In order to scan for the bomb, Superman must get in base contact with a possible location. Then he must use a Special Action to scan for the bomb. This is automatically successful; if Superman scans for the bomb, reveal the counter at the location. If it’s blank, the bomb is somewhere else. If it’s the bomb, Superman automatically destroys it by whatever method you feel is appropriate (heat vision, freezing it with his super-breath, hurling it into space, etc.)

2 thoughts on “Terror of the Toyman! Part 2”