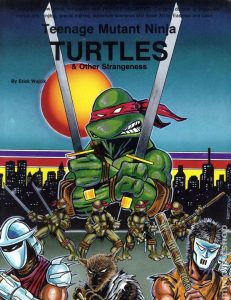 I first discovered Teenage Mutant Ninja Turtles when I was a freshman in high school. It was 1986, a pretty amazing year for comics as a whole. That year would see the publication of Batman: The Dark Knight Returns and Watchmen, two pivotal and iconic stories that would rock the foundations of the comics industry and change comic books forever.

Up until then I only collected Marvel titles, and all of those were in color. Black and white comics, i.e. small press titles,  were unknown to me. Then my friend introduced me to TMNT #7, and I was immediately hooked. I hunted down as many back issues as I could find. They were surprisingly scarce and first printings of the first 3 issues were well above anything I could afford even if I could find copies. I managed to get everything from issue 4 and up, but even to this day I do not own copies of the first three issues. Instead I had to content myself with the First Comics graphic novel, which reprinted all three issues in color. (Prior to this reprint, the only TMNT color material was in a Munden’s Bar story in Grimjack #26. I bought that for the turtles, and ended up becoming a much bigger fan of Grimjack than of TMNT!)

The original turtles, by which I mean the version as presented in the comics prior to the first (1987) animated television series and the (1990) live-action movie (featuring the great Corey Feldman as Donatello), were a bit different than what we know today. The comic, although a parody of Daredevil (among others), was kind of dark. It managed to take itself somewhat seriously even in the midst of its absurd premise. For example: the turtles killed people. Lots of people. Ninja henchmen, mostly, but still people (I guess). When Leonardo slashed with his swords, someone bled. Obviously, this kind of thing didn’t make it into the cartoon, which was unsurprisingly targeted towards children. Also (as we knew from their early colorized appearances) the original turtles all wore red bandannas. The only way to visually distinguish which turtle was which was by the weapons they carried. Among other changes, the cartoon toned the turtles down, outfitted them in different colors, created a catchphrase (“Cowabunga!”) and inexplicably made them go crazy for pizza.

TMNT’s success spawned many imitators and started a “funny animal” comic craze, giving rise to the likes of such mercifully-forgotten titles as Pre-Teen Dirty-Gene Kung-Fu Kangaroos, Geriatric Gangrene Jiu-Jitsu Gerbils, and the Adolescent Radioactive Black Belt Hamsters.  None of these were any good. All of them were pretty blatant ripoffs. Nonetheless, the Hamsters seemed to enjoy the most success as a poor-man’s Band-Aid in between the irregular TMNT publishing schedule.

My friends and I got so hooked on TMNT that we played many hours of the Palladium RPG: Teenage Mutant Ninja Turtles and Other Strangeness (see above). This, in turn led us to Heroes Unlimited and later, briefly, RIFTS, before we abandoned the Palladium system altogether in favor of other games.

Before we did this, though, I managed to get my hands on these TMNT miniatures, released in very limited numbers from Dark Horse (yes, THAT Dark Horse). These figures go for a pretty penny nowadays, especially the other releases in the line (like the Mousers). I remember I bought this pack on Martha’s Vineyard on a day trip. Retail space isn’t cheap on the Vineyard, so who would have thought that Martha’s Vineyard would have had a comic shop, never mind one that sold miniatures, too? (Aside: even though I live on the South Coast of Massachusetts, I haven’t been back to the Vineyard since I bought these, mainly because I hate boats.) They’re supposedly 25mm scale, but they’re more like 15mm. Between my awful paint job, Donatello’s miscast staff, and Leonardo’s broken sword, they’ve seen better days…

And so, when I heard Wizkids got the license for TMNT Heroclix, I was happy. When I saw this set marked half off at the FLGS, I didn’t hesitate. Here’s what they looked like out of the box: 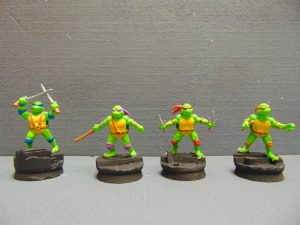 It appears I’m unlucky with turtle miniatures. Brand spankin’ new, both Leonardo and Donatello suffered from bent weapons that can’t be fixed. Bummer. They’re also all a  bit too bright and cartoony for me. I knew I wanted to repaint them as the original badass turtles of my youth.

Here is the result: 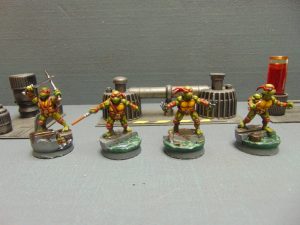 To continue my run of bad luck, somewhere in the painting process I appear to have broken one of Raphael’s sai. Drat! I based them on Armorcast sewer bases that I purchased specifically for this project. I don’t know if I will ever use them in a scenario, or what system I would use if I did; but, since Super Mission Force is my current favorite gaming system, here are my SMF builds for the Teenage Mutant Ninja Turtles:

Aside from the weapons they favor, the turtles aren’t much different. The easy way to build them for SMF is to make them all the same.

Of course, that’s not much fun. The other way I would do it is to make them all Wild Cards. Yes, I know that is against the “two wild cards per team” rule, but who really gives a shit? In this case the turtles would lose the Scrapper power (which is one of the best major powers in the game, IMHO), but would gain powers that would represent their personalities; in other words, make them different from each other in tangible ways. All of them are turtles who can kick ass, but they fill certain roles within the group: Leonardo is the leader, Donatello is the brain, Michelangelo is the clown, and Raphael is the hothead.

(I couldn’t really think of a fourth minor power that would “define” Michelangelo, so I chose the “Clever” Boost purely for the team initiative bonus, since the turtles are rarely caught flat-footed). Mike has a tendency to ride around on a skateboard, so I guess you could substitute the “Fast” Boost instead, which would increase his movement by 4″.)

This little rush of nostalgia was so much fun I reread the first three issues of TMNT last night. And….well…let’s just say some things are better left in the past.