It’s Zombtober, and I’m getting a late start. I missed the first week. Therefore, I worked twice as hard this week to get my submissions in. I decided to do a bunch of zombies and a survivor to catch up. 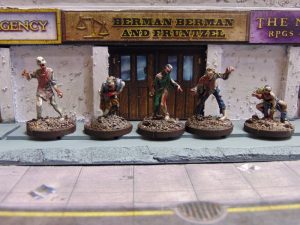 These zombies are from Reaper’s Bones line. You get all 5 in a pack for 7 bucks! They’re all pretty good sculpts, I’m particularly fond of the second one from the left and the one all the way on the right. These were the first miniatures I ever underpainted after priming; meaning I gave them all a light drybrush of white over the black primer before adding the colors. It was a technique I was unfamiliar with, but now that I’ve tried it, I can say it works terrific at picking out the detail on models, allowing me to easily see where clothes end and skin begins. It even picked out the wounds and bite marks the zombies have, making painting them easier. I’ll be using it again. My eyes aren’t getting any better with age, so any help is a good thing.

What do you do when you’re outnumbered five to one? Have the right tool for the job. This minigun should be just what the doctor ordered… This is Felicity, from Hasslefree. She’s one of the “not-Mystery Machine crew”; basically she’s Daphne from Scooby-Doo with a minigun. As cool as that is, I decided to paint her differently and not stick to her regular colors.

Here’s a quick shot of Felicity in action.

Next Sunday is my next Zombtober submission. Hopefully I’ll get some other stuff done before then, though, so watch this space!