A few nights later we picked up where we left off. My friend Chris couldn’t make it, so we decided this was that moment in so many comic books where the two hero teams combine to fight a common enemy! Matt quickly chose Captain America as his new, combined hero team leader. He figured if there was one guy besides Professor X that Cyclops would defer to, it would be Cap.

The heroes got initiative.

SNIKT! Wolverine charged down the alley and ripped into Dreadnought #1. His adamantium claws are pretty impressive against mindless robots. He netted 6 Vitality of damage to the Dreadnought, dropping it to 1 and kniocking it back 5 inches!. Despite this, Dreadnought #1 was barely able to remain upright. But the Dreadnought’s electrified armor shocked him back for 7 Vitality! (Turns out we were doing this wrong; Wolverine shouldn’t have been shocked for anywhere near that much damage. But what the hell. It’s cinematic.)

In response, Dreadnought #1 ran forward and attacked Wolverine, but missed.

Iron Man fired of a repulsor blast at Ultron and hit. What’s impressive is he actually managed to do 3 Vitality worth of damage, as Ultron rolled miserably to resist.

In response, Ultron attempted  to telekinetically grab Iron Man and bring him into hand to hand. Problem is, that’s not how the power works. TK grab just roots someone to the spot. Even if it succeeded (which it didn’t), it wouldn’t have left me with a  lot of tactical options; but since I had already spent the points to use the power this round, I was stuck with it. The first of several of my blunders.

Storm used her wind control to transport both herself and Colossus 9″. Then they landed.

Dreadnought #2 attacked Wolverine and hit; combined with his Damaging Aura, the attack did a total of 4 more Vitality damage and knocked him back 2″ into the wall of a nearby building.  Wolverine was starting to look pretty battered.

Cyclops fired at Dreadnought #2, but missed. 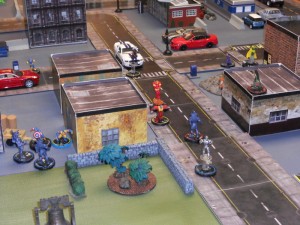 Madame Hydra used her short-range teleport ring to get to the top of a nearby building. Once there, she took a shot at Storm and hit, but Storm managed to avoid any damage.

Colossus moved towards Ultron, intent upon closing with him in hand-to-hand combat next turn.

Dreadnought #3 fired at the approaching Colossus and hit, but the big mutant just shrugged it off.

From behind a pile of junk, Hawkeye took a shot at Ultron and hit, but did no damage.

The Vision floated towards Ultron, still intangible and out of sight for any ranged attack.

Captain America threw his shield at Dreadnought #3, and scored a whopping 17 goals on his attack! The end result, however, was not as impressive: the Dreadnought suffered 4 Vitality worth of damage, leaving it with 3. Cap used his remaining AP to move through the alley to assist Wolverine next turn, retrieving his shield along the way.

The initiative was a tie, broken by Captain America’s higher AP total. The heroes went first.

Storm took off and blasted Madame Hydra with a lightning bolt, but missed.

Ultron used his Dominate power on the weak-willed Colossus and succeeded, meaning he would be able to control Colossus when Matt activated him next. Then he moved back into the park. 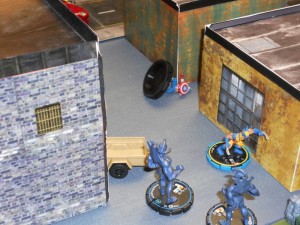 Captain America flung his shield in a spray attack, attempting to hit both Dreadnoughts, but only hit  one. It resisted all damage. In return, Dreadnought #1 charged Cap and attacked, scoring enough net goals to drop his Vitality to zero and knock him back into the building. (Matt really rolled terribly on his defense rolls.) Captain America was KO’ed! 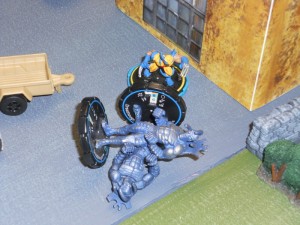 Wolverine spent 4 AP to Regenerate, scoring 8 goals, restoring 8 Vitality! Back in the fight, he used 6 AP to Flurry, scoring a net of 7 goals of damage on each Dreadnought, enough to destroy them both! Take that, Bub! Then he moved past their smoking and sparking bodies towards Ultron, his intentions obvious.

Dreadnought #3 used all his power pool for his Damaging Aura and left nothing for Ranged attack, so if he wanted to do anything, he’s have to attack in melee. I knew that Colossus wouldn’t fight back, so I figured I might take the opportunity to do some damage to Colossus. This was blunder #2. The Dreadnought charged and did 2 Vitality of damage, knocking Colossus back 4″ and knocking him prone.

Iron Man shot at Dreadnought #3 and hit, but did no damage. Then he flew atop the same building as Madame Hydra, getting into position to ruin her day next turn.

But Madame Hydra teleported away, this time to the street. She shot Cyclops for 5 Vitality of damage, almost knocking him out. Then she used her remaining AP to close the gap, moving into hand-to-hand.

Cyclops fired at Madame Hydra at point-blank range and missed. Maybe he was still seeing stars from her shot.

Hawkeye took a shot at Madame Hydra, attempting to Entangle her. He missed, and also missed Cyclops, who he could have hit by accident.

The Vision continued to drift closer to Ultron, still intangible.

Of course, Matt waited until the last possible second to activate Colossus, who was mine to control. Unfortunately for me, I had to spend 2 of Colossus’s measly 5 AP just to stand up after being knocked prone by the Dreadnought. Even with his extra movement, Colossus couldn’t reach Hawkeye this turn to punch him into next week like I wanted. And at the end of the turn, control of Colossus reverted back to Matt.

With Cap KO’ed, Matt nominated Cyclops as his new team leader. This allowed Ultron to seize initiative for the first time this game. 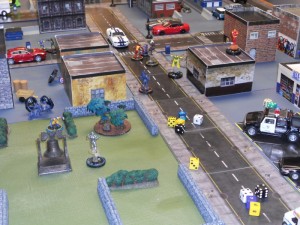 With Wolverine bearing down on him, Ultron did the sensible thing. He fired at Wolverine with full power. Unfortunately, he missed. So he did the next best thing. He used his remaining AP to move farther away. 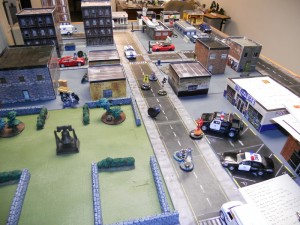 That didn’t help him for long. Wolverine charged and easily closed the gap, but despite scoring 8 goals to damage Ultron, the robot was able to resist all damage.

Madame Hydra shot at Cyclops at point-blank range, but she missed.

Vision finally got into the fight and tried a phase attack against Dreadnought #3, but missed.

Colossus charged into combat with Madame Hydra, attacking her from behind and knocking her senseless. Madame Hydra was KO’ed!

Hawkeye successfully Entangled Dreadnought #3, rooting it to the spot. Despite this, Iron Man still missed when he shot at the Dreadnought moments later.

Ultron, now alone, faced the combined forces of Iron Man, Vision, Hawkeye, Cyclops, Storm, Colossus and Wolverine. It was pretty clear he’d be defeated eventually, and it was getting late, so we called it a night. Victory to the heroes!