I just love Rattrap’s Professor Kroon. He reminds me of Dr. Weird from Aqua Teen Hunger Force. Here is the old-style Professor Tobias Kroon with a small army of Kroonbots. I painted them up a while ago for use with .45 Adventure but I haven’t got around to playing any scenarios with them yet. 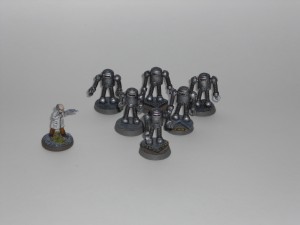 The Type II Robots are a personal favorite of mine, although they would have been a cast-iron bitch to put together with a pin vise instead of the Dremel I used. I bored a hole through the bodies of each robot and inserted a 3/64 mm brass rod through the body to pin the arms. Attempting to attach the arms without pinning would have been impossible.  I decided to go with the Cylon look for the optical sensors. The bases are from Micro Art Studios.

Rattrap recently released new miniatures for their most popular characters for the .45 Adventure 2nd Edition. Although I like the new Professor Kroon model, I didn’t feel the need to buy it as the old one is just as good, IMO. (I do like the new Jade Hood model much better that the old one, though.)

I have a scenario idea kicking around in my head for my players to attempt to thwart a nefarious alliance between Professor Kroon and Bob Murch’s Radon Zombies of the Ionosphere.