One of my friends has been pestering me to play a zombie game on my table for a while now, and I figured it was about time for some No More Room in Hell. The last time I played the game was also the first time I played it; and while I really loved the game, I didn’t like some of the mechanics. So I fiddled with the system, came up with some house rules (see below) and got familiar with the rulebook over the last week or so.

One of the big problems I had the first time around was that my survivors kept getting trapped in melee endlessly simply because they were too close to a zombie spawn point. By the time they dealt with whatever zombies they were fighting, they were unable to move away before they were instantly charged by a zombie and the whole cycle started over again. So, for example, my survivor ends his activation within 6″ of a spawn point. The zombies spawn, and because one spawns within 6″ of the survivor, it charges into melee. Next round the survivor activates first, but all he can do is melee with the zombie, he can’t move or shoot. Whether he beats the zombie or not, he’s effectively stuck in the same spot until the next zombie activation. If enough zombies are spawned, he may be facing the same situation next round. This becomes more and more likely as more and more zombies join the melee. Sooner or later there will be too many to defeat. But it’s just not fun to be stuck in one spot.

The rules have no way of getting out of melee once you’re in it aside from either getting killed or killing your opponent. You may retreat as you’re being charged, but who wants to do that? And even if you did, it wouldn’t prevent the above situation from happening, assuming you found yourself close enough to a spawn point again.

So I made a house rule. You can attempt to leave a melee assuming you have initiative. If you’re facing one zombie, you need only pass a FISTS check (one zombie isn’t hard to fake out). However, if you face more than one zombie or any number of survivors, you must succeed in a difficult SURVIVE check (2 successes), which is a lot harder to do. If you fail, you’re stuck in combat and can’t retaliate that turn. This also makes it pretty much impossible for Sheeple, who only have a SURVIVE score of 1, to ever voluntarily leave combat. But then again, they’re supposed to die.

My other house rule has to do with zombie feasting and zombie movement. Normally, zombies move towards the closest survivor, period. My house rule states that zombies move towards either the closest survivor or the closest zombie feast, whichever is closer.  Once the feast is over, normal zombie movement is restored. So it really only affects one turn, as zombies only feast for one turn. It gives the survivors a little break every once in a while.

Next I threw together some Survivor Groups for me and my two friends. I decided to go with a 70’s Blaxploitation theme to the game, because I love those movies and because I have the miniatures. I wish I had the time to throw together an appropriate playlist before the game but I didn’t.  (the Pulp Fiction or Jackie Brown soundtracks would have worked well.) I decided to collectively call the Groups the Soul Survivors. Although Group on Group combat is accounted for in the NMRIH rules, we decided to play a cooperative game. Three different groups deploy separately, but with the shared goal of meeting the mission objectives and getting the hell out alive. 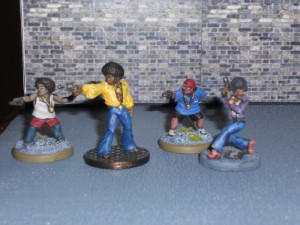 The Fist of FUNK!

First up was my group, led by Spartacus Jones, the Fist of Funk (Shot-Caller). He’s backed up by the lovely Foxxy Dynamite (Back-Up). Behind them is De’Andre and Cyrus (both Sheeple). 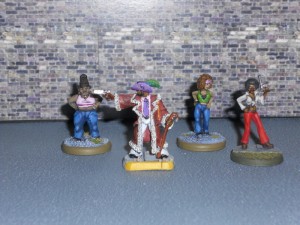 Next is the group led by Mr. Wisdom, the Earl of 139th St. (Shot-Caller). Backing him up with her Colt Python is Lady Chardonnay (Back Up), and her two girls Mo’nique and Yu’nique (both Sheeple). Mo’nique is the big one. 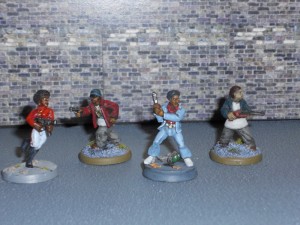 They call me MISTER Magnum!

Lastly, we have the group led by Honey Velvet and her submachine gun (Shot-Caller). She’s supported by Rameses Magnum in his powder blue suit (Back Up), and B-Train and Lorenzo (both Sheeple). 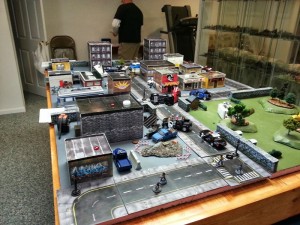 The mission was a Supply Run, the goal of which is to obtain one unit of food or ammo or fuel per survivor. All the SURVIVE ocations are marked with a red glass counter. There are three unique locations: The Gun Shop, currently barricaded up (wonder what’s in there?); The Med Stop, and the Food Mart. All of them have a water bottle cap on them to denote their unique status. There are many vehicles scattered around the table; any that could possibly be used have a small key-shaped screw on them. And away we go! 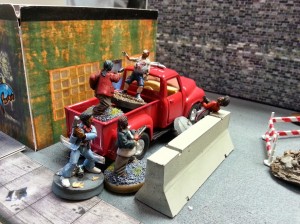 Maybe we can get this started.....GAAAAH!

We deployed our Groups separately. Honey Velvet and her crew made a beeline for the closest vehicle, an old pickup. (Astute readers may notice the color of the pickup changed from blue to red. That’s because my friend wanted a pickup that looked like the one from Sanford and Son.) B-Train hopped in and tried to start it up, only to find a zombie inside! B Train found himself in Monstrous Melee on Turn 1! He managed to hold it off for this turn…

Elsewhere, Mr. Wisdom and his girls made his way around a building towards a spawn point. Mr. Wisdom has the special ability to destroy zombie spawn points, an ability he put to good use in this game. He didn’t make it this turn. 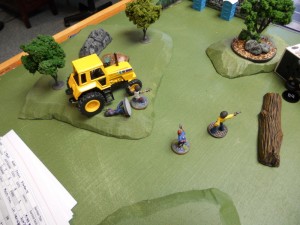 Meanwhile, Foxxy Dynamite moved quickly over to an abandoned tractor (a SURVIVE location). One quick exploration later, she discovered a battery operated television broadcasting the fateful last newscast of a doomed anchorman as he became zombie chow on camera! She rolled on the Fear Reaction table, and was so traumatized by what she saw that she collapsed and was suppressed for 2 turns! Spartacus Jones got into a good firing position, as it was time for the zombies to activate! 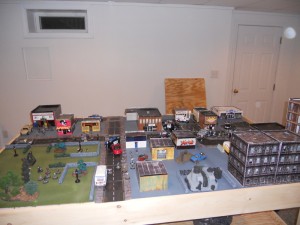 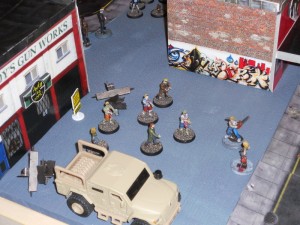 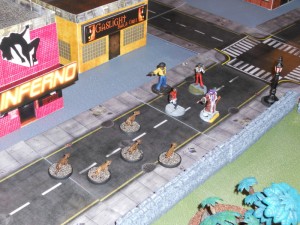 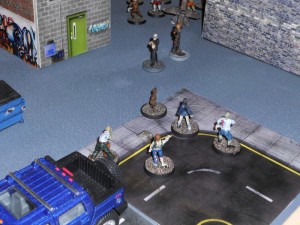 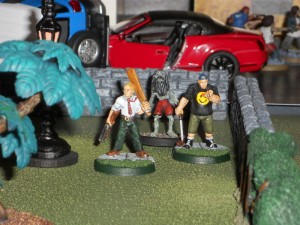 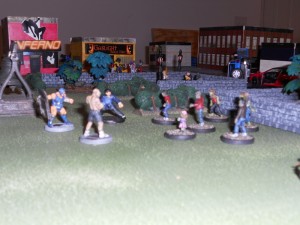 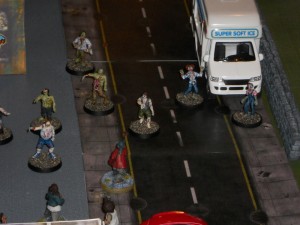 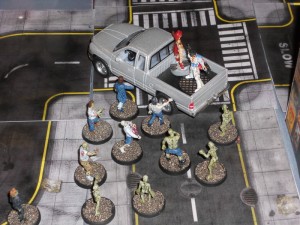 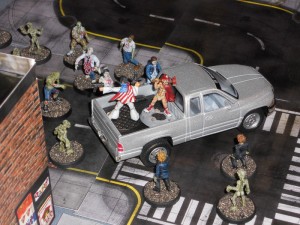 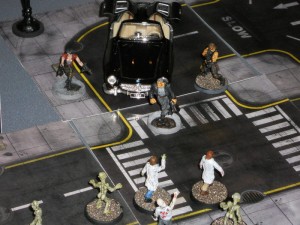 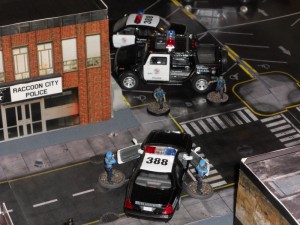 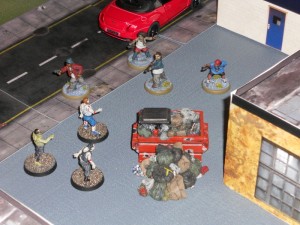