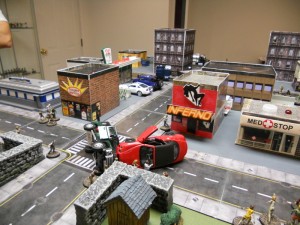 Well, I thought I had more pictures of the end of the game, but I guess we got pretty caught up in the excitement and forgot to take them. So, rather than go turn by turn, I’ll try to remember the general narrative for the rest of the game. First, Spartacus and Foxxy had a harrowing turn as the zombies swarmed the vehicle. But the windows withdtood their assault and Spartacus managed to get the Hummer started the second time around. He roared away, plowing though a group of three zombies on their way to the convenience store. The Anti-zombie rating isn’t very high on a vehicle ( I guess because zombies can easily survive being hit by a truck, as trauma isn’t much of an issue when you’re dead.) Despite this, Spartacus ran one zombie down and Foxxy shot another in the brain-pan as they drove by. They got to the convenience store, but couldn’t do anything else.

Honey Velvet, Ramses Magnum and Lorenzo fought their way through the zombie horde on the side of the gun shop, but poor Lorenzo’s shotgun picked a critical moment to run out of ammo and he was pulled down screaming.

Mr. Wisdom, Lady Chardonnay and the girls were pretty much free to act, as Mr. Wisdom had removed the threat of the spawn points in their immediate vicinity. They began to move towards their side of the board in search of more SURVIVE locations. 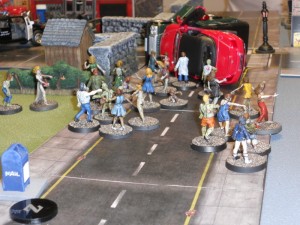 Meanwhile, with Spartacus and Foxxy gone, the big horde of zombies in the middle of the board now turned their attention towards Honey Velvet and Ramses Magnum, as they were the closest survivors. Honey Velvet ran across the street to a boarded-up diner and made her way inside, where she found a Lumberjack’s Chainsaw just lying on the table. Ramses Magnum stayed behind to cover her and fired off a few shots at an approaching zombie, killing it for good.

Mr. Wisdom and his crew fought off a few more zombies, continuing to move towards their table edge.

Spartacus Jones and Foxxy Dynamite jumped out of the Hummer. Spartacus ran into the convenience store and looted it for 5 Units of Food! Foxxy stayed outside to cover him as the zombies began to approach…

On their activation, the zombies all moved towards the closest survivors. Three of them followed Honey Velvet into the diner, but that was a mistake. Honey fired up her new toy, and the lumberjack’s chainsaw decapitated all three rotters just before it ran out of gas! Whew! 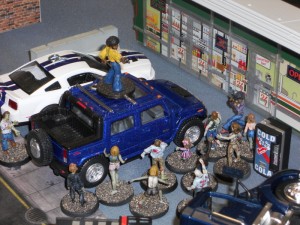 "Get back in the truck, Foxxy!"

The horde swarmed Foxxy Dynamite before she could get back in the truck. She fought poorly and ultimately went down beneath a mass of rotting zombie bodies.

Spartacus Jones jumped in the Hummer through the sun roof and took off, leaving Foxxy to her fate. He sped towards Ramses Magnum and Honey Velvet, intent on picking them up. With only 7 survivors left, they had fulfilled the victory conditions of the scenario: we had one unit of food for each survivor. Time to get the FUNK out of here!

Ramses and Honey were able to enter the Hummer on their activation, and Mr. Wisdom and his crew were able to safely walk off their edge of the board, since no zombies were anywhere near them. The next turn, the Hummer sped off the board. Victory for the survivors!

My friends all expressed interest in campaigning NMRIH using these same characters, so there’s a chance you may see more adventures of the Soul Survivors in future posts! Stay tuned!

1 thought on “The Soul Survivors: A No More Room in Hell AAR Part 3”