Took a break from my usual stuff to paint up some more Heroclix for use with Supersystem 3. 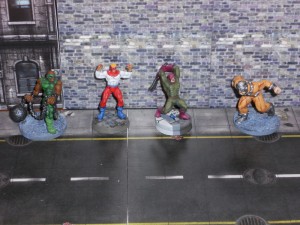 First up: The Wrecking Crew. Thunderball, Piledriver, The Wrecker, and Bulldozer. Although they’re a bunch of losers, I’ve always like the Wrecking Crew. I have to say that the Piledriver miniature is one of the worst miniatures in the Heroclix line. He doesn’t even scale well with the other Crew members. I really like the sculpts on the other three, however. 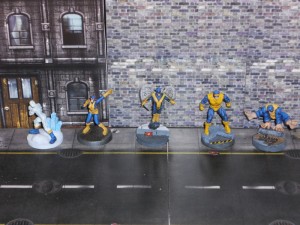 Next up: the original Uncanny X-Men! Iceman, Marvel Girl, Angel, Cyclops, and Beast. I’m pretty happy with the team overall. Iceman’s base is the only one I made from scratch, the rest are modern urban and tech bases from various companies. I was reminded how much I hate painting yellow when I did this team, as yellow is notoriously difficult to shade without it looking like crap. I think Cyclops looks the worst, but I can live with it.