I decided to make some wetlands/marsh terrain for some games after viewing WargamerDad’s tutorial on Youtube. I really like the look of his swamps, so I copied him and here is the result. 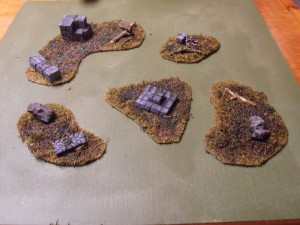 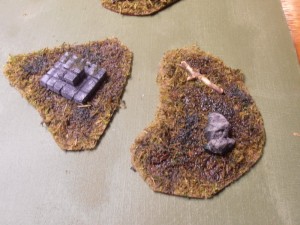 Some differences do exist, however. WargamerDad used Hirst molds for his ruins, and they look great as you would expect. I just sculpted mine out of pink insulation board. I found the Terrain Tutor’s tutorial on this helpful. I particularly like the dais on the left. I can use it to hold a statue or an idol, or it can be an objective marker in itself. 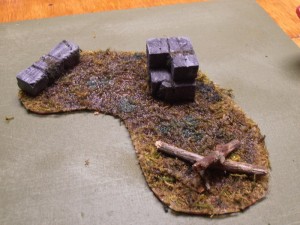 I completed this project on my vacation, smack in the middle of Dwarvember. The problem is the water effects solution is still tacky after 2 weeks. It’s much better than it was, but for something that’s supposed to cure in 8-10 hours, this isn’t cutting it. The stuff I used is called Quick Water for Silks, and you can find it in the floral section of your local craft store. Reading the reviews of it may discourage you, however. 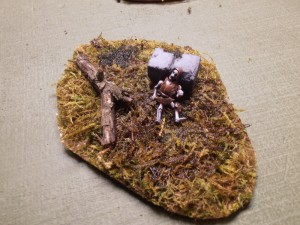 I finally found a use for this old GW skeleton, who had been in my bitz box for about 25 years. He was missing a skull, so I found him one, put it in an old conquistador-style helmet, and here you go.

The “water” has finally cured enough that I can put miniatures on it and it’s not coming off on my fingers. So I guess I need to play a game!