I have decided I am going to build a dedicated gaming table. Actually, to be honest, I’m just going to hold the tools and buy the beer and the materials, since I can just about use a screwdriver without losing an eye. My brother is going to build it for me, since he actually knows how to build shit. Like his garage, which he built by himself. 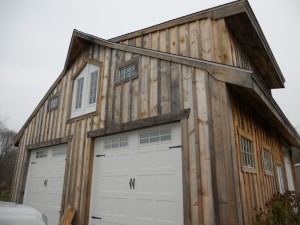 And some interior shots of the garage/workshop. He’s still adding a staircase to the upper level. 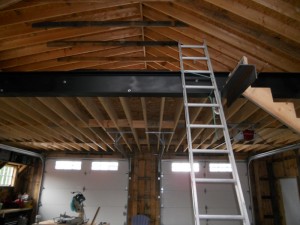 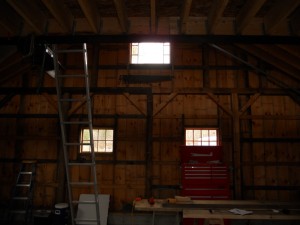 Needless to say, a gaming table isn’t beyond his ability. In fact, it’s hardly worth his time, seeing how he doesn’t share my hobby and thinks that grown men who play with miniatures are obviously dorks.

This table is a kind of last-ditch effort to get my friends into playing miniatures games every once in a while in addition to our regular RPG sessions. The first problem I encountered was convincing my brother to build a gaming table to my standards and not his. Namely, a basic, no-frills 8’x4′ table with some shelving underneath, made out of pine 2×4’s and some plywood. As I get older, I play less and less. So I didn’t want anything fancy. Merely something that could be a game table for now, and one day be used as a workbench, since in all likelihood that’s what it will eventually become.

My brother had other ideas, mostly involving building me an artesanal table out of hardwood, with a fold-away playing surface and lots of drawers and storage options. I had a hard time convincing him that this was a utilitarian piece of furniture. Meant to hold scenery and miniatures and be able to stand up to large men leaning on and over it. He had lots of great ideas on how to make a really nice table, but all I need is a bare-bones playing surface.

My lack of artistic vision and aesthetics, at least when it comes to stuff like  this, disgusts my brother.

After realizing just how fucking big an 8’x4′ table is, I decided to shorten it to roughly 6’x4′. The official dimensions of the table are 74″ L x 48″ W x 38″  H. There will be a 1 1/8″ recess on the top of the table to hold 1″ pink board tiles (which are the gaming surface). There will also be 2 shelves below the playing surface, roughly the same dimensions as the tabletop.

Yesterday we started building the table. Here’s what we got from Home Depot. (The table saw isn’t mine). 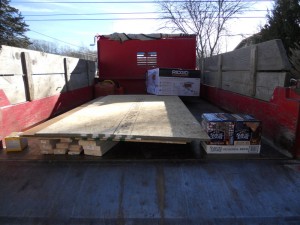 On the way back to the workshop we stopped for beer. Real, actual beer. Not the “Coors Lite” my brother drinks.

We got all the initial cuts done. I even used a mitre saw without losing any digits. We manged to knock together the frame for the tabletop before it got too dark and we called it a day. (My brother doesn’t have lights in his garage yet. Or anything resembling heat.)

I’m going back tonight to finish it off. Hopefully it will be installed and ready for play by the end of the week.