So real life and the holidays got in the way for a while, but the gaming table is finally finished. I had to make another trip back to Home Depot for some last minute incidentals. I can’t remember how much I spent, but let’s just say the gaming table cost me an even 400 bucks in materials and beer. A heartfelt thanks to my baby brother.

My brother did a bunch of work on the table on his own, since I wasn’t able to get to his house as often as he liked (not that he ever really needed me there) and it was taking up room in his barn. Notice I referred to his garage/workshop as a barn. That’s because my brother read the two previous blog posts and has since set me straight:

“It’s not a garage, asswipe. It’s a fucking post-and-beam barn. If it was a fucking garage it would be made out of the same shit we built your table out of, not rough-sawn lumber. And it would have been put up in a day, not two months.” That’s pretty much verbatim.

Also, my tabletop is not (emphasis on the not) MDF board. It’s something else that I forget. Of course, it looks an awful lot like MDF board to me, but my brother has loudly and repeatedly assured me it is not.

So on my brother’s birthday(of all days) he decides to load up the table into his truck and drive to my place, where we will finally set it up in a room I have set aside for gaming. Of course, it didn’t really work out that way, because I am an idiot. I didn’t measure the doorway. To put it simply, the tabletop went in fine. The frame didn’t fit.

Of course, we tried for about 2 hours. In the cold. Still wouldn’t fit.

So since my brother insisted on making this table to his bare minimum standards, the hardware was under facing boards and wood glue. Everything had been sanded. We couldn’t just take a couple of legs off and work our way in. We had to cut the table in half. Well, he cut the table in half. I stood there in shame and tried my best not to utter a sound.

So, after reassembly with an additional crossbrace and some bolts, here is the table. Right next to my painting area. 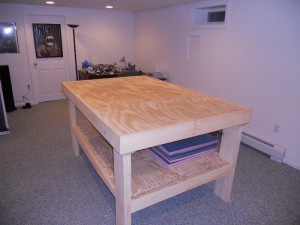 My brother constructed the tabletop out of a sheet of plywood cut into three panels. That way I can use it as a workbench, which I will be doing very soon as I construct some World Works Games buildings. When I want to game, the panels lift out to reveal the emphatically not-MDF board game surface beneath. Like so: 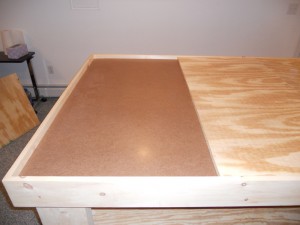 Note the shelf underneath holds some modular pinkboard. It’s supposed to be 2′ x 2′ square, but like almost everything else sold at Home Depot, the measurements are off. (“Square” is defined differently at Home Depot.) I bought six and painted one side green and one side gray, for rural and urban terrain surfaces. Once the plywood panels are off the table, the pinkboard fits right in and is held snug by the framing boards. Like this: 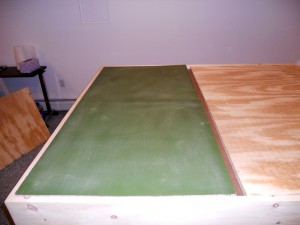 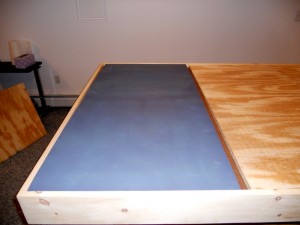 At least that was how it was supposed to go. Even foamboard this small warps, and each one of the tiles is warped in some way. That plus the aforementioned shitty Home Depot dimensions makes them a bit of a problem. You can’t really tell from the picture, but it can be a very uneven join. I can get around this by covering the joins with roads, or I can just do what my brother says and get one big piece of foamboard, make sure it fits the table, then make my own cuts. More work and more painting, but whatever.

My brother is insisting I re-sand the table, especially since he had to cut it again. He’s also insisting I stain it and polyurethane it. I told him I’d think about it. But I’m definitely not waiting to do any of that before I use it.