I was warned this would happen. I have officially been bitten by the Gaslands bug. I guess that’s why I decided to convert some buggies next. 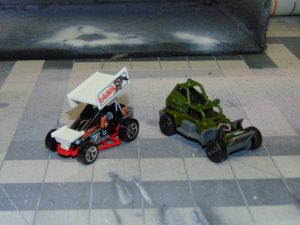 These are what I started with. I bought both of these cars brand new (a dollar apiece at soon-to-be-gone Toys R Us). The one on the left is a Hot Wheels car, the one on the right is Matchbox. Both are open-topped buggies. I really like the look of the one on the right. It has two front seats and a raised back seat, perfect for a gunner! 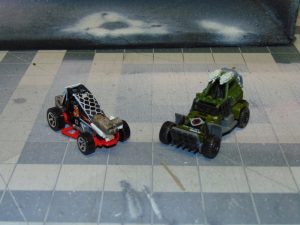 Buggies are light vehicles in Gaslands, meaning they’re pretty much just there to cause as much trouble as possible before they blow up.  I put minimal armor on the frames, since armoring up a buggy is a waste of a build slot, IMO. Still, I wanted the overall “Road Warrior” aesthetic…

Nitro Burn, on the left, had that ridiculous I-don’t-know-what on his roof, so I got rid of that immediately. For “armor”, I glued some some wire mesh to his canopy and some styrene to his back window. I gave him a GW storm bolter as a front-mounted machine gun and stuck a flamer tank to the side as a nitro booster.

Oil Can Harry, on the right, got two space marine bolters mounted on his roll cage as machine guns. I made an oil slick dropper from an old heavy flamer nozzle (pointed downward) and some flamer tanks. For “armor”, I covered his front and side windows with plastic mesh, and gave him a spiky front bumper. 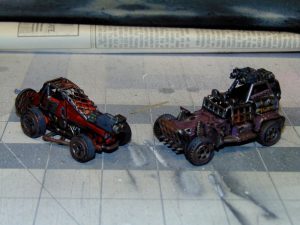 Here’s what they look like after some painting and weathering. After priming both black, I used a mixture of Reaper, Cote D’Arms, Vallejo, Army Painter and GW paints. Nitro Burn got a basecoat of Black Red (V), highlighted with Rusty Red (R), while Oil Can Harry was based with Dusky Grape (R) and highlighted with Faded Purple (R). The metal on both buggies was Gunmetal Grey (V) and the wheel rims and guns were Gun Metal (CD). The gun casings were painted Necromancer Cloak (AP). The colors on both got a wash of Nuln Oil (GW), while the metallics were washed in Armor Wash (CD). I also used some Dawnstone, Administratum Grey and Tin Bitz (all GW) to pick out some dinged up and rusted spots. I used some Stirland Mud and Typhus Corrosion (both GW) where it made the most sense. Lastly, I applied some MIG Rust pigment to all the “armor” and to the rims.

As a final touch, I decided to have a little fun with Nitro Burn. I attached an old GW Fantasy round shield to his rear, painted up like a smiley face. I figure Nitro Burn likes to live dangerously. He likes to taunt his opponents by speeding ahead of them, forcing them to look at that infuriating yellow smile. Naturally, that face is a prime target for weapon fire, so I drilled a small hole and stuck an arrow in it, no doubt fired by some enraged wasteland scavver! 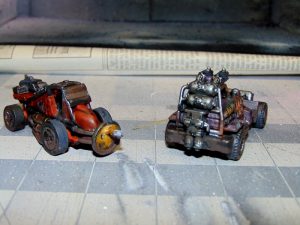 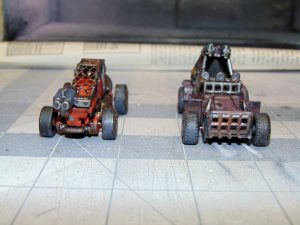 My next Gaslands project is a doozy, but I think I’m going to try to paint something non-Gaslands related first.

But I make no promises.

5 thoughts on “Gaslands 2: Nitro Burn and Oil Can Harry!”