Well, I said I would post something that wasn’t Gaslands, but I lied. I’m too hooked. My Gaslands kitbashing continues on, with my first “big boy”. Ladies and gentlemen of the wasteland, I present: MARSTORIUS!!!! 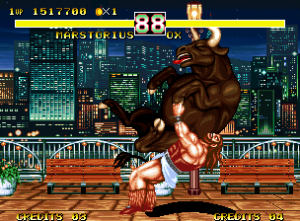 I got the name from an old fighting game. Marstorius was a big wrestler from Fighter’s History. Here he is giving a bull a suplex, because as everyone knows, bulls are assholes. Marstorius was a poor imitation of Zangief; but that’s hardly surprising as Fighter’s History was a poor imitation of Street Fighter II. I like the name, and it fits my latest project nicely.

I need a bully: someone whose sole purpose is to ruin the day of anyone he meets. Someone who can dish out a curb-stomp like no one else, but can also take whatever punishment comes his way with a bloody, gap-toothed smile. In other words, I need an armored bus. 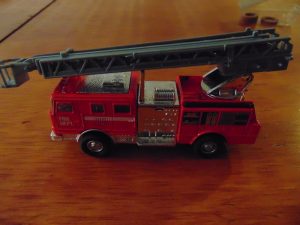 I started with this fire truck. It’s not a Hot Wheels or Matchbox; it’s sold at CVS and made by a Chinese company that makes cars that are (mostly) compatible with 28mm miniatures. In fact, I own a lot of those cars and you can see them on After Action Reports all over this blog, if so inclined. This fire truck is the same size as most of their cars, which of course means it’s totally out of scale (i.e. too small) with the rest of their line, but it is perfect for “Hot Wheels” scale, as it’s much bigger than a standard Hot Wheels car (about the size a fire truck would be next to a HW car). Hopefully that makes some kind of sense.

Anyway, the first thing I did was remove the side ladder, the siren lights and the extending ladder. The extending ladder could come in handy for use as scenery in other games. Removing it left me with an empty bracket on a 360° rotating platform, which is perfect for a turret emplacement. 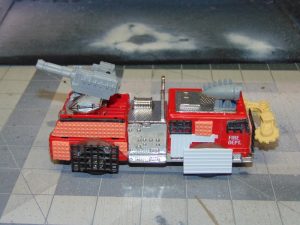 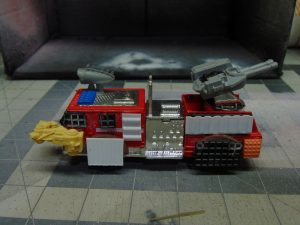 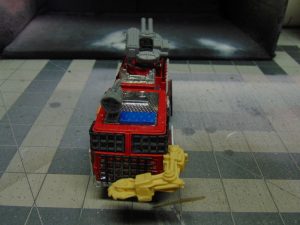 Many of the scenarios in Gaslands are races, or variations thereof. Being an armored bus, Marstorius won’t win any races, but that’s not his job. His job is to make sure YOU don’t win any races.

With that in mind, I attached a turret from a Matchbox tank to the extending ladder mount, giving it a heavy machine gun with a 360° field of fire. This will allow targeting pretty much anywhere in range. Then I added the armor. Lots of styrene sheeting, craft foam and plastic mesh slapped all over this baby. It’s armored EVERYWHERE. I had some leftover rubber gaskets I had bought to replace on my outdoor faucets, so I cut them and fitted them around the wheel-wells of the truck so the armor panels wouldn’t be attached to the truck directly, and wouldn’t affect wheel rotation.

I knew I wanted a ram on the front, so I went with this buzzsaw arm. It’s an extra bit I had from an Armorcast Frank-N-Steam model I bought years ago. They don’t seem to make that model anymore, but it’s a variation of the other “Frank” models, only with two legs. I can just see Marstorius turning any vehicle foolish enough to get in his way into an instant convertible! I stuck a searchlight on the top and some auto-launchers on the back, both from old Leman Russ tank sprues. (Gotta love the bitz box!) The auto-launchers represent caltrop droppers, lest any pursuers get too close. It is unwise to tailgate Marstorius.

In Gaslands, a bus has 3 Build slots. The heavy machine gun, caltrop droppers and the front buzzsaw (ram) take up a slot each, which means the armor I festooned Martsorius with is pretty much just for show. If I wanted to make him tougher, I could forego the caltrop droppers for some extra armor instead, making him more like a war rig than a bus. He’s certainly big enough! 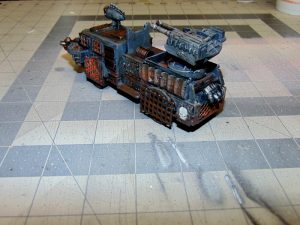 Here’s how he looks painted up. I used a mix of Army Painter, Cote D’Arms, Games Workshop, Reaper and Vallejo paints. Marstorius’s body and the turret is based with Necromancer Cloak (AP), with a highlight of Ash Gray (R) and Concrete Gray (R), then given a wash of Agrax Earthshade (GW). The armor plating was painted with either Gunmetal Grey (V), Gun Metal (CD) or Tin Bitz (GW) before being washed with Armor Wash (CD). The buzzsaw wires were painted various colors and given a wash of Nuln Oil (GW). I used some Stirland Mud and Typhus Corrosion (both GW) to further the grimy look. Lastly, I used some MIG rust pigment on the armor and body. 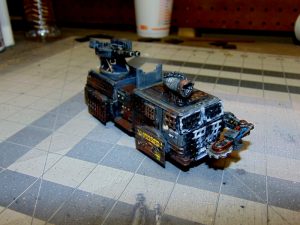 It’s not as obvious as I would like, but I painted this skull visage on the front of Marstorius’s cab. It’s tough to see behind the buzzsaw arm, but it’s there. I painted it with some watered-down white paint to simulate a spray paint effect. 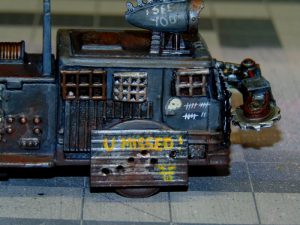 I decided to add some other small touches, like this hash-mark tally of the vehicles Marstorius has sent to the junk heap. I free-handed the grafitti on the armor panels and searchlight and added the bullet holes with a Dremel. 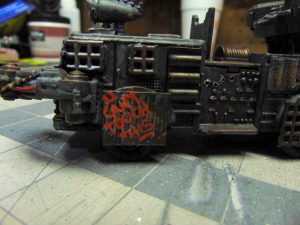 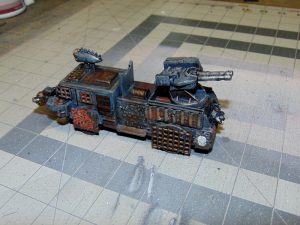 Another shot showing the rotation of the turret. That’s an old GW tank decal on his rear side panel.

Overall, I’m happy with my armored bus. I have some other cars in the works, so watch this space for more Gaslands conversions, coming soon!