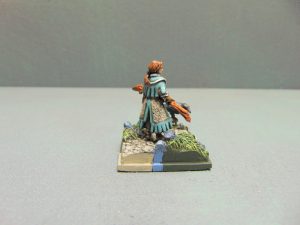 A brief intermission, if you will permit me, from all things Gaslands.

If you’re a longtime role-playing gamer like me, then you probably have a character or two somewhere that you would have liked to play more often than you were able to. This is one of mine.

When my friend Chris decided he wanted to run an AD&D 3.5 campaign about 10 years ago, I decided I would play a standard (non-specialist) wizard. (Prior to this, my only real experience playing a magic-user was a 2nd ed. AD&D campaign back in college, when I played a shameless Raistlin ripoff; and a MERP game where I played an acrobatic Dunedán mage. Please don’t ask.) Chris’s campaign was called Jamestown, and it involved the political intrigues of rival brothers against a backdrop of standard monster-slaying and fantasy ass-kickery that you would expect from an AD&D game. Like many games and campaigns I have played in over the years, it was over too fast, as lack of time and the responsibilities of real life soon got in the way.

In Chris’s world, mages are rare and mysterious, and command a certain respect simply by virtue of their profession. Aryllus was a young and talented wizard with a calculating and detached manner. He was soft-spoken and carefully considered his words and actions. Although he was certainly capable of laying down offensive magics, Aryllus was more of a support player in the party. I chose a wide variety of spells for him that would enhance allies and hinder enemies, rather than having him go full Tiltowait (kudos if you get that reference!) all the time. Aryllus was content to let the fighters fight and the cleric heal. His job was to make their jobs easier.

Sometimes he forgot that. Like when he tried to blast the gates of a fortress open with a Fireball spell. Since the fireball wasn’t explosive, all it did was light the gate on fire. Dumb.

Aryllus had a raven familiar named Corax (original, I know). Corax was useful as a scrying tool; Aryllus could see through Corax’s eyes and could instantly communicate with his familiar over a respectable distance. Corax had his own personality and was essentially a second character. I found the interplay between the two to be a lot of fun. 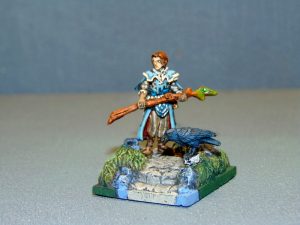 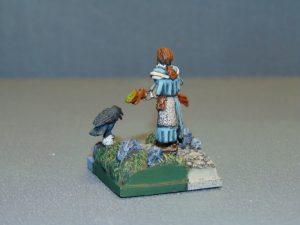 I’m not sure why, but I had a lot of trouble painting this figure. I couldn’t settle on a color scheme that I liked and I just kept putting it off. Since I’ve been painting up my favorite RPG characters lately, I decided it was high time for me to finish Aryllus. This miniature has been in my side pile for around ten years, with only a basecoat of blue paint on his jacket. He is Reaper’s Piers, Young Mage (02836), sculpted by one of my favorite artists, the great Sandra Garrity. He shares an Armorcast gallery base with Corax (a Reaper familiar from Familiar Pack VIII). I bought the miniature long before I created the character. When I decided to play a mage I used this figure for inspiration.

For whatever reason (perhaps my failing eyesight), this miniature looks much better in person, away from the unforgiving high-resolution camera lens. I must admit that in the pictures, he looks kind of sloppy in some places, but the flaws are not as glaring to the naked eye. Anyway, he’s done now, and out of the side pile. And he’s not going back.

Up next: more Gaslands! Vrrrrrooooooooommmmm!!!!!