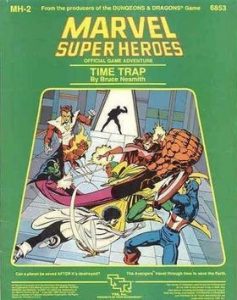 It’s been a while since I’ve posted an After Action Report, and Forgotten Heroes has given me a hankerin’ for some supers gaming. I’ve decided to convert another old TSR Marvel Super Heroes RPG module to Super Mission Force. This time around: MH-2: Time Trap, featuring the Mighty Avengers!

The antagonist of this adventure is none other than Kang the Conqueror, who is generally aggravated that—despite being a master of time travel—he keeps losing to the Avengers every time he tries to take over the world. The Avengers annoy Kang, so Kang comes up with a surprisingly good plan to deal with them: make sure they never exist. Disguising himself as Immortus (his future, somewhat good-aligned incarnation), Kang invents a story about how a huge solar flare will destroy Earth in a few days unless the Avengers can stop it. In order to do so, they must travel back in time to stop several key events from happening, thus ensuring the solar flare is never triggered.

In reality, Kang is sending the heroes back in time to undo their own existence. He figures that if the Avengers never form as a super team, he will have a much easier time conquering Earth. The Avengers must discover Kang’s plot and turn the tables on him lest they be trapped in time forever and lest Earth fall prey to Kang’s tyranny. 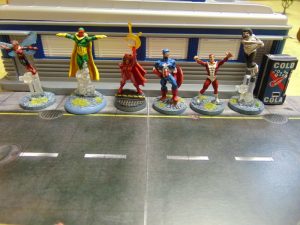 The Avengers team roster for this adventure consists of (L-R) Wasp, Vision, Scarlet Witch, Captain America, Starfox and Captain Marvel (and a cola machine). Not exactly the powerhouse team from the movies, but a solid slice of 1980’s, Bronze Age comic history, when Scarlet Witch was nowhere near as powerful as she is now and someone thought it would be cool to put Starfox in the Avengers. 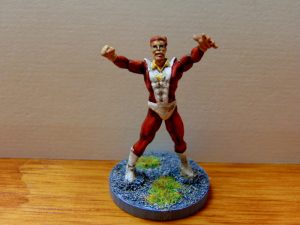 As with any TSR Marvel adventure, adapting it to a miniatures game like Super Mission Force will require some tinkering. The general trend in TSR Marvel adventures is one encounter/battle per chapter. Often the villains battled are lame, and the super team can deal with them without too much trouble. This works better in a roleplaying game than on the miniatures table. For example, in my last Super Mission Force campaign, based on the adventure The Breeder Bombs, there was a chapter where the X-Men fought the Soviet Super Soldiers. As originally written, the X-Men travel to the USSR and fight the Crimson Dynamo and a bunch of Soviet Super Troopers (basically armored henchmen). To draw a clear picture, that’s Cyclops, Storm, Kitty Pryde, Rogue, Colossus, Nightcrawler and Wolverine vs. the Crimson Dynamo and a bunch of scrubs. That may be fun in a roleplaying game, but in SMF, the Russians are going to get their asses kicked pretty damn quick. Henchmen are rarely much of a problem for most heroes, and a team as powerful as the X-Men would wade through henchmen groups in no time. So I changed the opposition to the entire Soviet Super Soldiers team, and it was much more of a challenge. I will have to do similar altering of the original module for this campaign as well.

Here are my Super Mission Force builds for the Avengers:

NOTE: In order for Captain Marvel to use her Speed or Flight powers, she MUST use and/or maintain Density Decrease first.

Looking the team over as a whole, it’s pretty powerful by SMF standards, with one Powerhouse and two Supers. As usual, I ignored the SMF rules on team composition, opting instead to be true to the established characters. I think it’s pretty tough to imagine these heroes without the powers listed, even if that makes them more powerful than a typical SMF team would be. They’re the Avengers, dude! Don’t sweat the small stuff!

Up next, Scenario One:  The Menace of The Mimic!